Hyakunin Isshu (One Hundred Poets, One Poem Each): Poem 44 (Fujiwara no Asatada) 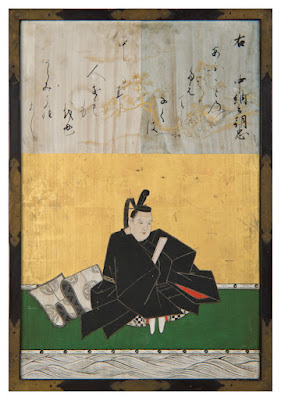 [Fujiwara no Asatada by Kano Yasunobu]

Commentary
"If would never have met her, I would not have to resent her coldness or my own distress."

Two interpretations are possible:
(1) "love unable to meet again" - the poet complains about a cold lady who will not see him again (due to the dangers and complications this would entail); this is the way Teika reads it, and also how I have translated it.
(2) "love before the first meeting" - the poet complains that the woman has not yet consented to let him come to her at night. Were there no such thing as love, he would on the contrary be happy and would not resent her nor feel sad himself. Then the translation would have to be:

Notes
taete: (not) at all
nakanaka: on the contrary
hito wo mo mi mo: neither others (her, his lover) nor myself
-mashi; suffix of conjecture, used in "if...then..." constructions 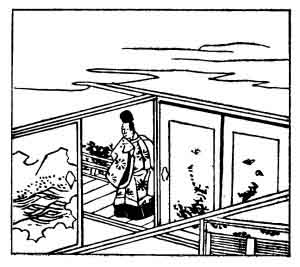 The Poet
The writer of this poem was the fifth son of the Minister-of-the-Right Sadakata (poem 25) and was counted among the Thirty-six Poetic Geniuses. 21 of his poems have come down to us in various imperial collections.