No flower could be more Japanese than the camellia. It was traditionally seen as the herald of spring and popular as a cultivar in gardens, but it was also used frequently in chado and ikebana. The ornamental plant was favored in many arts as poetry, paintings, sculpture, textiles and ceramics. The camellia was a favorite design in kimono and wood carvings. It appears in the oldest records but also the Tokugawa favored it - the second shogun, Hidetada, collected rare specimens and created a camellia craze in Edo. 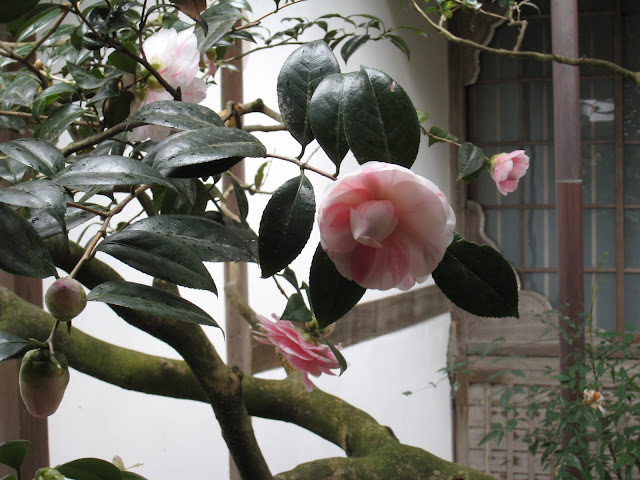 The camellia is an evergreen plant native to Japan and the rest of East Asia. In fact, it belongs to the same family as the tea plant. Camellias add a touch of color and brightness to gardens in the heart of winter. On top of that, the thick glossy leaves reflect the light, making the tree a mysterious presence in dark forests. Camellias are called tsubaki in Japan and chahua (tea flowers) in Chinese. The Latin/English name was given by Linnaeus and of all things based on the name of a Jesuit botanist, Kamel. The small trees grow to between 2 and 20 meters. The glossy leaves have fine toothed margins. The tubular flowers are large; color varies from deep red to pink and white, and sometimes yellow. They have a central boss of golden stamens. The best known species is the Japanese Camellia, which grows to 6-9 meters and has red, five-petaled flowers of 5-8 cm. More than 2,000 hybrids have been developed of this plant. The tea plant, by the way, is called Chinese Camellia – making the genus Camellia important not only horticulturally, but also economically. 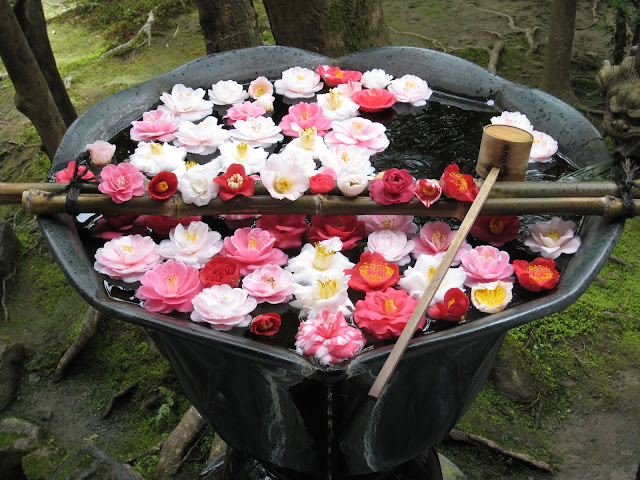 In Kurosawa’s film Sanjuro, the main character when asked for his name, sees a camellia and therefore calls himself "Tsubaki." For a samurai this was thought to be an unlucky association, by the way: the flower of the camellia drops off whole, like a human head falling... The seeds of the camellia were used to obtain "Tsubaki oil," which was used as hair oil for the high coiffures of ladies and men's top knots. Engelbert Kaempfer gave a visual introduction of the camellia to Europe in his book Amoenitatum exoticarum that was published in 1712. The first real flower reached Europe a few decades later, around 1739, from China. Von Siebold brought new specimens back from Japan to Europe in 1829. Camellias were introduced to America’s New England greenhouses in 1797. 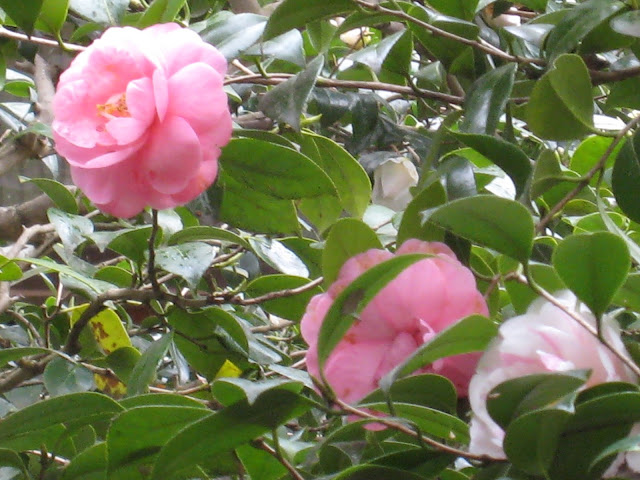 Camellias have been widely loved in Kyoto, in its old temples and aristocratic villas, as well as in homes of warriors and merchants. Wild camellias add splashes of red to Kyoto’s eastern hills with their pine trees, the northern hills with their cypresses and the western hills with their bamboo. In the city itself, famous cultivated trees bear poetic names and provide charm to hedges and gardens. Most beautiful are the camellias of the eastern hills, in temples as Honenin and Reikanji (both open in the first week of April), but also Shisendo. When camellia flowers fall off, they become red dots on the mossy ground or are carried away by small streams.