Enlightenment Guaranteed (Erleuchtung garantiert) is a German film from 1999 by Doris Dörrie about the tribulations of two middle-aged brothers staying in a Japanese Zen monastery. The brothers are played very naturally by Uwe Ochsenknecht and Gustav-Peter Wöhler.

The story is has a deep human touch, but is also light and humoristic - as light as the swinging movement of the hand-held cameras and the improvised street scenes. The first part of the film, situated in a town in Germany, is full of snappy comedy. One brother, Uwe, is a smart kitchen salesman who thinks he is doing very well, but is so engrossed in himself that he does not notice how much he is neglecting his wife and kids. So they suddenly leave him which makes him tumble into a psychological black hole. 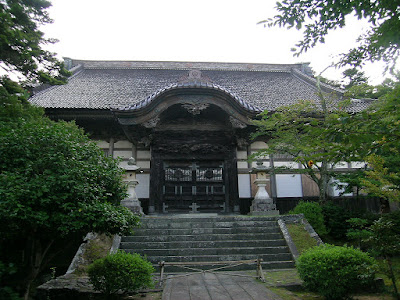 「Sojiji temple in Noto where the brothers end up studying Zen]
The other brother, Gustav, is a rather vague Fengshui consultant who in his free time practices Zen meditation. He has booked a trip to the Monzen monastery on the beautiful Noto Peninsula in rural Japan for a few weeks of intense meditation practice and like his brother he is so lost in his quest for enlightenment that he doesn't notice the needs of his wife.

After he suddenly finds himself alone, Uwe begs Gustav to take him along on the trip to Japan. After some hesitation on the part of Gustav, who considers his non-Buddhist brother as pure ballast, they leave together and their first stop is Tokyo.

On their first night in Tokyo, while going into town for a snack, they get lost and can't find their hotel where their passports and luggage are anymore. The brothers spend their last money on a taxi ride in the wrong direction and their credit cards are swallowed by the difficult-to-understand Japanese cash machines.

They really are at Point Zero in their lives and even have to sleep on the streets. This is Lost in Translation to the nth degree! In Buddhism you have to go back to nothingness and discard all earthly possessions, but the situation is forced upon them rather suddenly!

First they sleep in cardboard boxes in a park, among Tokyo's homeless, but Uwe, whose practicality now comes in handy, "fixes" a modern tent. Later they meet several interesting people, such as a German woman who helps them find a job in a Bavarian-type beer-hall where they work as waiters to earn the money for the long trip to Monzen.

Next follows their stay in Sojiji, the famous Soto Zen temple in Monzen, Ishikawa Prefecture, which is like we know all stays in Zen temples to be: cold, hard, little sleep, little food. Clean the floor to cleanse your heart. Sweep the garden to sweep your mind. This part is filmed in a more traditional way, with nice impressions of the Buddhist service (this is a very special ceremony where the monks walk as if in a Noh play - joining this service alone is worth the trip to the Noto Peninsula). The temple scenes are interspersed by commentary from the brothers on Uwe's video camera, as a sort of video journal.

Surprisingly, it is Uwe who excels not only in running along the floors with a cloth to clean (Gustav is rather corpulent) but who also bests his brother in meditation practice. In a reversal of roles, he really gets the hang of it, although Gustav also struggles bravely on.

The time to leave the temple finally comes - the brothers have not reached anything like enlightenment (impossible in such a short time!) but they are both a bit wiser and have learned to accept life as it comes. Thus spiritually fortified, they return to the world.
Posted by Ad Blankestijn

It is a mystery why publishers can't keep their hands off titles in translation. The English title of this book, the rather bland Tokyo Fiancée is in the original French Ni d'Ève Ni d'Adam, "Neither of Eve, nor of Adam" as used in the expression "Ne connaitre ni d'Ève Ni d'Adam" which means "to be totally in the dark about something."

The author must be talking about the intercultural misunderstandings that are central to this highly funny and engaging novel. 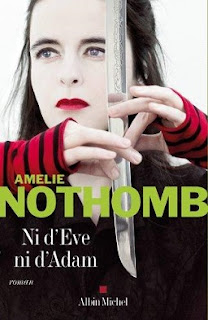 The author Amelie Nothomb was born in Japan of Belgian parents - her father served as consul and later ambassador. After a paradisaical five years in Japan as a small child (described in The Character of Rain, another book with a different title in English) duty calls Amelie's father to China, and later Belgium. It is only after her university study that as a young woman she again returns to Japan, full of hope to renew the acquaintance with the country of which she has such beautiful memories. How the hope of a career at one of Japan's foremost companies was crushed, is described in an earlier novel, Fear and Trembling.

Tokyo Fiancée takes place mostly before she enters corporate life, when she is studying Japanese in Tokyo for a year. "The most efficient way to study Japanese, it seemed, would be to teach French" the protagonist of the novel, Amelie correctly observes. Her first and only pupil is a nice young man trying not so hard to study French, Rinri. It is 1989, the height of the Bubble Period and they meet in an upscale cafe in Omotesando. Rinri, it appears, has rich parents, a white Mercedes and for the rest just floats through life, "playing" as he calls it ("Playing what?" asks Amelie, until a friend tells her that the Japanese asobu is a description for the state of not being engaged in work or study.)

Although Amelie and Rinri become friends and lovers, this is not a love story: the temperature is tepid at most, and the relationship is hampered by intercultural misunderstandings - as the later office work would be.

A funny misunderstanding also occurs in her Japanese class, where she has the habit of raising her hand and asking the teacher all kinds of questions, almost causing heart attacks:


"One must not ask questions of the Sensei," scolded the teacher.
"But-if I do not understand?"
"You understand!"
I now knew why language instruction in Japan was so wobbly.

It is indeed true that children in Japanese schools are sometimes taught not to ask questions.

But back to the relationship of Amelie and Rinri. It struck me how large the role played by food is in their friendship. When at the beginning of the story Rinri invites her to dinner at the home of a friend, he cooks okonomiyaki (with Hiroshima sauce), the favorite dish of Amelie who spent her early youth in the Kansai.


"The aroma of cabbage, shrimp and ginger sizzling together carried me sixteen years into the past, to the era when my gentle governess Nishio-san would concoct the same treat for me, and which I have not tasted since."

Prey to a deep emotion, Amelie looses her veneer of civilization and devours her okonomiyaki, "with eyes glazed over, and uttering faint little cries of delight."

Other dishes also mark her amorous relation with Rinri. At Rinri's place, both indulge themselves with Swiss-cheese fondue, made in a sort of high-tech contraption that gives the cheese the taste of molten plastic. At a certain moment Amelie playfully dips her hands into the fondue so that a thick layer of fake cheese gives her gloves. As she can't wash her yellow mittens off, she tries to scrape the cheese away with a kitchen knife, cutting her palm. "The boy" (as she class Rinri) then gets down on his knees and delicately uses his teeth to scrape the polystyrene from Amelie's hands.


"Never in my life had I been so confounded by gallantry. [...] The episode had been a catharsis for him. He took me in his arms and kept me there."

This could well have heralded the start of a deeper relation, but Amelie feels only "koi" and no "ai" for Rinri. When they climb Mt Fuji together she races to the top, while he follows as a panting wreck, something which seems symbolical of their relationship.

Another food event seals the beginning of the end of their relation. On a winter trip to the island of Sado, they have little octopuses for dinner, kept alive until the final moment so that they are still as fresh as possible.


"It would be impolite to refuse the dish. [...] I shoved it into my mouth and tried to plant my teeth into it. Then the most dreadful thing happened: the octopus's nerves, still alive, fastened into my tongue with all its tentacles. And would not let go. I was screaming as loudly as you can scream when you have had your tongue swallowed whole by an octopus. I tried to detach the beast with my fingers: impossible, the suction cups were firmly stuck."

Later that dinner, Rinri proposes marriage. Futile, of course, although Amelie doesn't not want to hurt his feelings and for many months puts off giving a clear answer. But the sticky octopus was an unfortunate prelude - needless to say that there is no happy marriage in their future.
Posted by Ad Blankestijn