Chugen (or o-chugen) now refers to the mid-year gift-giving season, but in China the term originally meant the 15th day of the 7th month.

It was a day to celebrate the well-being during the first half of the year of friends and acquaintances, and at the same time people believed that it was auspicious to entertain someone on this day. 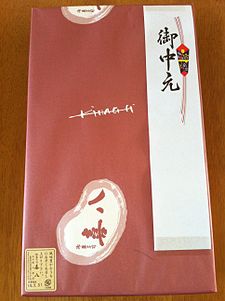 As it was traditionally held around the same time as o-bon, it was also a time to honor the ancestors.

Those beautiful religious (Buddhist and Daoist) connotations are now forgotten in the superficial commercialism that only serves to help department stores survive (there is a second gift-giving season at the end of the year, o-seibo).

Send your gifts (with expensively packaged food items you can never go wrong) from early to mid-July to those who have supported you professionally or privately - business relations, teachers, guarantors - always your superiors.

Department stores and other shops set up special sections where you can select chugen items and have them forwarded directly to the recipient.
Posted by Ad Blankestijn