The Chinese author Feng Menglong lived from 1574 to 1645, in what is now Wuxian (near Suzhou) in middle China. He was a writer who mainly edited and compiled histories, novels, story collections and even almanacs. As such he was an important popularizer, making classical stories available to a wider public. At that time there flourished already an urban culture in China and books were printed as a commercial venture (after all, China invented book printing long before Gutenberg). But Feng Menglong also added many stories of his own. 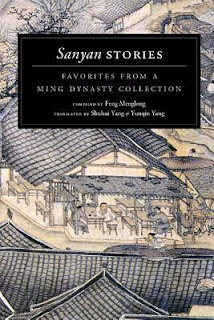 His most important works are the three story collections known as "The Three Words" (Sanyan Stories): Gujin Xiaoshuo ("Stories Old and New," later renamed "Illustrious Words to Instruct the World"), and its two sequels. These stories are, with a modern term, very "naturalistic," they show people blinded by lust or ignorance so that they commit enormous crimes. Retribution is always shift and merciless. The first collection of 40 stories was published in 1620. It has been called a pivotal work in the development of vernacular fiction in China.

What makes the stories so attractive is the detailed depiction of daily life. We not only meet emperors, magistrates and scholars, but also monks and nuns, courtesans, peddlers, craftsmen, shopkeepers, and ghosts. It is almost like the great Dutch paintings of the 17th century, which also show you daily life and ordinary people. The streets of Ming-China come miraculously alive in these tales (although most of the tales have been placed in the Song-Dynasty, in order to evade criticism by the authorities that might follow if Feng wrote about his own times).

I first read Feng Menglong in Dutch, in the translation of Wilt Idema, my Professor of Chinese Literature at Leiden University. His first volume of eight tales, called "The Ape of Lust" (De Aap van Begeerte) was published in 1973. Later he translated another 5 tales in "The Three Words" (1976, De Drie Woorden). Unfortunately, these Dutch books have long since vanished from bookshops and are even difficult to find secondhand. That is a pity, as Idema's translations are racy and very vernacular, while remaining also true to the diction of the original Chinese text. (See below for an English translation of Feng Menglong).

Feng Menglong's stories are a long cry from Zen. His personages are chained to the Wheel of Samsara by lust, desire, hatred, anger, ambition, avarice, ignorance and what-have-you-not. People kill as easily as smashing an insect, sons even do their parents in. Their is no morality in these people, and the only meager solace we get is that a sort of combined Buddhist-Confucian retribution follows, which restores order and sets the balance of Heaven right again. That, too, is only a naturalistic process. Feng Menglong demonstrates how, under the wrong circumstances, perfectly ordinary persons can sometimes become monsters.

Many of the stories are crime tales, although we do not meet Judge Dee (who belongs to the earlier Tang-Dynasty), but Judge Bao (Bao Zhen), who, in fact, in China was and is a much more famous figure than Judge Dee.

In Feng Menglong's stories, terrible crimes start from the most insignificant of causes, and when the chain of causality has been started, we see that humans are nothing but the powerless slave of their own "ape of lust." Feng tells his bizarre stories with detachment and even cynicism, at the same time mixing in humor by imitating the naive style of the vernacular story teller.