Despite the invasion of American sodas, there are still quite a lot of native non-alcoholic beverages - some of them very healthy - doing the rounds in Japan, for example: 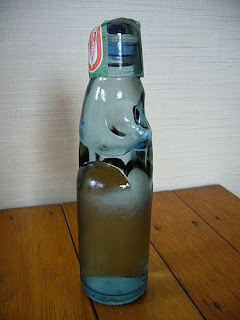 We start with a purely nostalgic product. The carbonated soft drink Ramune (from "Lemonade") was first brought market in Kobe by Alexander Cameron Sim (1840-1900), a Scottish pharmacist. Although Ramune rather tastes like an ordinary soda, it is the "Victorian" glass bottle that makes it interesting. Called a Codd-neck bottle after its inventor Hiram Codd, when you buy it the bottle is sealed with a glass marble. The marble pushes against a plastic (in the past rubber) gasket/washer at the top of the neck and is held in place by the pressure of the carbon in the drink. You have to open it by pushing the marble inward with a plastic pin which sits in the cap of the bottle. The marble falls into the neck of the bottle which has been formed into a special shape so that the marble remains there and nicely rattles round when you are pouring. Ramune therefore was popular with children in Japan and reminds people here nostalgically of summer festivals and childhood. It is a symbol of summer. 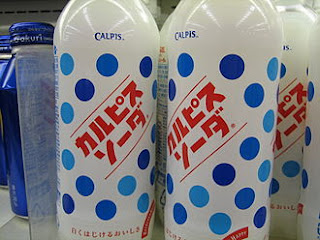 Ramune is a rarity, but Calpis can be found in every street corner convenience store and supermarket in Japan. For obvious reasons called "Calpico" in English speaking countries, Calpis combines the "cal" from calcium with "pis" from the Sanskrit "sarpis" (butter flavor). It has a somewhat milky and slightly acidic flavor, thanks to the fact that it includes nonfat dry milk and lactic acid, and is produced by lactic acid fermentation. It was first brought to market in 1919 and quickly became popular. The idea for Calpis was born when the founder of the Calpis company, Mishima Kaiun, traveled in Inner Mongolia and came across a traditional cultured milk product called "airag," which also contained natural lactic acid. Nowadays there are various variants of the drink, including a Calpis Soda and Calpis with different fruit tastes. 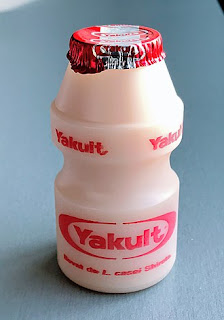 Although not a soft drink but a health drink (reason why it is marketed in mini portions), Yakult should not be left out as this Japanese product is not only available everywhere in Japan, but has also conquered worldwide markets. It is a probiotic dairy product made by fermenting a mixture of skimmed milk with a special strain of the bacterium Lactobacillus casei Shirota. The Yakult drink was created in 1935 by scientist Shirota Minoru. The name "yakult" was derived from "jahurto," which is Esperanto for "yogurt" (although Yakult in fact is not a yogurt).

Like Calpis, another not very happily named popular drink is the non-carbonated
sports drink Pocari Sweat, which was brought to market in 1980 by Otsuka Pharmaceutical. It was so named when it was developed (originally for the Japanese market alone) as it has the function of supplying water and ions (electrolytes) which are lost during transpiration, for example during sports or otherwise in the hot and humid Japanese summer. It is also good after a hot bath, or first thing in the morning. As it approximates the electrolyte concentration in the human body, it is quickly absorbed. 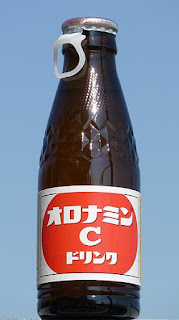 Another well-known drink sold by Otsuka Pharmaceutical is the health drink Oronamin C. This carbonated health drink is sold in characteristic small glass bottles and contains isoleucine and other essential amino acids as well as vitamins such as vitamin B2, vitamin B6 and vitamin C.