The Art of the Cook in Zhuangzi

In previous posts about Japanese cuisine and sake-making I have talked about the obsession with ultimate quality in cooking (and in cutting, which is very important in Asian cuisine as the diners themselves do not have a knife!), as well as of sake brewing as a handicraft that in the end is practiced on a spiritual level... 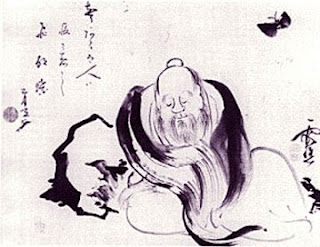 Reading the Zhuangzi again, the great Chinese Daoist wisdom book from around 300 BCE, I found this passage that expresses this perfect spiritual art in very clear terms (I cite from the old translation by James Legge, which is open source):


His cook was cutting up an ox for the ruler Wen Hui. Whenever he applied his hand, leaned forward with his shoulder, planted his foot, and employed the pressure of his knee, in the audible ripping off of the skin, and slicing operation of the knife, the sounds were all in regular cadence. Movements and sounds proceeded as in the dance of 'the Mulberry Forest' and the blended notes of the King Shou.'

The ruler said, 'Ah! Admirable! That your art should have become so perfect!' (Having finished his operation), the cook laid down his knife, and replied to the remark, 'What your servant loves is the method of the Dao, something in advance of any art. When I first began to cut up an ox, I saw nothing but the (entire) carcase. After three years I ceased to see it as a whole. Now I deal with it in a spirit-like manner, and do not look at it with my eyes. The use of my senses is discarded, and my spirit acts as it wills. Observing the natural lines, (my knife) slips through the great crevices and slides through the great cavities, taking advantage of the facilities thus presented. My art avoids the membranous ligatures, and much more the great bones.

A good cook changes his knife every year; (it may have been injured) in cutting - an ordinary cook changes his every month - (it may have been) broken. Now my knife has been in use for nineteen years; it has cut up several thousand oxen, and yet its edge is as sharp as if it had newly come from the whetstone. There are the interstices of the joints, and the edge of the knife has no (appreciable) thickness; when that which is so thin enters where the interstice is, how easily it moves along! The blade has more than room enough.

Nevertheless, whenever I come to a complicated joint, and see that there will be some difficulty, I proceed anxiously and with caution, not allowing my eyes to wander from the place, and moving my hand slowly. Then by a very slight movement of the knife, the part is quickly separated, and drops like (a clod of) earth to the ground. Then standing up with the knife in my hand, I look all round, and in a leisurely manner, with an air of satisfaction, wipe it clean, and put it in its sheath.'

The ruler Wen Hui said, 'Excellent! I have heard the words of my cook, and learned from them the nourishment of (our) life.'


In other words: we are not talking about a mere technique here, a procedure that may be mastered, but about something that goes way beyond this. We might call it a "Dao," a "Way" or an "Art." Any activity, whether butchering a carcass, making sushi, or brewing the perfect sake, becomes a Dao when it is performed in a spiritual state of heightened awareness. (See Zhuangzi in the Internet Encyclopedia of Philosophy).
Posted by Ad Blankestijn

I was pleasantly surprised to find an article entitled "Japan auto sales plunge as young lose interest." It is about the phenomenon of “kuruma-banare,” or “demotorization“ among young people, who regard owning a car as more trouble than it’s worth. 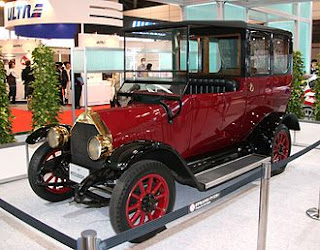 [Mitsubishi 100 years ago]
I could not agree more, as Japan certainly is the country least suited to cars in the world. I owned a car once too, way back in Tokyo, but used it only infrequently and after a couple of years got rid of it. I have never looked back. Japan’s streets are clogged but trains are efficient and clean. There is no space to park, not near your house and not when you go somewhere - unless you pay through the nose. Car prices are not very high, seen internationally, but gasoline, taxes, insurance, mandatory shaken tests etc. are quite expensive. Driving on Japan's narrow roads is an extremely unpleasant experience. Now I live in central Kobe, and I can get to most places on foot, or else I take the train.

The image of the car has also changed. It is just a thing that you use if you need it, but not anymore a status symbol. Many young people prefer to spend their money on a smartphone or other communication tools or services.

So it is not surprising that the carmakers in Japan are getting nervous. The population is already declining, due to "demotorization" sales will go down even more - we are already back at the level of 1980. I don' mind, as I feel there are still too many cars in this country... Perhaps Honda and Toyota can start making household robots instead of cars?

P.S. Self-driving cars will make the problem more serious. In the future, nobody has to own a car but you can just call a self-driving car whenever you need one.
Posted by Ad Blankestijn