in dire distress,
our reputation tossed about
like channel buoys at Naniwa Bay
even if it costs my life
I must see you again 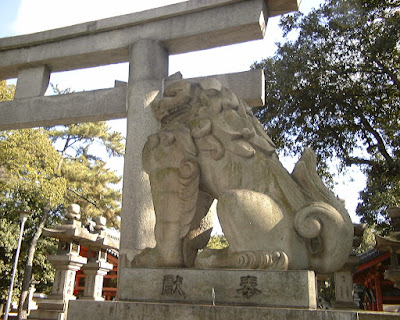 The poet, Prince Motoyoshi (Motoyoshi Shinno) was the eldest son of Emperor Yozei (poem 13). In the Tales of Yamato (Yamato Monogatari, mid-tenth c.) he appears as a suave and famous lover. In the Gosenshu (951) and other anthologies he has twenty poems. The present poem has an interesting head-note in the Gosenshu: "Sent to the Kyogoku Lady of the Wardrobe after their affair had come out." The lady in question was Fujiwara no Hoshi, daughter of Tokihira, and concubine in the service of Emperor Uda whom she bore three sons. But she also had an affair with Motoyoshi which became public knowledge. To have a relation with one of the wives of the Emperor was a form of sacrilege - as is shown in the Genji, where Genji makes the Emperor's wife Fujitsubo (who was also his stepmother) pregnant with a son, such relations could well break up the "unbroken line" of Imperial succession! Piquantly, one of the wives of Motoyoshi was a daughter of Emperor Uda, demonstrating how near-incestuous relations among Heian aristocrats often were when seen from a modern point of view - again, exactly as is described in the Genji. It was a small world, indeed.


This poem works with a pivot word (kakekotoba): mi o tsukushite mo means "even if it consumes my body," but also refers to a kind of channel-marker indicating the waterway for boats (miwotsukushi). And as the name "Naniwa" indicates, we are again at sea in Osaka.

An important question is what "ima hata (= the modern mata) onaji," "now the same," refers to. One interpretation is that it refers to mi wo tsukushite mo: the poet doesn't mind whether he lives or dies, so great is his distress. A second interpretation links it to "na" in "Naniwa" (which then also has to be a pivot word): "na" is "name" in the sense of "reputation." The whole poem then should be understood as the lady worrying about further damage to her (or both their) reputation, and therefore reluctant to meet her lover again. This last interpretation is the most convincing according to Mostow as it fits in with the anecdotes about Motoyoshi and the Fujitsubo story in the Genji, and also accords with the pictures and illustrations in later ages based on this poem.

3. Franz Schreker, Die Gezeichneten (The Branded, 1918)
With its potent mix of love, violence and deformity, and a lush score, Die Gezeichneten is a typical opera from fin-de-siècle Vienna. Its composer, Franz Schreker (1878-1934), was a genius opera composer and libretto writer and it was in that last capacity that his fellow composer, Alexander Zemlinsky, asked him to write an opera libretto on the theme of "the tragedy of the ugly man."

Zemlinsky had a special reason to ask for this material, for he carried a love trauma with him: in 1900, Zemlinsky had fallen passionately in love with Alma Schindler, one of his composition students, who initially reciprocated his feelings, but then suddenly broke off the relationship to marry famous composer and conductor Gustav Mahler, within only two months of making his acquaintance. Zemlinsky's unappealing physical appearance and lack of success both seemed to play a role here, so he suffered a double psychological hurt. Rather tactless, Alma Mahler had called him a "hideous dwarf, chinless and toothless and always smelling of the coffee house." This humiliation festered on and led to the request for a libretto on the theme of masculine ugliness versus feminine beauty.

Schreker duly set to work, even though the request seemed a bit strange, but he became increasingly interested in tackling the musical setting for this weird story himself. Zemlinsky proved sympathetic to Schreker's wish (he would later write a new libretto himself called The Dwarf - see my next opera post) and renounced the project. And so Franz Schreker came to write Die Gezeichneten, an opulent work in which he contrasted outer deformity with inner beauty. 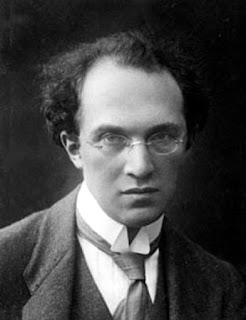 The title contains an ambiguity in German: "zeichnen" means "to draw" but also "to mark out," so "Die Gezeichneten" refers both to those who model for artists and those who are marked out, or branded, by fate.

The story is set in 16th c. Genoa. The hunchbacked, crippled aristocrat Alviano Salvago (the man branded by fate) craves beauty as a compensation for his physical defects. On a small island near the coast he has created a park-like paradise of his imagination, a sort of Elysium (it reminded me of the story by Edogawa Ranpo called "The Strange Tale of Panorama Island"). But he doesn't set foot there himself, afraid to profane it with his ugliness. He wants to donate this island to the citizens of Genoa, but his aristocratic friends try to dissuade him. Unknown to Salvago, they secretly use an underground grotto on the island for orgies with young women abducted from prominent Genoan families, whom they abuse and even murder. Their leader, Count Vitellozzo Tamare, has let his eye fall on Carlotta Nardi, the beautiful daughter of the mayor, who is an accomplished painter; she also suffers from a weak heart and fears that excitement will kill her (making her another person branded by fate). Carlotta rejects Tamare, and instead approaches Salvago. She is fascinated by the ugly cripple and wants to "draw his soul," giving rise to confused feelings on his side, especially when she faints in his arms when her weak heart plays up. But after she has painted Salvago, she looses interest in him, even though she has promised to marry him...

In the last act Salvago has finally opened his island paradise to the citizens of Genoa, who are all visiting, awed by the beautiful things they see. Carlotta evades Salvago and wanders off alone on the island, right into the arms of the masked playboy Tamare, who entices her to the secret grotto. Salvago desperately seeks her, and finally discovers the underground cave, followed by the other visitors to the island. There he finds Carlotta, lying senseless on a bed (the excitement caused by Tamare's lovemaking has broken her weak heart), while Tamare boasts of his conquering abilities. Salvago stabs him to death. Carlotta awakens, Salvago rushes full of hope to her side, but with her dying breath she calls out Tamare's name. Salvago descends into insanity as the curtain falls.

This opera, written during WWI, has been called symbolic for a disintegrating society and the disorientation of modern man - something we perhaps are seeing again today. Die Gezeichneten is an extraordinary work, with extremely unsettling music that rarely lets one sense a genuine resolution of the constant dissonances.

It seems that the libretto also contains various cunning portraits of fin-de-siècle personalities - a painting incorporated in the libretto for example resembles one of Arnold Schoenberg's pictures (Schoenberg was also active as a painter).

Franz Schreker, who looked a little like Gustav Mahler, was one of the few young composers of his generation who refused to be overwhelmed by Richard Wagner. His first success had been “Der Ferne Klang” (“The Distant Sound,” 1912), an opera set in the present-day about an ambitious young composer who in his search for the highest art neglects the woman who loves him, so that she descends into the dregs of society, not unlike Lulu later in Berg's opera. Unfortunately, Schreker had also been born at the wrong time, living exactly at the fracture of two periods: in his youth, Mahler ruled supreme, when he turned forty Mahler had been replaced by Schoenberg and Stravinsky. Although in the 1920s Schreker's operas were staged in all major Austrian and German theaters, by the time of his death he was almost forgotten. One additional reason was that his music was forbidden by the Nazis, as Schreker was partly Jewish - one of the many careers broken by the hate politics of 20th c. Europe. But his lush and decadent music had also gone out of fashion - in the 1920s, a new trend for neo-classical and more businesslike music broke through, as well as for jazz elements in classical music. Schreker was almost forgotten and for many years only the orchestral preludes to his operas could sometimes be heard. Happily, today a full revival is underway, bringing Schreker's operas again successfully to the stage after a hiatus of many decades.

Recording watched and listened to: Kent Nagano (conductor) and Nikolaus Lehnhoff (production) with Deutches Symphonie-Orchester Berlin and Konzertvereinigung Wiener Staatsopernchor, and Anne Schwanewilms (Carlotta), Robert Brubaker (Salvago), Wolfgang Schone (Lodovico), Michael Volle (Graf Tamare) and Robert Hale (Herzog Adorno) on Euroarts (DVD). In the first two acts, the singers crawl over the surface of a gigantic broken statue, lying amid Salzburg's Felsenreitschule stage. In Act III, in the island scenes, Lehnhoff shows us an orgy as from Kubrick's “Eyes Wide Shut.” This production is done in high style and vividly brings Schreker's world to life. To emphasize Salvago's difference from others, in this production he first wears women's clothes; when he has won the heart of Carlotta, he starts dressing as a man, but then she has no interest in him anymore.