Sushi and Beyond by Micheal Booth

Sushi and Beyond: What the Japanese Know About Cooking by travel writer and journalist Michael Booth is a funny and easily digestible book. Booth's interest in Japanese food starts when a Japanese friend after an argument about the quality of Japanese cuisine, hands him the classic Japanese Cooking: A Simple Art by Tsuji Shizuo. Booth becomes hooked on Japanese food and to take the culinary pulse of the island nation, decides to travel to Japan. Taking his wife and two young sons with him, for several months he eats his way through the length of the country, staying in Tokyo, Sapporo, Kyoto, Osaka, Fukuoka and Okinawa. 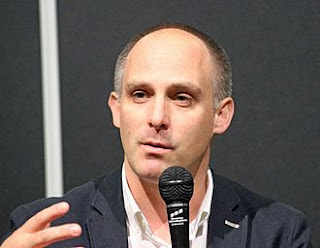 The resulting book is above all funny. Booth writes a racy and humorous style and I was reminded of Dave Barry Does Japan. This also has a negative side for it unfortunately means that the rather hackneyed "Westerner meets exotic Japan" newbie theme gets a lot of space. We have the obligatory sumo stable and chanko nabe, weird crawling things in Tsukiji market, a seafood lunch with female abalone hunters, drinking coffee in a dog cafe, feeding cows beer and of course viewing the giant tapeworm in the Meguro Parasitological Museum. And not only that, we also get treated to Japan as the height of freakishness: eating snake stew in Okinawa, enjoying cod sperm, whale ice cream and other unspeakable things the Japanese ingest almost daily (do they?).

But is it a good book about Japanese cuisine?

I am afraid not. Booth is new to Japan, so he remains stuck in the old exoticism rut. He has prepared himself admirably about Japanese food by reading the above mentioned book by Tsuji Shizuo and a couple of others, but he is no specialist in Japanese culture and makes some major errors there (for example what he says about Shinto). And above all, he does not speak or read Japanese so has to rely on the kindness of others or on the English abilities of his informants, which in this domestic sector are not large.

This shuts him effectively out - he is treated as an honored guest, and that is what he remains throughout the book, a visitor dipping into chanko-nabe and ramen, tako-yaki and yudofu, and enjoying the heights of kaiseki. There are visits too, to a kelp processing plant, a farm growing wasabi, a cattle farm, a miso factory. There are also a sort of interviews, with such food luminaries as Mr Hattori and Mr Tsuji, heads of the largest competing culinary academies, one in Tokyo, the other in Osaka. That these important persons go out of their way to entertain Booth shows he had some good introductions. He pays them back by writing episodes about them that read like PR brochures. Because he is not able to speak Japanese, he only gets standard answers and the standard polite treatment for foreigners.

I was hoping for some deeper insights into Japanese food, but there are no new ideas here, it is all superficial reportage, a series of humorous accounts of the different meals Booth enjoys.

That I still enjoyed this book has one reason: Booth writes very well and is funny and sympathetic. But don't expect anything new or insightful when you are past the newbie stage yourself. And for food, first read Tsuji Shizuo's Japanese Cooking: A Simple Art or that other good introduction, Lonely Planet World Food: Japan (Lonely Planet World Food Guides).
Posted by Ad Blankestijn

Can you wear shorts in a temple or shrine in Japan? What about a short-sleeved T-shirt? Funny socks? Are there any other rules?

Most Japanese have a relaxed attitude towards religion, so there are not many strict rules.

Here are a few pointers to Japanese temple manners:

Don't be noisy and keep a respectful attitude - as you would in a museum. But you don't have to start whispering! Not all Japanese keep to this rule, though, you will see Japanese tourists who can be quite boisterous, not to speak of all the chattering school tours filing through major temples.

You usually have to take off your shoes when entering a temple hall and either leave them outside or carry them with you in a plastic bag. This is not for religious reasons, but for the very practical reason that temples have wooden floors and these would be damaged by all those tourists tramping through on heavy boots... The same rules exists in other wooden buildings, as Nijo Castle.

No other clothing rules - shorts and short skirts are OK. So are T-shirts etc. No color rules either, also your socks can have all the colors of the rainbow (and bare feet are in order as well)! You also can wear a cap or hat, but it is polite to take it off when paying your respects inside the main temple hall.

No photography inside temple halls - this rule is always clearly indicated on signs and very strictly reinforced (for example, in Sanjusangendo in Kyoto). I think it is more about image rights than about religion, though... Outside, in the gardens etc usually photography is O.K. although tripods are normally forbidden (for the same "image rights" reason a few famous gardens as Samboin in Daigoji, Kyoto, forbid all photography). It is polite not to aggressively take pictures of people praying, etc., but again, in Japan you won't find an angry mob against you if you transgress. P.S. A temple where you can take photos inside, even of the Buddhist images, is Todaiji in Nara. 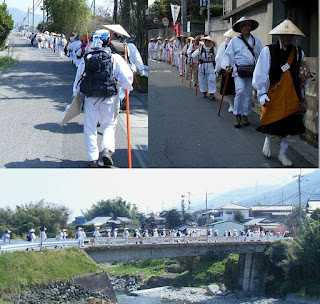 [Japanese pilgrims on Shikoku]
Taking part in religious rituals at temples or shrines or not is totally up to you! You can just go and visit as you would any place of cultural significance, or if you prefer you can take part in small rituals as: ritually washing hands at the basin at the entrance to a shrine, clapping hands and bowing at the main hall of a shrine, lighting candles and/or incense in a temple. and saying a silent prayer in both. You don't have to be a Buddhist or Shintoist in order to take part in this, in Japan religion is more about daily practice and ritual than about belief. And, if you don't want to take part, that is perfectly O.K. as well!

A visit to a temple or shrine in Japan can be a very relaxing experience!
Posted by Ad Blankestijn