The Gion Festival held in Kyoto from July 1 to July 29 originates in a ceremony organized in the 9th c. in the Shinsenen Pond, then part of the Imperial Palace. Halberds were carried here and dipped in the water as supplication to the gods to end an infectious disease. The festival was annually repeated and grew in size - in due time the citizens of Kyoto took it over from the court. The famous floats first appeared in the Middle Ages, to please the gods with music, dance and spectacle. The lead float, Naginata Boko, still carries a halberd on the roof as reference to the origin of the festival. It is also the only one that still has a child (Chigo) as representation of the god. There are 32 hoko (carts) and yama (floats) built and maintained for centuries by local associations of merchants in central Kyoto. They are decorated with fabulous carvings and ancient Gobelin tapestries and other drapery. All floats tell a story from Chinese legend or Japanese myth. 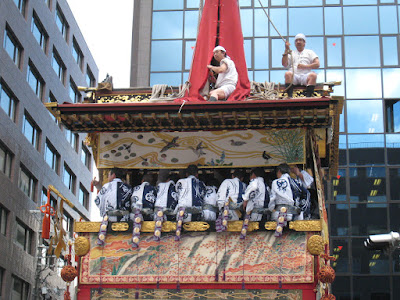 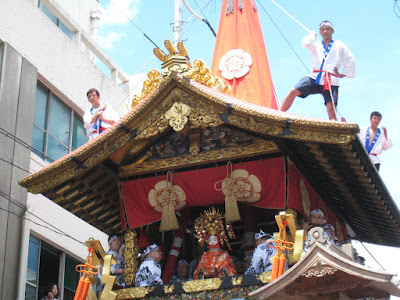 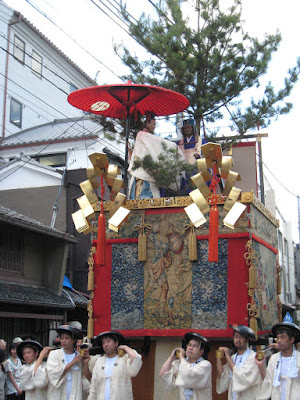 Thanks to the Yin and Yang calculations brought from China, Shinto has adopted a system of yakudoshi, or inauspicious years. In the past, mysterious calculations were necessary, but now the priests have decided that all women have their most inauspicious year when they are 33 years of age, and men when they are 42. People of these ages visit their shrine for a ceremony or at least buy a protective amulet (omamori).

Below is a photo of a sign in the Fujinomori Shrine asking attention for the bad years. These are counted as kazuedoshi, that is in the old system where you were already one year old at birth (meaning you have to subtract one year from all these figures - 33 is in fact 32, and 42 is 41, etc.). As people are not used to this system anymore, the years of birth are written behind them. 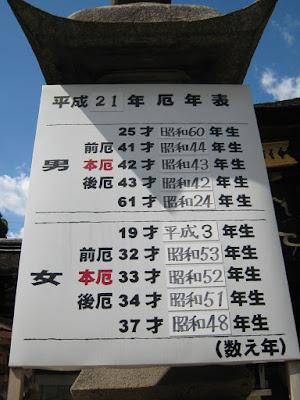 The inauspicious years are in red; also the year before and after that age is "bad." In addition, for men 25 and 61 are weak years, and for women 19 and 37.

It is all totally unscientific, and I don't know how many people still fall for it. Sometimes Japanese just like to take part for the fun of it without asking themselves such difficult questions. My Japanese family strongly disliked it. But when a religious institution finds a way of making money from the gullible, it will cling to it for ever!
Posted by Ad Blankestijn

Summer cleansing of the spirit

Nagoshi no Harae refers to the "great purification" (oharae) that used to be performed on the last day of the sixth month of the lunar calendar. This goes back to a custom at the imperial court, but it in later ages it became especially popular among Kyoto's townspeople. 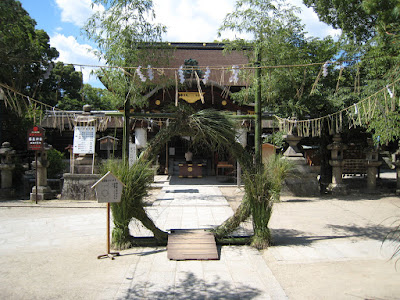 [Chinowa in the Fujinomori Shrine, Kyoto]

For this rite, large rings made of miscanthus reed (chinowa) are set up in the grounds of shrines. By passing through the reed gate (the summer ring) worshipers are purified and get rid of any defilement (kegare). Thus they are protected from misfortune. The custom also existed of passing the defilement on to a paper or straw puppet and throwing this away in a river or the sea.

The rite was originally also held at the end of December, but that one has been given up long ago, perhaps because there are already other purification ceremonies at the New Year. In contrast, the Nagoshi no Harae that is held in summer has become bigger and nowadays most shrines put up the chinowa for the whole month of June.
Posted by Ad Blankestijn

The Fujinomori Shrine in the Fushimi Ward of Kyoto is associated with horses and horse racing - its main festival on May 5 features kake-uma (showing military arts on horseback). The deities are militant gods and therefore Fujinomori was in the past popular with warriors. 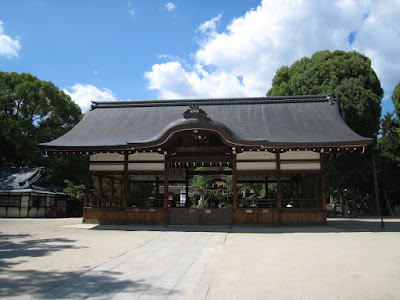 The shrine rather naively claims a history of 1,800 years, all the way back to Empress Jingu who is one of its present deities. Empress Jingu was a rather belligerent female, who led a naval expedition to attack Korea, but unfortunately for the shrine, she never existed. Her story is all pure myth, as are the banners and weapons she is supposed to have buried here after her victorious return from the continent.

Historical evidence shows rather that the Fujinomori Shrine was established in the 15th c. by the merger of a few local shrines in this area. About those original shrines, nothing is known, but if they had been famous, they would have figured in the 10th century Engishiki list of important shrines. So it is safe to assume this shrine was born from medieval warrior society, and that fits its character. 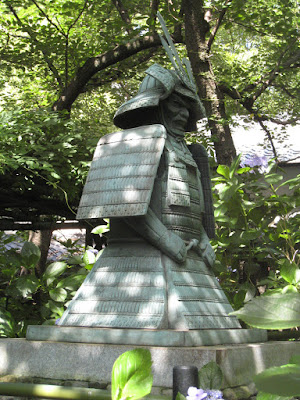 The grounds are spacious, but there are no historical buildings except the Main Hall which dates from 1712 and was apparently moved here from the Palace. The shrine is known for its hydrangeas, which flower in June in two gardens attached to the shrine.

Hydrangea in the Fujinomori Shrine, Kyoto

In June, ajisai (hydrangeas) pop up everywhere in Japan: standing defiant along the roadside, peeping out of small private gardens, clustering in temple courtyards and parks. 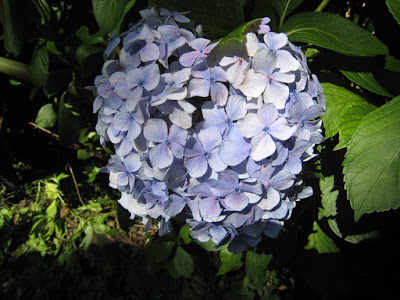 [Hydrangeas like splashes of purple on the green leaves]

This year, at the end of June, I went to the Fujinomori Shrine in the Fushimi ward in Kyoto, a lesser-known spot as ajisai watching goes. But there was nothing wrong with it. Although the shrine stands in a busy residential district, Fukakusa, the grounds are extensive. There are two hydrangea gardens, one to the left of the approach to the shrine, the other at the back. 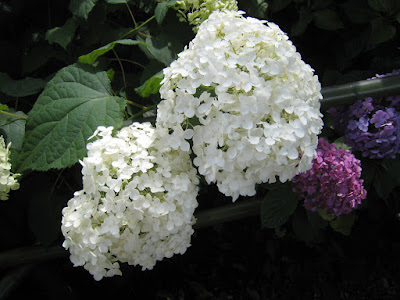 Narrow paths lead through these gardens and the flowers are so high that you can't see other viewers, let alone be disturbed by the houses and parking lots around the shrine. 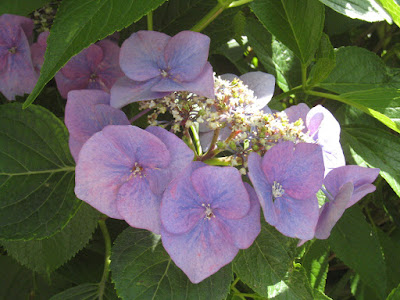 The hydrangea gardens are open in June and July; in the middle of June there is also the Hydrangea Festival, but I avoided this for fear of crowds. It would only have meant some additional koto (Japanese zither) music, anyway. There were still enough beautiful hydrangea to make the visit a rewarding experience.