A few days ago I happened to pick up Yoshida Shuichi's Akunin in the English translation by Philip Gabriel, Villain. I had ignored the book previously, as I thought it was another of those Japanese thrillers that for some obscure reason nowadays are being translated in such large numbers. Think Higashino Keigo (Naoko) or Miyabe Miyuki (Crossfire) with their silly New Age supernatural elements, cardboard characters and improbable plots. 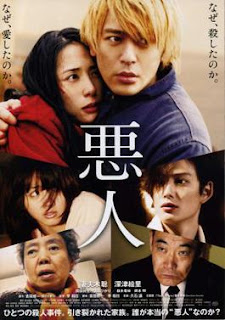 [Poster for the film by Lee Sang-il]

But this was different: Villain is not a thriller, nor a police procedural or a who-done-it (it is never a secret who the murderer is), but a novel about a crime and its effects on the perpetrator and the people around him and as well as those around the victim. The author, Yoshida Shuichi, is not a crime writer either, but a literary author who has written several "crossover" works. He was born in 1968 in Nagasaki, and studied business administration in Tokyo. In 1997 he published his first novel, Saigo no musuko (The Last Son) and in 2002 he obtained the 127th Akutagawa Prize for the novella Park Life. In the same year he received the Yamamoto Shugoro Prize for the novel Parade. That he won both a prize in pure literature and in popular literature in the same year, shows how he straddles the fence between both fields - or perhaps it proves that in our post-postmodern times there are no fences anymore. Villain (2007) received both the Mainichi Publishing Culture Award and the Osaragi Jiro prize and sold more than 2.1 million copies.

Villain is a psychological examination of the lives of a construction worker (Yuichi), the girlfriend he murders (Yoshino, an insurance saleswoman), and the new girlfriend he falls in love with (Mitsuyo, a saleswoman in a jumbo men's clothes store). At first, we see Yuichi as a beast and the first girlfriend, Yoshino, as an innocent victim, but gradually, when we learn more about them, Yoshino is revealed to be loose and shallow, while Yuichi may be hard to fathom, but he takes good care of the grandparents with whom he lives.

Yuichi meets his girlfriends via dating sites. Yoshino uses such dating sites not so much to meet boyfriends, but to make money as she prostitutes herself for a fee (plus travel expenses!) to the men she meets. After the murder, Yuichi meets Michiyo who is getting older and sees her boring life slip by in the provincial town where she lives. They fall desperately in love, but as Yuichi is a wanted murderer, they both realize they have no future.

Villain is a dark novel that paints an ugly picture of contemporary Japan, where loneliness and alienation seem the hallmarks of the nation's youth. The novel concentrates on ordinary, recognizable people, those below the level of the salarymen, and provides a realistic view of their daily lives: the prices of highway tolls and gasoline, what to have for dinner, the struggle for customers by a barber whose style is too old-fashioned, the dates in love hotels and the ubiquity of convenience stores. Even more interesting are the typical Japanese circumstances, such as the public reaction to Yoshino's murder - instead of receiving sympathy, the parents are flooded with obnoxious phone calls and messages telling them their daughter deserved to die because of her sleazy character.

The end of the book is uplifting. Communication is restored between the parents of Yoshino, Yuichi's grandmother who was being extorted out of her savings by gangsters, decides to stand up to them, and even Michiyo's life is transformed. But the greatest change is seen in Yuichi, who redeems himself by an act of altruism, that is all the greater as he hides it from the receiver.

The title should be read with a question mark: is Yuichi really such a villain, or are it rather social and other circumstances that make him so? The author holds no apology for Yuichi, but does ask us to have a more nuanced view.

The style of the book is matter-of-fact, and never descends into melodrama. There are also some chapters in interior monologue, which directly shows us the thoughts of the major characters. The translation is excellent, as we are used to from Philip Gabriel who has an impressive list of translations to his name, including novels by Oe Kenzaburo and Murakami Haruki.

In short, this is a realistic novel, about recognizable people, written in a clear style. Above all, it is an interesting picture of Japanese society, although a bit on the negative side.

P.S. A blurb on the back cover of the translation contains a misleading comparison to Stieg Larsson - happily, this realistic novel has nothing whatsoever in common with the sensational fables of Larsson which are more rooted in the 19th century (The Count of Monte Cristo) than contemporary reality.
Posted by Ad Blankestijn