Nagai Kafu: A Strange Tale from East of the River (Bokuto Kidan, 1937)

Nagai Kafu is the greatest flâneur among all Japanese authors - he explored on foot all downtown neighborhoods of Tokyo, something which not only found its reflection in essayistic works like Hiyori Geta ('Fair-weather Geta,' 1915), but also in the stories he wrote. Never has the geography of Tokyo been described in such detail, be it the boards of the River Sumida in 1910 in the eponymous story, or the district east of the Sumida in the late 1930s in A Strange Tale from East of the River. 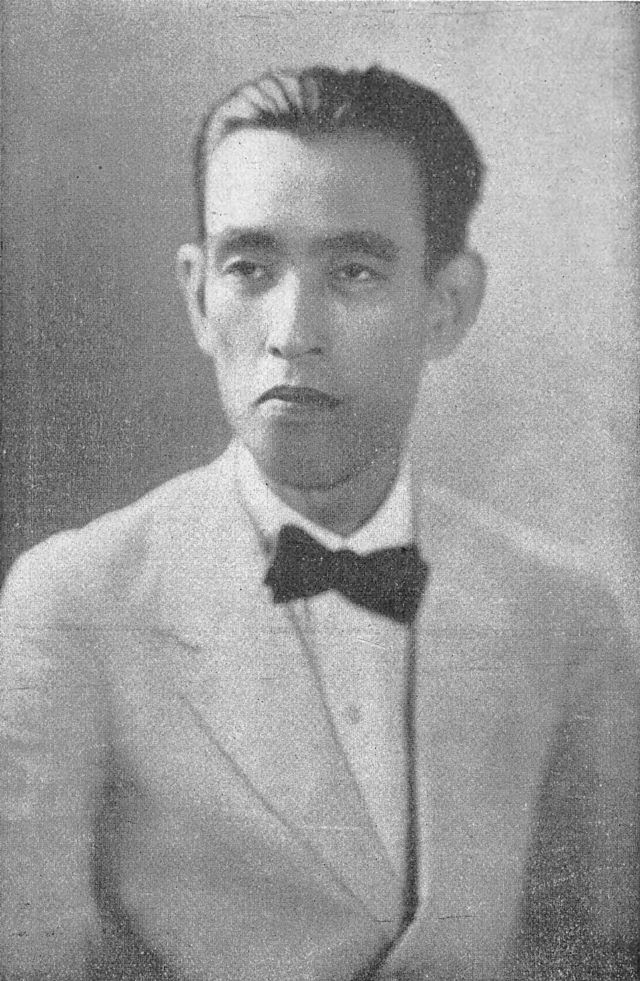 (Nagai Kafu in 1927 - Photo Wikipedia)
Kafu's descriptions of Tokyo are so reliable that Edward Seidensticker used his writings as important sources for his two books about the modern history of the metropolis: High City, Low City and Tokyo Rising.

This is what I love in Kafu's work - life in Tokyo is evoked so lively and naturally, that for a while we as readers also become 'Tokyoites.'

But Kafu is not only a great wanderer or evoker of atmosphere, he is in the first place a great writer. In this respect, Kafu has often been misunderstood - even by his translator, Edward Seidensticker, who deprecatingly called him a 'scribbler,' blinded by a restricted and too traditional view of what a novel should be. In fact, Kafu was one of the best Japanese authors of the 20th century, also someone who was fully aware of major trends in Western literature, which he read in the original French or English.

The literary interest of  A Strange Tale from East of the River - in my view his best work - lies in the original mode of narration -  the setting is that of an author who is writing a novel for which he is collecting materials. Like Kafu, he enjoys wandering through Tokyo, and that is why he visits the Tamanoi, a raw, low-life prostitution area east of the river Sumida. Kafu gives parts of the novel the narrator of his story is writing, interspersed with the adventure of the narrator, and several general observations, poems, etc. (The haiku in the story are a reminder that Kafu was also a good haiku poet!). This is true metafiction. As William Tyler says in Modanizumu, Modernist Fiction from Japan (1913-1938), Kafu fuses elements of classical lyricism, the 'novel within the novel' of Edo-prose, and the modernistic 'novel as commentary on the novel.'

A Strange Tale from East of the River is not only a well-crafted novella, it also has an unforgettable atmosphere: the long walk of the narrator through Asakusa where he visits a second-hand bookshop, the interrogation at a police post (these were the years leading into the war, and the authorities were not easy on the population), the view of Tamanoi with its dilapidated houses seen from the railway dyke, then the sudden rain and the meeting with the prostitute Oyuki who deftly entices him to her room by borrowing his umbrella.

That summer, he keeps visiting her mosquito infested room in the evening for long talks (and something else, which he whispers into her ear without revealing it to the reader), never disclosing his true identity as a writer - and she also keeps silent about her background and past. She appeals to the narrator because she wears a kimono and old-fashioned hairdo, reminding him of a woman of the Meiji-period. But when autumn starts, he decides it has been enough and stops his visits.

The summer evenings spent with Oyuki have become an unforgettable experience for the narrator, and Oyuki has unwittingly served as his muse.

The Tamanoi, which has now of course disappeared (the area today is called Higashi-Mukojima), was a rather rough red-light district, mostly visited by laborers - the unlicensed prostitutes rented small rooms and sat at the window and called out to the men passing by through the narrow alleys. Passersby were lured into the alleys by signs claiming this was a 'shortcut.' The details in the novella are all historically and geographically accurate.

The Tamanoi was decidedly unglamorous, as is Higashi-Mukojima today. The oldest trade in the world has left, and now the area consists of small shops, small houses and huge concrete apartments. It is a bit boring and looks the same as other areas east of the river. Even the somewhat notorious name 'Tamanoi' has been erased: the Tobu line station of that designation has been renamed 'Higashi-Mukojima.' Only where small private homes still remain can the visitor get a whiff of the atmosphere of old Tokyo thanks to the many potted plants in front of the houses. And of course we have the small Shirahige Shrine, mentioned in the story, and Mukojima Hyakkaen, the Garden of a Hundred Flowers, a garden dating from the Edo-period... and that all in the shadow of the futuristic Tokyo Skytree.

Original: Available online as etext from Aozora Bunko; or ｆrom Iwanami Bunko.
Translation: Kafu the Scribbler: The Life and Writings of Nagai Kafu 1879-1959, by Edward Seisensticker (Stanford U.P., 1965). Reprint of the story by Tuttle Books. Both seem to be out of print now, which is a shame - high time to reprint these great stories!
Posted by Ad Blankestijn

Vladimir Nabokov's The Eye (Soglyadatay, 1930) is a wonderful, modernist experiment, in which the first-person narrator commits suicide at the beginning of the book, but all the same continues telling his story.

That story is set in Berlin, the informal capital of Russian émigrés, where Nabokov lived from 1922 to 1937. His father had set up the émigré newspaper Rul', in which Nabokov - writing under the pseudonym V. Sirin - also published his first poems and novels. The father was assassinated in 1922 by a Russian monarchist, but Nabokov continued living in the city, earning a small income as a private tutor of languages and tennis.

The Eye is one of Nabokov's two published novellas (the other one is Transparent Things from 1972) and was his fourth book, written in Russian. The English translation was made in 1965 by Nabokov's son, Dmitri.

When I looked at reader's comments on the internet, I was struck by the large number of people claiming not to understand this novella. Indeed, there are two hurdles, an easy one and a harder one. To solve them, it is important to note that throughout his career, Nabokov invented many tricks such as literary puzzles, plot intricacies and unreliable narrators to manipulate the reader, but that he also always adhered to the rule of fair play - the reader is given sufficient clues to work out what is going on.

The easy hurdle is of course that the (unnamed) narrator commits suicide early on in the story. He has been beaten and humiliated in front of his two pupils (who keep staring at the scene with big eyes) by the jealous husband of a woman he was bedding. Out of shame he later shoots himself in his room. But Nabokov gives plenty of hints that the suicide is unsuccessful (although at the same time preserving a decided ambiguity): the narrator feels uncomfortable with the pistol pushing against his chest, so he moves it away before pulling the trigger; and he wakes up in a hospital. Still, after the shot has gone off, he believes himself to be dead and now a ghost walking the earth. I would call this a psychological condition rather than reality, for even in Nabokov ghosts don't exist. Anyway, he continues to go about his daily activities as if he had never died.

The second hurdle is that after the suicide, the originally first-person story switches to an objective third-person account of a man called Smurov, who regularly visits a Russian émigré family living in an apartment one floor higher than his own flat. It is as if the narrator is observing one of his fellow boarders, investigating every aspect of his life. But in fact, the (unnamed) narrator and this Smurov are one and the same person. After the shock of his suicide, the "I" of the narrator has become an "eye," observing himself as it were objectively, from the outside. By setting himself up as a stranger, he offers himself a chance to escape his real identity and to project his being into a more satisfying, even heroic, self.

We then get an ironical story about the Russian émigré milieu, a parody on the all-Russian theme of a neurotic and tortured character, who fails to make an impression on the (higher class) people with whom he associates, and who in the end brings about his own humiliation. It is good to realize that Nabokov strongly disapproved of this cult of suffering and self-negation, and that he hated Dostoyevsky's 'humiliated heroes.' Nabokov had a very low opinion of the sentimental Dostoevsky, so he makes fun of him in this brilliant parody.

This Smurov is an enigmatic young man, flatteringly introduced with the words 'everything he said was intelligent and appropriate,' but who also likes to brag about his imaginary exploits fighting the Communists during the Russian revolution - unconsciously revealing that he is a liar, for when he relates a heroic feat taking place at the Yalta railway station, another visitor coolly remarks that there is no railway station in Yalta. Of course, the bragging serves to attract the attention of a young woman, Varvara, nicknamed Vanya, with whom he is in love. He lovingly describes Vanya with the words 'she was so enchanting... her downy face, near-sighted eyes... her short bright dresses... her big knees and big hands with pink knuckles.' (Not coincidentally, she has a masculine nickname.)

On top of that, the lovesick Smurov is the only one who does not know that Vanya is in fact already engaged to another visitor, Mukhin.

In this comic-grotesque tale the narrator steals other people's correspondence to get their opinion about himself, and he also sneaks into Vanya's room to see if she has his picture on her desk - only to discover that his image has been carefully cut away from all pictures she keeps! Now ends Smurov's obsessive attempt at self-detachment and he passionately declares his love to Vanya - and is sent packing with his tail between his legs.

At the end of the story, the narrator again happens to meet the irate husband from the beginning - who now is the first to call him "Mr Smurov," thereby confirming the single identity of these two pseudo-doubles - and is offered an apology as other infidelities of the wife have come out. The narrator then closes with a desperate, strident protest of happiness. I suspect that the narrator/Smurov is again unreliable here, and that this flattering meeting with the husband is just a fantasy.

We could call Smurov a spy (the meaning of the Russian title) of what other people think about him. He tries to find his identity in the mirrors of other people's opinions, something which is of course impossible, for others may have completely wrong ideas about us. Identity is not something that can be spied out, but a reality that must exist in ourselves.