Kyo-yasai are vegetables cultivated in Kyoto since the Edo period or earlier. Most of these came originally from China or Korea (Japan has very few indigenous vegetables, mainly mioga (a sort of ginger) and seri (dropworth). The rest was introduced from the Asian mainland between the fifth and twelfth centuries and afterward “domesticated” in Japan. These vegetables are distinct from the “Western vegetables” as lettuce, broccoli etc., introduced since the late 19th century.

Kyo no dento yasai
A list of 41 vegetables established by Kyoto Prefecture in 1987 to “brand” traditional Kyoto vegetables and stimulate their production (which had decreased because of urbanization). Compared with other vegetables, kyo-yasai are a bit sweeter and have attractive colors and often interesting shapes.

Vegetables in the Kyoto cuisine
Kyoto is located in a mountain basin, so the cuisine was centered on vegetables rather than seafood (fresh seafood was not a all available, fish was eaten only in preserved form, salted or dried). Kyoto was also a center of Buddhism, which ideologically stimulated the development of a vegetarian cuisine. Water was abundant in the Kyoto basin, from the Kamo, Katsura and Takano rivers, and the earth was fertile thanks to the nutrients these same rivers carried along. Kyoto has a good climate for growing vegetables, with ample rain fall and generally mild temperatures - the cold winters help enhance the sweetness of vegetables and are ideal for growing field vegetables as leeks. As the national capital and home to an exquisite court culture, there also existed a strong stimulus to develop these vegetables into tasty and colorful varieties.

Place in Japanese cuisine
Japanese cuisine is historically divided into four types: Daikyo Ryori (banquet cuisine of the Heian nobility), Honzen Ryori (food of the samurai class), Shojin Ryori (vegetarian cuisine of Buddhist temples) and Kaiseiki Ryori (the meal taken during the tea ceremony). Except for the second one, all of these are intimately connected with Kyoto and the third one is wholly vegetarian (the last one nearly so). Kaiseiki Ryori has become the basis for modern Japanese cuisine as served in expensive ryotei, in Kyoto and elsewhere.

Pickles (tsukemono)
There are many varieties of Kyoto-style pickled vegetables, such as senmai-zuke (thin slices from the large, round Shogoin turnip), shiba-zuke (from Kamo eggplant) and suguki-zuke (from sugukina turnips).

Obanzai
The name for the simple but tasty vegetable dishes used in Kyoto home cooking – these are also often based on Kyoto vegetables bought in the local market.

Furiuri
The still existing habit of farmers from near Kyoto to sell that morning's harvest directly to customers in the city by making regular rounds of neighborhoods with carts or light trucks.

Japanese Customs: Names of the months

Every first-year student of Japanese knows the names of the months: ichi-gatsu, ni-gatsu, san-gatsu etc... it could not be simpler, just the counters from one to twelve plus "month." It is also a bit boring. Happily, there is a more poetic way of naming the months in Japan - but less easy to remember:

Of course, these poetic names are never used for dates, but only in poetry, such as haiku, or on old-fashioned calendars. But isn't it much more beautiful?
Posted by Ad Blankestijn

In the long and difficult address system of Kyoto you often find the terms "agaru" and "sagaru." "Agaru" of course means "to go up" and "sagaru" "to go down." This is symbolically measured from the old imperial palace which originally was situated in the northern-most part of Kyoto, as one explanation tells us. Or, less poetically, it refers to the geographical situation that the Kyoto basin gradually slopes upward - when you stand in northern Kyoto, you are on the same level as the top of the pagoda of Toji! So, in translation, "agaru" means "north of" and "sagaru" "south of."

What about east and west? Here we have the terms "Nishi-iru" and "Higashi-iru" which are self-explanatory ("iru" means "to turn into"). This form of addressing is of course at all possible because the old city of Kyoto was laid out like a go-board.

Sanjo Ohashi, the Great Third Street Bridge, is the bridge over the River Kamo in Kyoto that formed the last (or first, depending on your point of view) stage of the Tokaido, the Eastern Highway between Edo and Kyoto. Its precise origins are unknown. The historical first reference to this bridge dates from 1590, when Hideyoshi ordered for it to be repaired. 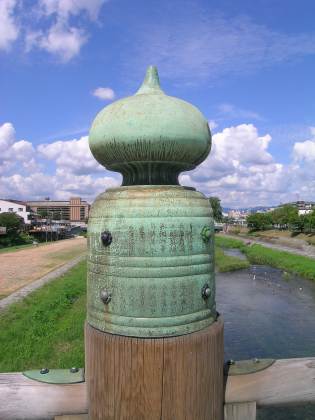 The present concrete bridge dates from 1950. Typical for the bridge are the giboshi, the onion-shaped posts. The bridge is 74 meters long.

On the east side is the Keihan station with bus center, on the west side are the geisha district of Pontocho and the bar town of Kiyamachi. The banks of the river, especially on the west side, or popular for strolling or enjoying the coolness of the river.
Posted by Ad Blankestijn

My favorite Japanese kitchen is Kaiseki, the haute cuisine that developed from - among others - the meal taken during the tea ceremony and that centers on vegetables and fish. In the Edo-period, Kaiseki changed into a sort of party food, eating during banquets where also a lot of sake was imbibed. Nowadays, Kaiseki and its brother, Kappo (where the chef is active in front of his guests, behind a wooden counter) are exclusive and expensive. And today sake plays a minor role at Kaiseki meals, as many chefs put so much emphasis on their own art that they just serve a bland sake that does not interfere with it (but neither enhances it). 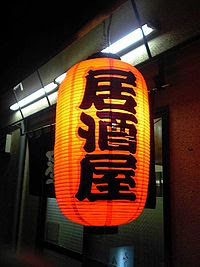 So bring on my second favorite, the izakaya, the Japanese bar-restaurant where you enjoy light foods with a variety of drinks, all in a relaxed and easy-going atmosphere. By the way, in California these are called "Japanese tapas," after the similar Spanish type of restaurant. Unfortunately, izakaya food has gotten a bad reputation due to the emphatic prevalence of cheap chain stores you always find around stations. In those places, not only the sake is usually cheap stuff (almost drowned in the volume of shochu cocktails these places serve the young crowd, like the "breezer" culture in Europe), also the food is oily and microwaved.

For the real izakaya experience you have to hunt for the individualistic places where the cook still cooks with fresh ingredients, standing behind the counter, and where usually the choice of sakes is excellent as well. Izakaya, the Japanese Pub Book introduces eight brilliant establishments from Tokyo, all with their own characteristics: passionate chefs, superb food and loyal customers.

Author Mark Robinson also includes 60 recipes for culinary do-it-yourselvers. Although I have to confess I am not one of them, the recipes and beautifully photographed dishes are mouth-watering fun. Robinson discusses cooking techniques and ingredients. He also helps first-timers by providing guidance on izakaya manners and language. The book is interspersed with smaller articles on such useful subjects as izakaya history and Japanese aromatics.

In short, this “gateway to Japan's friendliest dining experience” is a beguiling window on a cornerstone of Japanese food culture. It is also a very practical guide. A book to drool over... I am waiting impatiently until my favorite izakaya opens at five o'clock...

Kansai Files: Inventions from the Kansai

Surprisingly many things were invented in the Kansai - the area of 24 million people and the 10th GDP in the world - around Osaka, Kobe, Kyoto and Nara. As Osaka is the city of "eat till you drop down" (kuidaore), not surprisingly these inventions often have to do with food. Another characteristic is that they help make life easier and more pleasant.