Food manga are not always about gourmet food, even when they are called The Solitary Gourmet (Kodoku no Gurume). For there is not a shred of fancy food in all these stories. Instead, they introduce us to the daily dishes and common eateries of the ordinary Japanese, and that is all the more interesting. 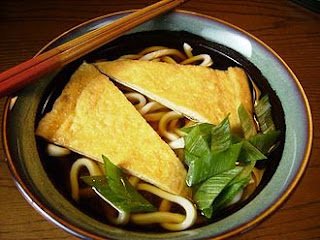 The setting is that of a middle-aged businessman, an importer who owns his own small company, always neatly dressed in suit and tie, going on foot about his business in Tokyo, Osaka and other cities. There must be millions of persons like him in Japan. When tramping around in downtown areas he gets hungry and then he picks the first restaurant that looks inviting enough to still his hunger. Entering a restaurant alone, especially in a strange neighborhood, is sometimes difficult, and as readers we share the self-consciousness of the Solitary Gourmand.

The name of this businessman is Inogashira Goro. We almost know nothing about him. There is not much of a story, either, we just get Inogashira's interior monologue while he sits in the restaurant, observing the other guests, the owner, and the type of food.

Inogashira likes to eat alone so that he can concentrate on his food - he dislikes business lunches. The food awakes all kinds of thoughts and memories in him.

What he eats are typical Japanese dishes as kaiten sushi (conveyor belt sushi), udon noodles, gyoza, takoyaki, and yakiniku (Korean barbecue). The manga renders the atmosphere of these small restaurants and their simple food so well, that you almost feel like slipping inside and taking a seat next to the Solitary Gourmand and, of course silently, enjoy the same kind of dish...

The manga was written by Kusumi Masayuki and drawn by Taniguchi Jiro. There is just one slim volume with 18 stories, but it became quite a "cult" manga in Japan and has also been translated, for example in French (Le Gourmet Solitaire).

The drawings are very detailed and magically transport us to downtown Tokyo and its small eateries.