Suntory's Yamazaki Distillery is the oldest whisky plant in Japan. It was set up in 1923 by Torii Shinjiro, the founder of Suntory which until then had been only manufacturing the extremely sweet Akadama port wine. While Akadama for obvious reasons never has won any hearts outside of Japan, Suntory's malt whisky has been another story - it has gathered many international prizes. 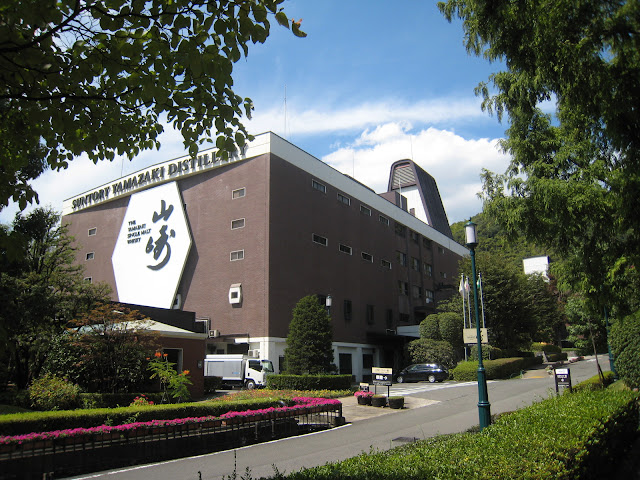 Mr Torii selected a great place for his distillery: a bamboo grove at the foot of Mt Tennozan, in green Yamazaki between Osaka and Kyoto. It is an area where three rivers, the Katsura, Uji and Kizu rivers, merge, creating mists and fog conducive to good whisky (it keeps the wooden casks used for aging wet so that they don't loose moisture). On top of that, it has excellent water that wells up from underground - so good and pure that famous Tea Master Sen Rikyu built his Taian teahouse in this area. And, last but not least, the location is also conveniently close to the large population centers of Kyoto, Osaka and Kobe.

Whisky is made by first germinating barley, a process which is called malting. The malt is dried in kilns with a little peat. Next, it is ground and put into a mashtun with warm water (the flavor and quality of the water is very important here!). The enzymes which are the result of the malting change the starch into sugar. When the saccharification is finished, the mash is filtered to obtain a clear wort. That is next transferred to wooden vats called washbacks for the fermentation process. Yeast is added to that purpose. The wooden washbacks are more difficult to operate (temperature control) than stainless steel vats, but they give the whisky a richer flavor. 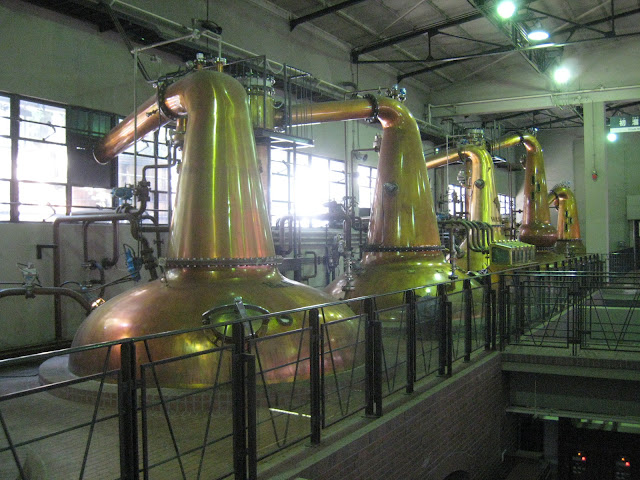 Next, direct-fired pot stills are used to distill the fermented liquid and obtain a higher alcohol percentage. Distillation is conducted twice. The right timing of this process by the stillman, the artisan in charge of distillation, is central to obtaining a well-balanced flavor.

The distillery operates many different stills ("straight-head stills, bulge stills and lantern-head stills"), crouching in a huge hall like so many primeval monsters, to get various types of whisky for blending. The top blended whisky by Suntory is Hibiki.

The final stage of whisky production is the all-important aging in oak casks. The oak imparts color and flavor to the whisky. Aging takes place in a large storehouse where a huge variety of oak casks has been lined up, with such interesting names as "hogsheads," "puncheons" and "sherry butts," besides normal barrels.

The Yamazaki Distillery also became the location where Japan's first single malt whisky was distilled, Yamazaki 12, which came to market in 1984. Today Suntory offers single malts of 10, 12, 18 and 25 years old. 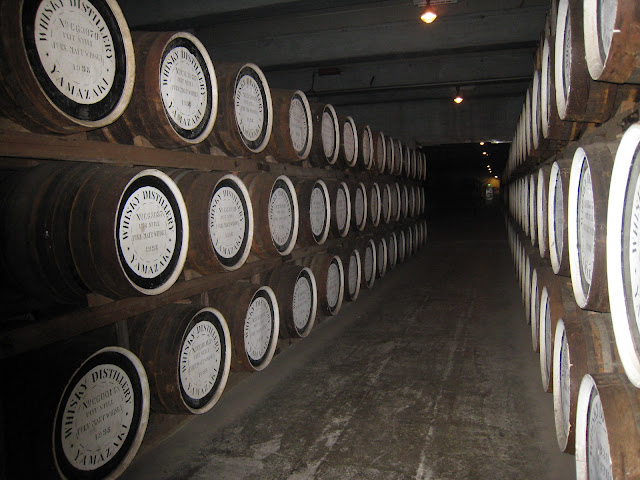 [Oak casks for aging the whisky]

The Suntory Yamazaki Distillery is open to the public. From 10:00 to 15:00 guided tours are held which pass through the factory (the three stages of malting/mashing/fermentation, the hall with the huge pot stills, and the large storehouse with the casks for aging), after which a tasting is offered. The whole process takes about one hour. Afterwards visitors can freely explore the Yamazaki Whisky Museum and the Distillery Shop. The tasting consists of Yamazaki Single Malt which has a clear and crisp flavor plus the more smoky Hakushu which is made at the foot of Mt Komagatake in Yamanashi Prefecture.


The guided tour must be booked in advance by calling (0)75-962-1423. The tour is in Japanese, but English audio guides are available. There is also an English pamphlet. The tour and tasting are free. The distillery is only a 10 min walk from Yamazaki Station on the JR line between Osaka and Kyoto (or Oyamazaki Station on the Hankyu Line).