Morpho Eugenia, written in 1992 by A.S. Byatt, and named after a beautiful Neotropical butterfly from French Guiana, tells the story of a Victorian naturalist, William Adamson, who in the early 1860s has returned from the Amazon to his native England where he is cast upon the mercy of a wealthy sponsor, Sir Harald Alabaster. He has lost all his possessions and most of his insect specimens in a shipwreck, but Sir Harald kindly hires him to classify his chaotic natural history collection and gives him refuge at Bredely Hall. William also falls with the speed of a man who has spent ten long years in the jungle in love with the eldest of the three Alabaster daughters, Eugenia. He is of a different (=lower) class than the aristocratic Alabasters, who form a tightly knit family, but – also to his own surprise – he is welcomed into their fold and into the arms of the coldly beautiful, very blond and very white-skinned (indeed “alabaster”) Eugenia. This despite the vehement opposition of one of her half-brothers, the brutish Edward. 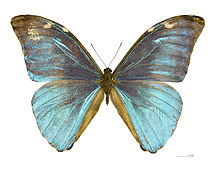 The day he wins Eugenia, William fulfills a promise: he sets a cloud of colorful butterflies free so that they swarm around his beloved in the conservatory, which is a wonderful sight, beautifully described by Byatt and very apt in the story for when he – as lepidopterologist – first saw her, she danced with her sisters like a trio of butterflies.

Thus William becomes an awkwardly grafted adjunct of the wealthy family. Of course, things are not what they seem and just as in original Victorian fiction a hasty marriage is never a good idea, as there usual are some skeletons rattling in the closet. Although playing a witty game with Victorian forms and ideas, this novella is decidedly very different from the 19th century “happy ever after” tradition – as is real life.

An at first sight not so disagreeable surprise is that the cold-looking Eugenia proves to be a fountain of passion in bed, but the less pleasant result for William who is not a fan of a large family is that she bears children like a veritable Ant Queen, producing one twin after another, making it impossible for him to leave on a new Amazon expedition. And being bombarded with five babies in three years also means the married couple has little time to get to know each other better: William feels that he is used like a breeder ant, a disposable drone, fertilizing the Queen and nothing more. Strangely enough, their kids, too, all look like Alabaster clones, none has the face of William.

The only person at Bredely Hall with whom William gradually develops a real friendship and has meaningful discussions, is another hanger-on, the assistant governess Matty Crompton, a mysterious dark fairy. William begins a study about ants with her and they even write a book together, a treatise on the social system of the local ant colonies. It is also from her that William finally learns the shocking incestuous secret of the Alabaster family – and realizes his own sore lack of insight and perception.

This novella is an ingenious postmodern work, with a generous admixture of mock Victorian texts, as well as philosophy and science – philosophy in the discussions where Sir Harald uses William as a sounding board to test out his creationist arguments on the Darwinian William (very much to the disgust of the latter), and science in the generous ant and butterfly lore sprinkled throughout the text, which is both interesting and true for its time; in both cases, writings by Sir Harald and by William are quoted extensively, as is the habit of Byatt. In the final analysis, the book is also a sustained analogy between the two communities of humans and insects; and on a micro level, William has become like certain captive ants, who imitate their captors in their behavior and may even imagine they are free, while in reality being nothing but slaves. It is a great accomplishment of Byatt that people are made to resemble insects and behave like them, and still sound perfectly human.

A. S. Byatt (real name Antonia Susan Drabble; she is the sister of the novelist Margaret Drabble) was born in 1936 and educated at Cambridge and Oxford, before teaching at various London universities until she left academia to become a full-time writer. She has written more than 10 novels and 5 short story collections. In 1990 she won the Man Booker Prize for her novel Possession: A Romance. It parallels the emerging relationship between two contemporary academics with the lives of two (fictional) nineteenth century poets whom they are researching. Byatt was a friend and admirer of Iris Murdoch and was influenced by Henry James and George Eliot. She often plays with Victorian modes of fiction in her own work, extensively “quoting” 19th century poetry and prose that she has composed in style (although ultimately her novels are squarely postmodern). She is also strongly interested in Darwinism, zoology, entomology and geology.


Available edition: Vintage International, coupled with a second novella, The Conjugial Angel, and published under the joint title Angels and Insects, Two Novellas.

The Year of the Sheep

2015 is the Year of the Sheep. The sheep or goat is the eight symbolic animal of the East-Asian zodiac. 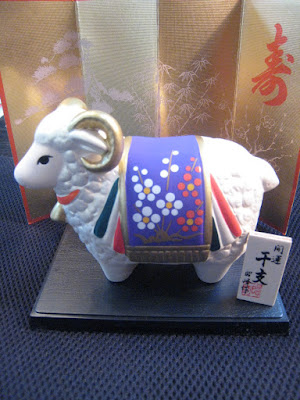 In China the goat may have been the original zodiacal animal, but in Japan this sign of the zodiac is called hitsuji, sheep (goat is yagi). But it is still a cultural import from China, for neither sheep not goats used to be very numerous in Japan, and in art before the Meiji-period they are virtually absent, too. Japanese paintings of these animals are usually copied from Chinese originals. The extreme scarcity of sheep and goats may be due to the fact that there are no grasslands in Japan - except in Hokkaido where one does find sheep today, but that is again a modern phenomenon.

People born in the Year of the Sheep are said to be elegant and highly accomplished in the arts. They are also considered to be passionate in whatever they do.

I wish you a very cultural year!