How to find a quiet spot for cherry blossom viewing in Kyoto? Due to the onslaught of mass tourism, they are getting rare, but it is still possible to find some places blissfully free of noisy crowds - the best option are small and relatively unknown temples and shrines. 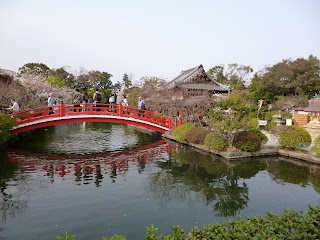 One such place is Shinsenen (‘Garden of the Sacred Spring’), a secluded pond garden housing a few small temple buildings and a traditional restaurant just south of Nijo Castle. In fact, the pond of Shinsenen used to belong to a lake that formed part of the original palace set up for Emperor Kammu in 794, when the capital was moved to Kyoto. The palace stretched for two kilometers north from here and the lake was according to Chinese geomantic rules located at its southern end. So this pond, which is now only visited by egrets, used to be the playground of courtiers in dragon boats! 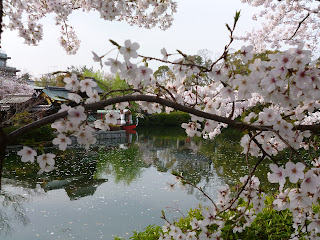 The pond was also called Oike (‘Honorable Pond’) and has given its name to the broad avenue running from the River Kamo in the east to Tenjingawa in the west, which passes just south of the pond. On the part running east from Nijo Castle, Oikedori has been broadened to 50 meters and is the avenue on which for example the City Hall of Kyoto is located, as well as many offices and hotels. The procession of the Gion festival also passes through this road. 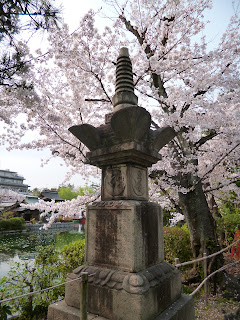 To return to Shinsenen: the remnant of the lake was saved in the 1600s when Toji temple received permission from the authorities to set up a small subtemple here. The garden in its original form already had a link with Toji, as its priest, Kukai (Kobo Daishi) prayed successfully for rain here to the resident dragon during a drought in 824.

That dragon is still honored today in the small temple on the island in the center of the lake as Zennyo ryo-o or ‘Pious Woman Dragon Queen.’ The island is connected to the shore by a stone bridge to the south and by a beautiful vermilion, arched bridge to the west. The main temple to the west of the pond is called Shinsenden and houses an effigy of Kukai. On the east side of the pond are shrines dedicated to Inari and Benten. 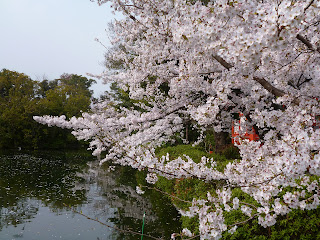 There is no entrance fee and the garden is usually visited by people from the neighborhood taking a stroll. The cherry blossoms are mainly to be found on the south side of the pond - there are even a few benches to enable quiet appreciation.
Posted by Ad Blankestijn

Earlier this week the Japanese government has announced the name for the reign of the new emperor (gengo or nengo): Reiwa or Beautiful Harmony. A wonderful term, which for the first time in history is not based on a traditional moral (Confucian) or political term, but which has been taken from classical Japanese literature, from the oldest poetry collection in Japan, the Manyoshu. The Manyoshu or Collection for Ten Thousand Generations contains roughly 4,500 poems and was chiefly compiled by Otomo no Yakamochi (718-785), who also included many poems by his own hand. The era name 'Reiwa' was selected from Book Five, from the Preface to Thirty-two Plum Poems. These poems were written in 730 at a plum blossom party held by Otomo no Tabito in Dazaifu, where he was Governor-General, and the poems in tanka form were written by Otomo himself and his 31 guests. While the poems are in Japanese, the Preface was originally written in Chinese, as is also clear from the parallelisms in its style. The new era name ‘Reiwa’ was probably suggested by renowned Manyoshu scholar Nakanishi Susumu, who was on the committee to select the new reign title.

I think Reiwa is a very happy choice, not only because I love Japanese literature, but also because I am fond of plum blossoms – in fact I like plum blossoms better than the all-too-famous sakura. Cherry blossoms only became popular in medieval times, and before that the Japanese plum (ume) ruled supreme in the country's flowery firmament, as it did and still does in China, from where it was brought to Japan in the 7th c. 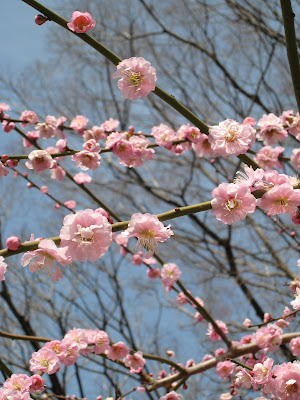 The ume is in fact not really a plum (the official name is prunus mume), but a tree (and fruit) related to but different from both plum and apricot. The Japanese plum is the flower of the perfect Confucian gentleman, the junzi (kunshi in Japanese): that it braves the cold to put out its flowers signifies its strength and endurance, while its subtle aroma stands for its virtue that unobtrusively transforms society.

Japanese plum trees can grow very old, sometimes even a few centuries, making them with their gnarled trunks a symbol of longevity and happiness. There is a famous screen painting of such ancient plum trees called Red and White Flowering Plum Trees (Kohakubai-zu) by Ogata Korin in the MOA Museum of Art in Atami.

The Japanese plum also has various practical uses: as pickled plums (umeboshi, one of my favorite delicacies) or as umeshu, a liqueur made from ume and either shochu or sake (often called wrongly ‘plum wine’ - the company for which I work, the Daishichi Sake Brewery, makes a great umeshu on the basis of junmai kimoto sake).

Finally, as the Japanese plum was the favorite flower of Sugawara no Michizane, a ninth c. statesman, scholar and Sinologist, who was deified after he died in exile, you will find it prominently in the many Tenmangu shrines dedicated to him all over Japan. 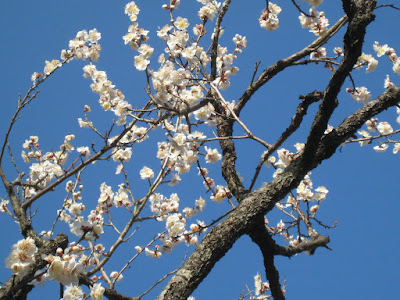 The for the era name relevant passage reads as follows (in the translation of Edwin Cranston): “It is now the choice month (reigetsu) of early spring, the weather is fine, the wind is soft (kaze yawaragu).” In other words, a good time for a plum blossom poetry party!

Rei (in Chinese ling) means ‘good,’ or ‘beautiful,’ ‘fortunate’ in this Manyoshu text. In another context rei can also mean ‘command’ or ‘order’ and that is how many foreign correspondents who apparently see phantom nationalistic bears where they really don’t exist, went wrong in articles published after the selection of Reiwa. (‘Harmony by command,’ is that how they see Japan?) 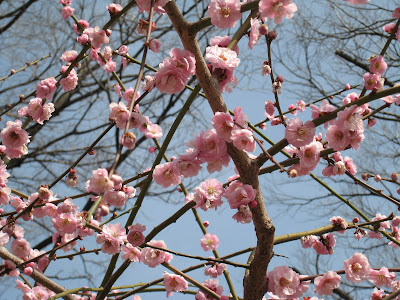 Rei has several meanings, of which one is indeed ‘command’ (such as in the compound meirei), but it also means ‘good’ as in reibo, ‘good reputation.’ And it can be used to politely indicate a family member of the person whom one addresses, such as in reifujin ('your wife'). In the quoted Manyoshu text, it only means 'good' or 'beautiful' and there are no overtones of other meanings at all.

But to return to the Manyoshu: a ‘good (or auspicious) month of early spring’ is of course the month in which the New Year falls, which according to the moon calendar is sometime in February, when also the plum trees start blossoming.

Wa is here used in the sense of ‘soft’ or ‘calm’ (said of the wind in early spring), but the basic meaning is ‘harmonious,’ ‘harmony,’ one of the oldest concepts in Japanese culture, which was already enshrined in a constitution purportedly written by Senior Prince Shotoku in 604: “Wa should be valued and quarrels avoided.” 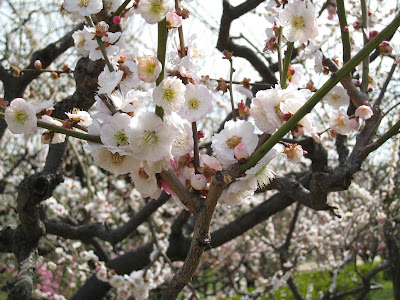 As is clear from the above translation of this passage, Rei and Wa are not combined in the original text, they were put together to make the new era name Reiwa, Beautiful Harmony. Of course, the fact that these words occur in connection with plum blossoms and the fact that the plum tree puts out its blossoms as a sort of pioneer, before other trees and plants, braving the still lingering cold of winter, was also a reason for their selection, as prime minister Abe has explained.

So this is a happy choice, by which the Japanese government undoubtedly hopes to promote interest in Japanese culture (in the first place among the Japanese themselves), something which I can only applaud. And it is in fact already happening, for every bookshop has huge stacks of Manyoshu books on display and this difficult classical text could well become a bestseller in the first year of Reiwa!
Posted by Ad Blankestijn