At the rear of a building at the crossroads between Nakayamatedori and Kitanodori, in central Kobe, a metal fence is opened every night to reveal a peculiar stone statue. The figure is lighted up which makes it even more eerie. A plaque at the back tell that this is a good luck deity called "biriken." 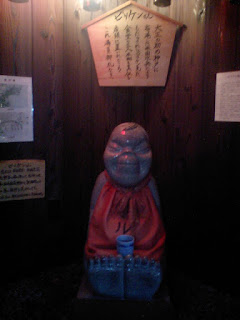 Thanks to the Wikipedia, which has an excellent article on the subject with many links, I found out this was a statue of Billiken, a charm doll created in 1908 by American illustrator Florence Pretz, who apparently saw the mysterious figure in a dream. She patented the image in 1911, with the characteristics of elf-like pointed ears, a mischievous smile from ear to ear and a tuft of hair on his pointed head. Billiken had short arms and usually sat with his legs stretched out in front of him.

Some other things regarding Billiken:

In Japan, Billiken also became very popular. He was seen as a modern Ebisu and counted as no. 8 among the Seven Deities of Good Fortune (who were anyway already mostly of foreign - Chinese - origin). His most famous statue was enshrined in the Lunar Park in the Shinsekai in Osaka in 1912 and the establishment thrived on Billiken souvenirs (as manju) until its closure in 1923.

A new statue was put up in 1980 in the Tsutenkaku Tower, also in Osaka, and there he still has his feet tickled by tourists on the fifth floor observation deck. The originally very American Billiken became a sort of ambassador of Osaka, and in 1996 he figured in the movie Billiken made by Osaka-born director Sakamoto Junji.

In fact, in the early decades of the 20th c. Billiken statues were enshrined throughout Japan, but often removed again in the war years. Kobe had its share too, and it seems justice that international city Kobe has this Billiken statue on display, all be it at the back of a building housing restaurants...

It is also a statue that from an inter-cultural perspective is quite fascinating. Take the murky origins in European elfish lore... the strange popularity among Eskimo carvers... and why would the Japanese with their myriads of deities want Billiken as a new good luck charm? Why did it appeal to them? 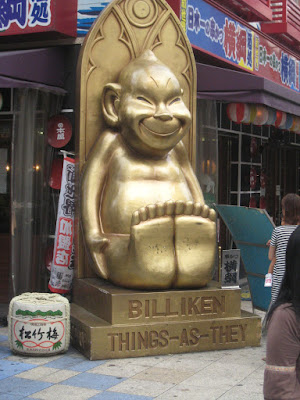 
That does not make me very fond of the little imp. He may be called elfish, but I find him almost devilish in contrast to effigies from Japan, as Ebisu and Daikoku, who just exude jolly good fun, this old geezer based on ancient European lore is somehow, well, evil...
Posted by Ad Blankestijn 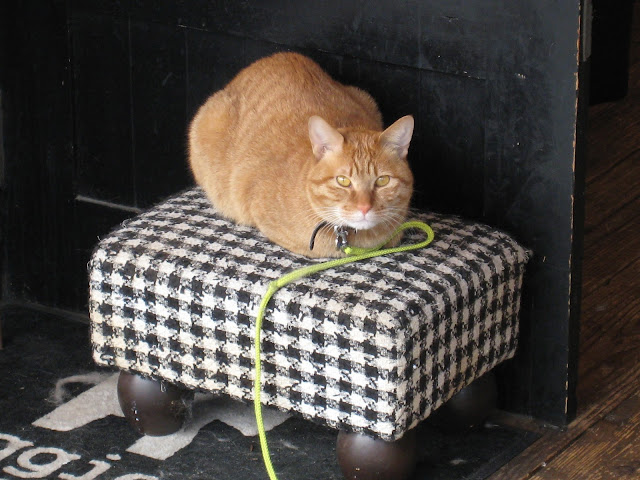 Cat in Kobe, on Nakayamatedori - the ideal life?
Posted by Ad Blankestijn

Email ThisBlogThis!Share to TwitterShare to FacebookShare to Pinterest
Labels: Kobe

Kamo no Chomei and Shimogamo

During my New Year visit (hatsumode) to the Shimogamo Shrine in Kyoto, I also walked into a sort of sub-shrine, that stands to the side at the beginning of the path leading to the main shrine. It is neglected by most people, for me it was also the first time to visit.

Aptly called Kawai Jinja, the "Shrine of the Meeting of the Rivers," as it stands near the confluence of the Kamo and Takano rivers, it is dedicated (as the shrine informs us) to Tamayori-hime, the mother of Japan's first mythic emperor, Jimmu. She is revered for her naijo no ko, the fact that she helped her son with his great endeavor of establishing the dynasty (naijo no ko, helping husband or son along, was the highest women could aspire to in the old Japan and you still hear that phrase surprisingly often). 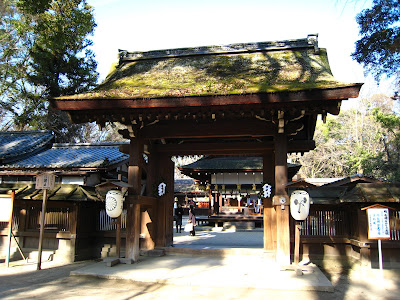 The shrine itself advertises that it was founded not long after Jimmu's time, but as this mythical hero ascended the throne in 660 BCE, that is historically quite impossible. Originally, it must have been a nature shrine, I guess, honoring the deities of the rivers who come together at this spot.

The link with Japanese mythology is probably a rather modern one, I suppose Edo-period or even Meiji, as Japan's imperial founding myths were neglected during most of the country's history and only became known again thanks to the efforts of Nativist historians in Edo times. To make things even more confusing, the deity honored in the main Shimogamo Shrine is also called Tamayori-hime, but hers is a different story, totally unrelated to the imperial founding myth.

The Kawai Shrine did exist in the 9th c., when it is mentioned in documents. In the past the shrine was rebuilt every 21 years, just like the Shimogamo Shrine itself, but that custom was abandoned in the 17th c. - the present buildings date from 1679.

What made the Kawai Shrine interesting to me, was the surprising connection with one of my favorite authors, Kamo no Chomei, the waka poet and courtier who became a recluse and wrote the Hojoki (A Tale of my Hut). 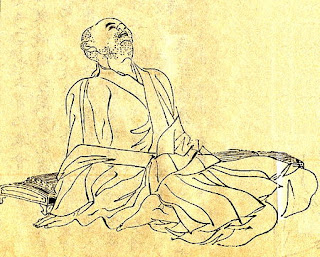 Kamo no Chomei (1155-1216) came from a family of priests attached to the Shimogamo Shrine and was himself called to priestly functions when still a young boy. He was intelligent and liked to study; at age 21 he shone at a poetry competition in the palace.

However, he did not obtain a major priestly position at the Kawai Shrine, nor was he very successful at court. These external factors combined with his personal inclination probably made him opt for the life of a recluse. In 2004 he took Buddhist orders and first lived for several years in the Ohara area northeast of Kyoto, before moving to the hills of Hino to the southeast of the capital where he built a flimsy cottage. 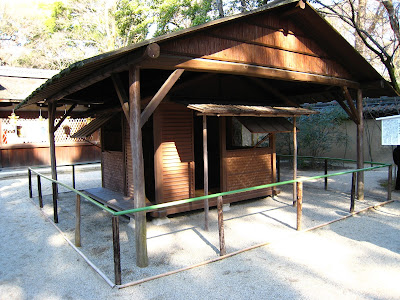 It was here, in the last years of his life, that he wrote the Hojoki. He laments the disasters that have ravaged Kyoto during his lifetime, both natural and man-made and reflects on the transitoriness of human life. Chomei finds peace in the beauty of nature, far from the vain striving of human beings.

Famous are the opening lines of the Hojoki: "The flow of the river never stops and its water is never the same. The foam that floats in its pools, now vanishing, now re-forming, never lasts long: so it is with human beings and their dwelling places here on earth."

Today, standing here at the Shrine of the Meeting of the Rivers it is clear where Chomei's inspiration came from!