Sir Vidia's Shadow, written in 1998 by Paul Theroux, is a fascinating account of a mentor-disciple relation between two unusual men, the authors Paul Theroux (the disciple) and V.S. Naipaul ("Sir Vidia"; the mentor). The book details how that long friendship started, how it developed when the disciple became a successful author in his own right, and how it ended when Naipaul gave Theroux the boot. Theroux's reaction was typical: he started writing the present book, as he felt liberated, he says - he finally had come out from under the shadow of his mentor.

The friendship began in 1966 in Uganda. Theroux was then 25 and teaching at Makerere University, Kampala, after originally having come to Africa (Malawi) for the Peace Corps. While enjoying the African continent and the free life, he was also trying his hand at poetry and magazine articles. Naipaul was about ten years older and the already famous author of five novels including A House for Mr Biswas, and several non-fiction works as his account of India, An Area of Darkness. He came to Uganda for six months as "writer in residence." The two soon met and Theroux, who spoke the language and drove a car, became Naipaul's guide and interpreter, while Naipaul coached him in writing - having him rewrite an article almost ten times.

Theroux provides a good portrait of the brilliant but eccentric Naipaul, but also of himself as an ambitious starting writer. We see Theroux literally at the feet of the idolized older artist, studying his work in detail and listening to the smallest scrap of advice. Theroux also proofread the book Naipaul was then working on, The Mimic Men. Naipaul in his turn gave the young Theroux the confidence to continue writing and later helped him find a publisher.


“Friendship is plainer but deeper than love. A friend knows your faults and forgives them, but more than that, a friend is a witness. I needed Vidia as a friend, because he saw something in me I did not see. He said I was a writer.”

When Naipaul left Uganda and returned to the U.K., Theroux soon visited him during the Christmas holidays, staying with Naipaul and his wife Pat. And when Theroux moved on to a University job in Singapore, he kept up a frequent correspondence with Naipaul, what he himself calls a "correspondence course in writing."

In 1972 Theroux settled down in the U.K., where he would remain for the next decades - in 1967 he had married an English woman whom he had met in Uganda; they had two children. This gave Theroux the chance to meet with Naipaul again, although not very frequently as both writers were also busy world travelers and on top of that, Naipaul lived in rather remote English countryside. After Theroux himself became famous thanks to the publication of The Great Railway Bazaar, which was published in 1975, the relation started to change subtly as both men had become more like equals - they also started drifting somewhat apart and in Theroux's opinion, Naipaul became more moody and self-important. Theroux also became more financially successful than Naipaul, although according to general critical opinion Naipaul is in a higher class - he not for nothing received the Nobel Prize in Literature in 1992.

The end came in 1996, when Naipaul snubbed Theroux in the street, apparently angered by Theroux's attitude towards his second wife, a Pakistani journalist he had unexpectedly married. Theroux felt deeply hurt (something which shows in the last two chapters, which are a bit venomenous and self-pitying), but was also free to write Sir Vidia's Shadow.

Is it a good book? In general, opinions are sharply divided, but I would say yes, it is a fascinating Johnson-Boswell account, difficult to put down. On the whole, I think Theroux writes truthfully - this is not a tale of sour grapes or dirty laundry. Theroux greatly admires Naipaul as an artist and that shows through on every page. Theroux does in this book what he does best: he is not a superb stylist or deep thinker, but he excels in sharp observations (the African scenery!) and memorable characterizations, here in the first place of his subject, V.S. Naipaul.

By the way, all bitterness is now out of the air again, as both authors have shaken hands in 2011 at the instigation of Ian McEwan.

[This is a revision of a post written some years ago]

This is where one begins. On this mountaintop, at the holiest spot of this sprawling complex of temples, in the shadow of these towering cedars, one stands before the tomb of the saint whose life and legacy inspire the pilgrimage. Here one asks his blessing, his guidance and protection, his company, on the pilgrimage to come. (Japanese Pilgrimage by Oliver Statler, describing a visit to Koyasan before embarking on the Shikoku Pilgrimage)

One of the things still squarely on my ToDo list, is the Shikoku Pilgrimage of 88 Temples. A few times, I have dipped in a toe, so to speak, by visiting No. 1, Ryozenji, in Tokushima; No. 31, Chikurinji in Kochi; No. 51, Ishiteji, in Matsuyama; and No. 84, Yashimaji near Takamatsu. But these were random visits and not part of a pilgrimage. While this big but pleasant task is still glittering in my future, I am thinking about the book that first aroused my interest in the Shikoku Pilgrimage: Japanese Pilgrimage by Oliver Statler. It was Statler's fascinating account that made me fantasize about threading in the footsteps of Kobo Daishi. In this expertly written book, the author combines a personal account of the Pilgrimage with substantial cultural information on the topic. I first read Japanese Pilgrimage in the mid-1980s and that book now is so brown and broken that I have to be careful when turning the brittle pages. I think I have read it at least three times. 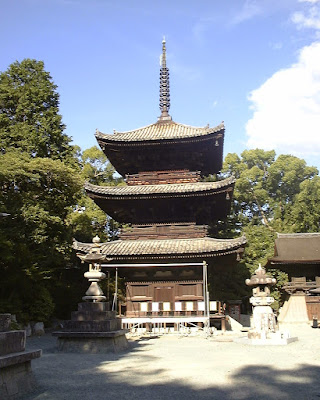 Oliver Statler (1915-2002) graduated from the University of Chicago and came to Japan with the American army in 1947. He was gripped by the beauty of wood block prints of which he became an internationally known expert. His interest in the Pilgrimage dated from a first visit to Shikoku, in 1961; he first performed the whole 1000-mile circular pilgrimage in 1968. From 1969-1971 he lived in Matsuyama on Shikoku in order to further study the pilgrimage, and in 1971 he made the entire pilgrimage again (with a Japanese friend - this is the biographical account we find in the book). It was a Guggenheim Fellowship which permitted him in 1973 to finally write the book, which was first published in 1983.

As Japanese Pilgrimage shows, Statler was a beautiful stylist of the English language. His account is a lyrical, impressionistic portrait of the Shikoku Pilgrimage, anecdotal and episodic and yet securely built on an underlying narrative plan. It is well-researched and highly evocative of Japanese religiosity as it functions in daily life. It also contains biographical information about the priests and pilgrims prominent in the long history of the pilgrimage, starting with Kobo Daishi (774-835), saint, miracle worker, flamboyant evangelist, scholar, poet and even (later) a deity. He struggled to find the "right way" here in the mountains of Shikoku; and he sought it in China where he inherited the mantle of a great esoteric Buddhist master. He finally reached the understanding that all human beings possess the seed of Buddha and can, with hard effort, nurture that seed and reach enlightenment during this present life.

The book is divided into three sections. In the first one ("Master"), Statler gives an outline of the historical personage of Kukai (later known honorifically as Kobo Daishi), the 8th/9th-century monk and founder of the Shingon school of Buddhism in Japan upon whom the pilgrimage is focused. In the second part ("Savior"), Statler attempts to portray how layers of legend and belief enlarged Kobo Daishi and how faith in him as a divine savior was spread among the populace by wandering, itinerant holy men (hijiri). Finally, in the third section ("Pilgrims"), the pilgrimage itself comes into sharper focus, both through discussions with current pilgrims and priests and accounts of past pilgrims such as the Kabuki actor Ichikawa Danzo VIII and haiku poet Masaoka Shiki.

And while telling these three stories Statler shares with the reader his own experiences of the thousand-mile journey, a demanding route through deep mountings and along rugged coasts, taking almost two months to walk. All three sections are full of legends, folk stories, anecdotes and miracle tales that perfectly capture the mood and feel of the pilgrimage.

Perhaps to cut back on Japanese names for those not used to the language, Statler calls the 88 temples by number ("Number One," etc.) , but at the back of the book he provides a concordance with the temple names. The author also skips back and forth (without discussing all 88 temples) and doesn't give any practical information - in other words, this is not a guidebook. It is a book about the spirit of the pilgrimage, its history and its culture. You don't even actually have to perform it to enjoy this fine account. But that is a dangerous thought for me - it could make me lazy, for the Pilgrimage is still waiting, on my very doorstep as I now live in Kobe instead of Tokyo...

Remember, the Pilgrimage is circular, and like a circle, it has neither a beginning nor an end; like the quest for Enlightenment, it is unending...


Biography at University of Hawaii website. Bibliography of books on the Shikoku Pilgrimage. For a guide in English, see A Henro Pilgrimage Guide to the Eighty-eight Temples on Shikoku, Japan, by Taisen Miyata. A scholarly account is Making Pilgrimages: Meaning and Practice in Shikoku, by Ian Reader. More scholarly articles on the Pilgrimage can be found in No 24:3-4 (Fall 1997) of The Japanese Journal of Religious Studies (available online).