The language of Kyoto (Kyo-kotoba)

The language spoken by the inhabitants of Kyoto.... Don't make the mistake of calling it a "dialect" - the language of Kyoto has for centuries been the norm in Japan and Kyotoites are proud of their heritage!

Its roots are in the language of the court and the aristocracy, as well as the townspeople - the traders and craftspeople (including the Nishijin weavers) who catered to the upper classes, and copied their language, plus the elegant geisha towns. Kyoto language is soft and elegant, consonants are long drawn out and the speed is slow. Often circumlocutions are used. It is a somewhat feminine language. 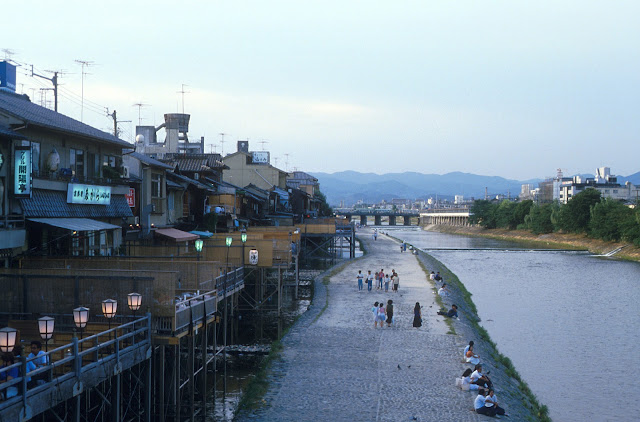 [The river Kamogawa in Kyoto]

The language is also very polite, and therefore quite vague. It is full of subtle nuances and often you do not know whether something positive or negative has been said. People can criticize by praising.

Here are some typical Kyoto expressions:

irasshaimase (welcome) becomes "oideyasu" or, even more polite (only in case of people one knows well), "okoshiyasu"

ocha (tea) becomes "bubu" (both of these I have never heard from my Kyoto family, certainly not "bubu" for ocha)

nenaide itsu mademo okite iru (not getting sleepy, although it is late) becomes "me ga katai" lit. "the eyes are stiff"

The Day of Sake and the Sake Year

Today, October 1, is the "Day of Sake." On this day, the new sake year starts for breweries. Japan's premium sake makers, who follow tradition by only brewing in winter, wake up from their long summer slumber. The low temperatures in winter make that there are less harmful microbes around (after all, the fermentation tanks are open!) and they also make it possible to control the brewing process better. Brewing is all about temperature control.

In October the seasonal workers, including the top man, the toji or master brewer, return to the brewery and start cleaning the vats and all the implements. The new sake rice has by now been harvested and rice polishing can begin.

Every brewery has a Shinto altar dedicated to Matsuo-sama, the patron-deity of sake brewing, from the large Matsuo Taisha Shrine in western Kyoto. Here a prayer is said for safety and success in brewing before any real work starts. 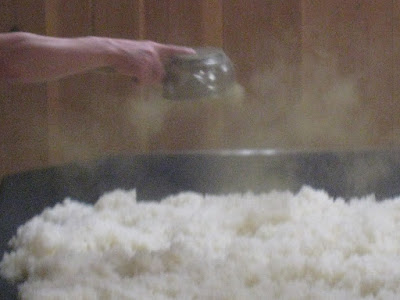 Usually first some non-premium sake, or the simpler honjozo, is brewed. The most difficult processes, for the ginjo sakes, usually have to wait until the coldest time of the sake year, January and February.

The first sake brewed in December, is ready in January. When that sake is pressed, many breweries hang up a sakabayashi, a ball made from cedar twigs. Traditionally, these balls are provided by the Miwa Shrine in Nara, another Shinto establishment deeply involved in sake matters. The balls used to come from the sacred woods of the shrine, but I doubt that still is the case.

For New Year, breweries sell specially bottled New Year sake, sometimes with a few gold flakes added to the brew. Nigori-sake, "cloudy" sake or sake that has not been finely sieved and therefore still contains some particles of rice, is also popular at this time. 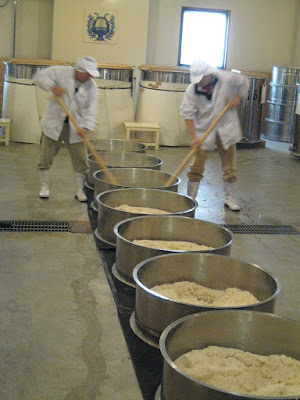 [Yamaoroshi process for making the Kimoto yeast starter at the Daishichi Sake Brewery]
Many months of hard work continue (sake brewing also goes on during the New Year holidays) and then, finally, in March the last rice for the last batch of sake is steamed. This is celebrated in a short ceremony, koshiki-taoshi, where the steaming vat, the koshiki, is turned on its side to be cleaned. All brewery workers are releaved their hard task is almost over and a party is held. The next month, the last brewed sake is pasteurized and with the rest of the sake from this winter, stored as genshu in the storage tanks of the brewery to mature during the summer. This is the time the master brewer and the other seasonal workers leave the brewery.

Not all sake is pasteurized and today it is common to sell part of the genshu in spring as unpasteurized, un-matured sake. This sake is called "hatsushibori" (first pressing); you also come across the term "shinshu" (new sake"). This type of sake has a young brashness and freshness that makes up for the slight rawness of the taste. Unpasteurized, it is of course drunk cold and has to be handled with care.

During the next months, as spring turns into summer, more unpasteurized sake is sold as  "namazake", which means that it is indeed a bit "raw". Drunk cold, this is a popular and refreshing  summer drink.

July is the time for "hatsunomikiri," a day when the toji returns to taste the maturing sake and check on its progress. "Hatsu" means "first" and "nomikiri" means "opening the tap" at the bottom of each tank to do the tasting. Now such tastings are complimented by monthly chemical analysis of the contents of the tank, to check in detail on the state of the precious genshu.

Then autumn comes along and the properly matured sake is now once again pasteurized, bottled and finally sold. Again a small amount of the sake is not pasteurized for this second time, but sold directly from the maturing tanks as "hiya-oroshi," the sake sold when the weather gets colder so that a second pasteurization is not asolutely necessary. At least, that was the case in the Edo-period. The hiya-oroshi season is still in full swing when the sake year ends and a new year comes along. Compared to the Shiboritate sake mentioned above, Hiya-oroshi is milder and rounder, thanks to the maturing process, but still keeps a greater freshness because of skipping the second pasteurization. Kampai!
Posted by Ad Blankestijn