Science and education are the pillars of a modern country. This is demonstrated clearly by the development of Japan since the late 19th century. Two small museums of Kyoto reflect this development in their displays: The Kyoto Museum of School History shows how the citizens of Kyoto tried to shore up the city's economy, damaged by the departure of Emperor and court to Tokyo, by themselves introducing universal education before the national government did so. And the Shimadzu Memorial Hall shows how interest in science and technology, here by a father and son who were both inventors, has created today's advanced industry in Japan. 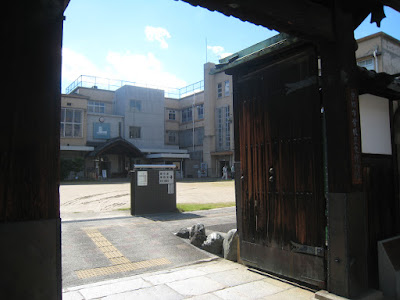 1. Kyoto Municipal Museum of School History (Kyotoshi Gakko Rekishi Hakubutsukan)
Kyoto was faced with an economic crisis when in 1868 the capital was transferred to Tokyo and the court and aristocracy, which for many centuries had been catered to by Kyoto's numerous artisans, packed up and left. Happily, the citizens of Kyoto were intelligent and wise, and they realized the enormous importance of education for the future. They were also already organized in a form of communal self-governance based on city wards, which made it easier to come into action. So based on donations by almost every family in Kyoto, 64 "bangumi" primary schools were founded in 1869 ("bangumi" are school districts based on wards). In other words, the citizens of Kyoto introduced general compulsory education three years before it was introduced in the whole country.

To commemorate this fact, Kyoto has set up the Kyoto Municipal Museum of School History, which is aptly located in a former Meiji period primary school, south of Shijodori and Gion not far from Bukkoji Temple. It has educational materials and textbooks on display, but also paintings and crafts donated by the graduates of those schools. There are displays on late Edo-period education, about the setting up and history of the "bangumi" schools, and about the education system in the Meiji, Taisho and Showa periods. There is a room with textbooks everyone can read (in copy). A film is also shown about the history of schools in Kyoto. Finally, the Japanese-style paintings in the collection form an extra enticement to visit. 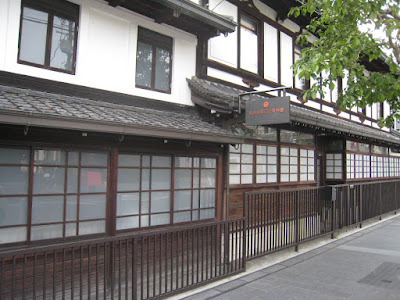 2. Shimadzu Foundation Memorial Hall (Shimazu Sogyo Kinen Shiryokan)
Shimadzu is a manufacturer of precision measuring, medical, aviation and industrial instruments. It is one of the many companies originally set up in Kyoto, showing that this city was not only bent on tradition but also had (and still has) a strong innovative side, not in the least thanks to its many excellent universities. Shimadzu Corporation was set up by Shimadzu Genzo in 1875 at Kiyamachi in Kyoto, at the northern end of the Takase River (there were more laboratories and industrial facilities in this area in the early Meiji period using the latest technologies from Europe).

The museum is housed in a historical two-story wooden building in which Shimadzu Genzo lived for 45 years and which he used as his head-office. Shimadzu Genzo was the son of a craftsman of Buddhist altars, but as he was interested in science, he studied at the Physics and Chemistry Research Institute in the Nijo district and started manufacturing instruments for physics and chemistry. Although born in traditional Kyoto, he strongly believed Japan should become a world leader in science. In 1882, his catalog of scientific instruments had expanded to 110 items. He was also invited to teach at the Kyoto Prefectural Normal School. Unfortunately, he suddenly passed away in 1894.

His son, Genzo Jr., succeeded him and happily, the son was even more of a science geek than the father. He was a remarkable inventor who earned the nickname "Edison of Japan." In 1896, only a year after Wilhelm Röntgen discovered X-rays, he succeeded in producing an X-ray image and in 1909 he developed the first medical X-ray device in Japan (exhibited in the museum). Ever since, Shimadzu has remained a pioneer in the field of medical X-ray devices. In 1895, Genzo Jr. also began manufacturing storage batteries, which led to a new business, GS Battery (named after his initials), which now is GS Yuasa Corporation, and one of the world leaders in its field - its batteries are used in electric cars as well as in the space station.

In 1934 Shimadzu developed Japan's first spectograph, entering the field of analytical instruments, which since has remained a core business. Shimadzu's technology really came into its own during the years of rapid economic growth after WWII, and many important products were introduced one after another. The company also expanded abroad.

In 2002, Tanaka Koichi, at that time assistant manager at Shimadzu Corporation's Life Science Research Center, was awarded the Nobel Prize in Chemistry, which drew much attention from around the world.

This interesting history is highlighted in the museum, with a collection of historical and new instruments as well as various related historical reference materials and artifacts. The museum really helps visitors understand how Japan could grow into such an advanced science nation.

[For opening days/hours and location - plus maps - see the English websites of these museums, via the links above in the post]