The "Nihonmatsu Chochin Matsuri" (Lantern Festival) is one of the three largest lantern festivals in Japan. It is held every year from October 4 to 6. 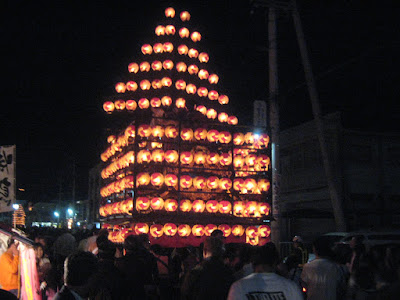 In fact, it is the annual festival of the Nihonmatsu Shrine, going back for 350 years. But contrary to for example Kyoto's Gion Festival where the daytime parade of floats is the main event, in Nihonmatsu the "yoi-matsuri," the evening previous to the festival on October 4, is considered as the most interesting spectacle.

Seven carts from different wards of the town are decorated with about 400 lanterns, strung in six layers above each other. A sacred flame is brought from the shrine and then all the lanterns are lighted. Next the floats parade through the town to the accompaniment of festive music of the drums and pipes played by people inside the carts. Every float has its own festival music and typical rhythm. 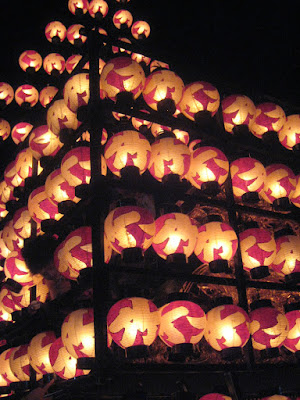 Young people follow the carts energetically dancing and shouting "washo, washo" to the music. The lanterns shine in the dark sky of early autumn and from the many stalls lining the street waft the nostalgic smells of fried squid, soba and octopus balls. The nice thing about this festival is that it is still rooted in the local population. They hold it for their own enjoyment and not just to attract tourists.
Posted by Ad Blankestijn