In a previous post I wrote about the food-addiction of the Japanese. With the culinary passion here running as high as it does, it is not surprising that also among manga comics there is a category of "gourmet manga." Here is my take on the most famous one: Oishinbo. 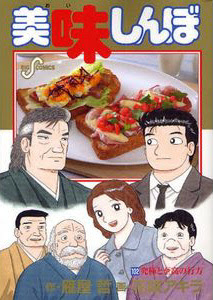 Oishinbo (usually translated as "The Gourmet" or "Taste Quest"), serialized since 1983 in Big Comic Spirits, is about the search for the ultimate menu. Writer is Kariya Tetsu, and the manga is drawn by Hanasaki Akira. The comic has not run continuously since it started, as the creators regularly take time off to do food research. In 1987 they won the Shogakkan Manga prize.

The Oishinbo series is published in book form by Shogakkan and has enormous print runs: individual titles often break the one million barrier and the whole series has crashed the hundred million gates... a whole lot of paper and a cash cow for the authors and publisher. Of course the manga has spawned all possible kinds of off-spring: anime-films (1988-92, 136 episodes), a live-action film (with Mikuni Rentaro as the stern father, 1996), TV drama, TV shows, recipe collections and games.

Two reporters of the Tozai Newspaper, young dog Yamaoka Shiro and female sidekick Kurita Yuko, go in search of the “Ultimate Menu” for the celebration of their newspaper's hundredth anniversary. But at the same time, the rival Teito Newspaper has entrusted a plan for a “Supreme Menu” to the older, experienced Kaibara Yuzan of the Gourmet Club. Yamaoka Shiro is in fact the cast-out son of Kaibara Yuzan (he has received his mother's name). So the stage is set for a dramatic struggle between the son's “Ultimate Menu” and the father's “Supreme Menu.”

Yamaoka is wild and sometimes arrogant, but possesses an extensive knowledge of haute-cuisine and the necessary developed palate. Kurita fully shares his culinary obsession. There is a degree of attraction between them, and later in the story they marry, but it is not their relationship that is central to the manga. That is rather the drama between Yamaoka and his father, a stern figure who is also calligrapher and ceramic artist and who seems modeled on the 20th c. potter/gourmet Kitaoji Rosanjin.

In the whole series, much care is given to the depiction of food, of the widest variety, both from Japan and other cultures. In fact, every imaginable type of food availabe in Japan is present, from sashimi and sushi to exquisite French, from sake to wine, from American sandwiches to curry rice...

Of course, this would not be a Japanese manga if the obsession with ultimate quality was not very prominent again: the best way to make a certain dish, how to tweak a recipe to perfection, how to find the ultimate sharp knife to cut blowfish, the most superb use of a dripping glass to make coffee... etc. etc.

In short, the Oishinbo series is fun to read, and on top of that not only a perfect introduction to Japanese cuisine, but to Japanese culture in general.

Plums and paintings in Atami

Thanks to its balmy climate (and the fumes from its hot springs), the plum trees in Atami are among the first to bloom in the wider Tokyo area. So for early flowering trees visit this resort town and after tearing yourself loose from the steaming baths, head for the area just west of the town where you will find the Atami Baien (Atami Plum Tree Garden). 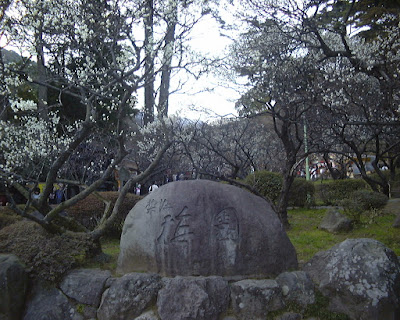 Atami Baien was opened in 1886, so its 730 plum trees representing 64 varieties are already of venerable age. The garden was established by a wealthy merchant from Yokohama, who as a dutiful subject two years later donated it to the Imperial House. As imperial property, it was for a long time shielded from the unruly masses, until in 1947 the park was given to the state, and in 1960 became the property of the City of Atami. 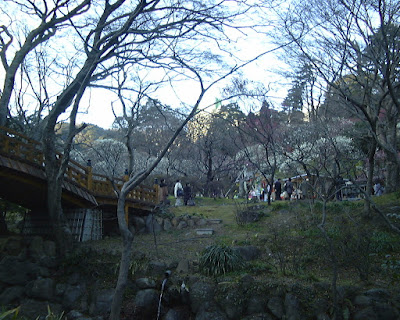 The park lies in a beautiful spot, a valley in a mountainous area, and there are five bridges and even a waterfall called "Plum View." Unfortunately, I did not find it in a very pristine state, as there were too many visitors and above all, the smell of the scorched squid from the yatai stands chased away the delicate fragrance of the plum blossoms... 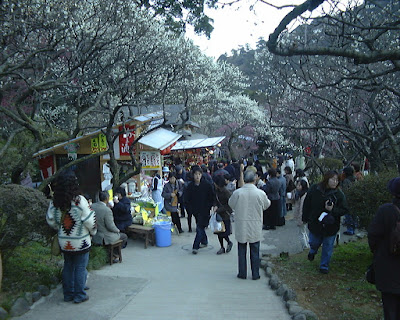 But you should still go to Atami in plum blossom time, if not for the real blossoms, then for the painted ones. You will find these in the famous MOA Museum of Art, in the form of the Red and White Flowering Plum Trees, a pair of two-panel screens by Ogata Korin (1658-1716). According to a tradition that is undoubtedly unreliable, that painting is based on a real plum tree in the Shimogamo Shrine in Kyoto. 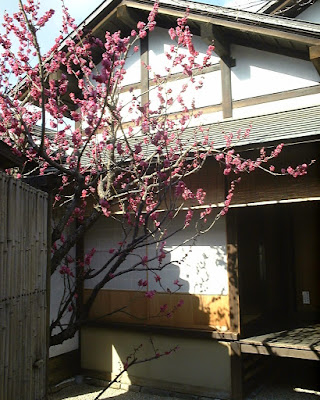 [Plums in the garden of the MOA Museum, Atami]

The MOA Museum has great paintings, ceramics, Buddhist statues, a copy of the Golden Teahouse of Hideyoshi, a reproduction of the mansion of Ogata Korin in a nice garden, and a great view of the bay of Atami from huge windows. The best time to visit is February, the only period the Korin screens of red and white plum blossoms are shown AND when the plum trees outside in the real world are also blossoming. The combination of painted trees and real trees makes for the perfect trip to Atami! 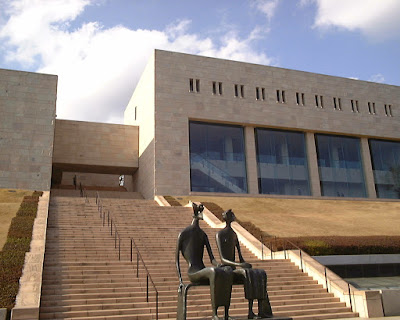 MOA Museum of Art
Hours: 9:30-16:30; CL Thurs (except NH), NY
Access: From JR Atami St take a bus to MOA Bijutsukan Bus Stop; or a short taxi ride. Between the museum and the Atami Plum Garden a taxi is the most convenient means of transport. Atami is 50 min by Shinkansen or 1.5 hrs by kaisoku on the Tokaido line from Tokyo.
Official website

Yesterday was Setsubun in Japan, the early spring festival where bad influences are cleansed from the soul. Or are the dark spirits of winter chased from the house? At least, via various strategies care is taken that devilish forces do not enter your abode: you may place thorny holly leaves under the gate, or, even better, smelly sardine heads (good against any visitors). 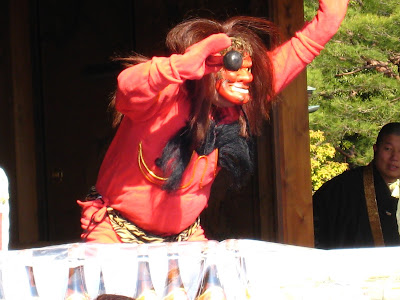 In addition, the bean-throwing rite (mamemaki) is performed while shouting "Devils go out, Luck come in" (Oni wa soto, Fuku wa uchi). Afterwards one should eat the same number of beans as one's age to spend the year free from problems. The practice of scattering beans to drive away demons is an example of a traditional magical rite to ward off evil.

In fact, in the past there were four Setsubun dates indicating the change of the seasons. "Setsubun" is the day before the first day of spring, of summer, of autumn and of winter. The first day of the season is - in the same order - called Risshun, Rikka, Risshu and Ritto. But due to the popularity of the Setsubun festival in spring with its magic ceremonies, "Setsubun" afterwards came to be exclusively used for the spring Setsubun.

So today is Risshun, although there is nothing springlike in the air yet...

Bean throwing ceremonies are held at shrines and temples throughout Japan on Setsubun. Unfortunately, yesterday was an overcast and rainy day and as I was busy, too, I did not visit any temple. So here are some pictures from 2007 which I did not have time to post last year!

I took these pictures at Shogoin Temple in Kyoto. Shogoin is a relatively unknown temple (the sweets sold in the neighborhood called Shogoin Yatsuhashi are better known). 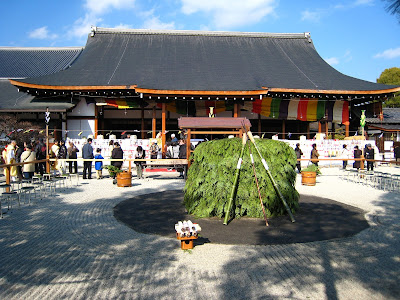 Shogoin has an interesting origin: when the Retired Emperor Shirakawa made a pilgrimage to the sacred Kumano region in southern Wakayama, the priest Zoyo served as his guide. Out of gratitude, the Emperor later helped Zoyo establish a temple in Kyoto - that was in 1090. The temple was named Shogoin, meaning "Guardian Temple of the Retired Emperor." Zoyo had been a yamabushi, a priest retreating to the mountains for practicing austerities, and the new temple became a yamabushi headquarters in Kyoto - a function it still fulfills.

The association with the imperial family also continued in later ages. When the Imperial Palace was destroyed by fire Shogoin served as a temporary palace. The temple still possesses some art works and personal effects of Emperor Kokaku, and also the Shoin building was formerly part of the palace.

As Shogoin is not a tourist temple, prior consent is needed for visiting - but on Setsubun the grounds are open, as is the Shoin building from which the bean-scattering ceremony is performed.