A matatabi jidaigeki from the years that even Toei – known for its clean jidaigeki in the 50s – had turned violent. We get the usually intense performance by Nakamura Kinnosuke as the hero Tokijiro and as a bonus an early Atsumi Kiyoshi (of later Tora-san fame). 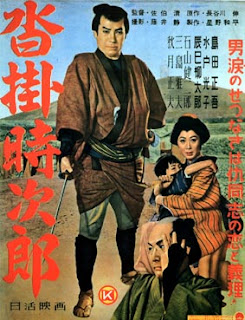 The film is based on a play by Hasegawa Shin, the author who also invented the word “matatabi” in 1929. The first Tokijiro film was already made in 1929 with Okochi Denjuro; 7 more versions would follow before the present one, with actors as Kataoka Chiezo (1951), Kazuo Hasegawa (1953) and Ichikawa Raizo (1961). The name of the hero refers to the post town where he was born, Kutsukake, which happens to be today's resort town of Karuizawa. At the same time, “kutsukake” means “put on your shoes,” symbolically referring to all the wandering the hero has to do.

“Matatabi” are “ronin among the yakuza,” so to speak, they do not work for a fixed boss or belong to a gang, but instead travel around the country as lonely wolves. Usually they are gamblers - also the blind masseur Zatoichi was a matatabi. They live thanks to the jingi code of “hito-yado hito-meshi,” or “one night's lodging, one meal” which all yakuza have to provide for each other. But when they take off their waraji sandals at the entrance of a local boss's house, and accept the lodging and the food, they have to perform one task in recompense. This task can be a nasty one that the gang itself is unable or unwilling to do. It can also mean killing an innocent man. In the film, Tokijiro wants to get away from this yakuza life, but he simply can't – he has no income and needs the lodgings and the meals and so must continue with his lonely wandering, doing dirty jobs. We find the same dilemma in the ninkyo films of Takakura Ken and Tsuruta Koji which were also made by Toei.

The film starts on some comic notes provided by Atsumi Kiyoshi playing the “younger brother” (called “Asakichi of Minobu”) of Tokijiro. He visits a geisha house where he by mistake embraces the cat while waiting for the geisha who is gorging herself on food in the kitchen (judging that this is not such an important customer). This is a small but fine role by Shin-Toho glamor girl Mihara Yoko. But the story soon turns dark. When Tokijiro walks away from another dirty job, Asakichi wants to do his duty and they quarrel. Asakichi goes off alone and decides to fight, but as he is no more than an innocent peasant, he is cruelly killed. Tokijiro avenges him and continues on his dark journey.

Next Tokijiro stays with the Konosu gang and is told to kill a man called Sanzo of Muta (played by Azuma Chiyonosuke). Tokijiro kills the man he has no quarrel with and accepts the dying man's request to accompany his wife Okinu and young son Tachikichi to a town where family is supposed to live. He recognizes the wife and son – he already met them on the ferry, when she kindly gave him a persimmon. Okinu is a fine role played by Ikeuchi Junko, who regularly appeared in both comedies and jidaigeki in the 60s, before becoming a TV drama star.

But the family is dead and Tokijiro decides to bring them to his own town Kutsukake. But on the way Okinu falls ill – she has pneumonia in an advanced stage. They stay at an inn in Shimo-Nita (all the settings of the film are in Gunma Prefecture) and in order to pay for lodging and her medicine, Tokijiro has no other option than to work again for the local yakuza. They live happily like a small family, but as soon as Okinu is better, she suddenly disappears with her son. Obviously, she is mentally torn apart by the feeling of duty towards her dead husband (killed by Tokijiro) and her love for Tokijiro. A classical case of a giri-ninjo conflict.

A year later Tokijiro happens to meet Okinu and her son in Takasaki and as she is very ill he again takes them under his wing. But she dies while he is out working for her medicine. The inn-keeper's wife puts lipstick on her to show her as beautiful as possible - a scene that reminded me of Naruse's Ukigumo, where the husband puts lipstick on the lips of his dead wife, or even the recent Okuribito...

Fed up with all the killing he has to do, Tokijiro finally decides to change his ways and takes Tachikichi with him to start a new life. As killing is a second habit for him he even throws away his sword...

Towards the end of the film with its repeated scenes of the ill Okinu, the pace slows down too much - the first half is the best, also thanks to the humor of which I would have liked more in such a dark story. The swordplay scenes (satsujin/tate) are excellent - how could it be otherwise with Nakamura Kinnosuke. They have the realistic bloodiness that was common in the sixties but without overdoing it. The filming by Kato Tai has great atmosphere and is very stylish. Kato Tai also directed “Mabuta no Haha,” another famous jidaigeki set in the yakuza world, as well as several films in the Hibotan Bakuto or Red Peony series. He also made many ninkyo films.