After the great Tokyo earthquake of 1923, "Edokko" Tanizaki Junichiro, Japan's foremost 20th century author, moved to the Kansai. Fear of another quake and despair at a quick recovery of the metropolis were certainly factors, but in his literary work Tanizaki also was reaching a stage of maturity where he reached out to Japan's tradition, instead of being inspired by Poe, Baudelaire and Wilde, as in his early works. The Kansai, with the old capital of Kyoto, was the stage where that tradition had been played out and therefore the most suitable place to live. 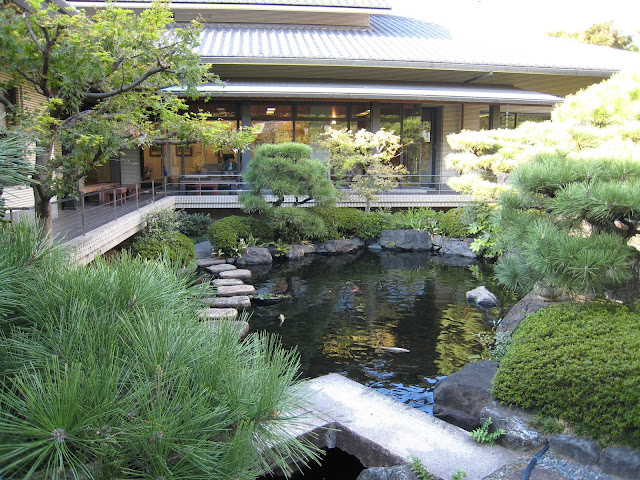 [Garden of the Tanizaki Junichiro Memorial Museum of Literature]
Tanizaki was extremely sensitive to environment - also in the more private sense: he almost continually moved house, seeking the best place for the novel he was writing at that particular time. In the 20 years he lived in the Ashiya-Kobe area, between 1923 and 1943, he moved house more than 10 times! Important not only for his private life, but also for his artistic creativity, was the meeting with Ms Nezu Matsuko, the wife of an Osaka merchant, who divorced her husband to marry Tanizaki.

Matsuko was the second of four sisters of an old family who together became the model for The Makioka Sisters, Tanizaki's largest canvas. She has been called the "embodiment of the traditional Kansai culture." Between 1928 and 1935 Tanizaki published several important novellas that all relate to the Kansai or Japan's traditions. The first was Quicksand, written in the Osaka-dialect, about a complex relation between two women; Arrowroot, a nostalgic trip by two friends into the legend-haunted mountains of Yoshino; The Reed Cutter, about a contemporary traveler who dreams of ancient poetry and courtesans; and A Portrait of Shunkin, in which an older attendant blinds himself for the sake of the blind musician he serves so that she is not shamed by her disfigurement.

Tanizaki also made his first version in modern Japanese of the 11th c. novel Tale of Genji while in Ashiya. Like the Makioka Sisters, which he started writing here, the Genji is a novel with many interesting women characters - and not coincidentally: Tanizaki's life in Ashiya was not only shared by his wife Matsuko, but also by her two sisters and her daughter (from her previous marriage), and Tanizaki probably felt like a Prince Genji among all those women.

After Ashiya, Tanizaki moved to Kyoto, where he lived in a beautiful house near the Shimogamo Shrine. This house became the setting of As I Crossed a bridge of Dreams, a dream about two mothers. He spent his final years in coastal spa town of Atami, as the hot summers of the Kansai became too severe for his condition of high blood pressure.

The city of Ashiya has set up the Tanizaki Junichiro Memorial Museum of Literature to comemmorate Tanizaki's long sojourn in this area (although he lived most of the time in what is now Kobe rather than in Ashiya).

As is usual for literature museums, exhibits consist solely of photos, first editions, text panels, letters and other paraphernalia, so the better your Japanese, the more interesting the museum - there are no English captions. But it is a "must" for Tanizaki fans and the changing exhibitions are quite interesting - I saw one about Tanizaki and his translation of the Genji Monogatari.

The Tanizaki Museum stands next to the Ashiya City Museum, in a residential area. The museum has a traditional garden that is based on the garden of Tanizaki's Shimogamo residence: a pond with carp, and a good view from the veranda.

Tanizaki Junichiro Memorial Museum of Literature, Ashiya. Tel. 0797-23-5852. Address: 12-15 Isecho, Ashiya 659-0052 Hrs: 10:00-17:00; CL Mon (except if NH, then closes Tues), NY, BE Access: 15 min on foot from Ashiya St on the Hanshin line. Exit the station by the exit for the Ashiya City Hall and follow the broad street running along the city hall; keep going straight though a residential district after passing under the highway; finally turn left onto a sort of dyke; after another 5 min you will see the museum on your left, together with the Ashiya Museum of Art and History. http://www.tanizakikan.com/ (only Japanese)