Tanizaki's "House of the Makioka Sisters"

The house Tanizaki lived in for the longest period during his sojourn in the Kansai, was a house he called "Isho-an" in what is now Uozaki in Kobe. Although it has been moved 150 meters from its original location due to the extension of a road (it stood at the bank of the Sumiyoshi River), it still exists and is open to the public for free on Saturdays and Sundays. It is an excellent companion to the Tanizaki Junichiro Memorial Museum of Literature in Ashiya. 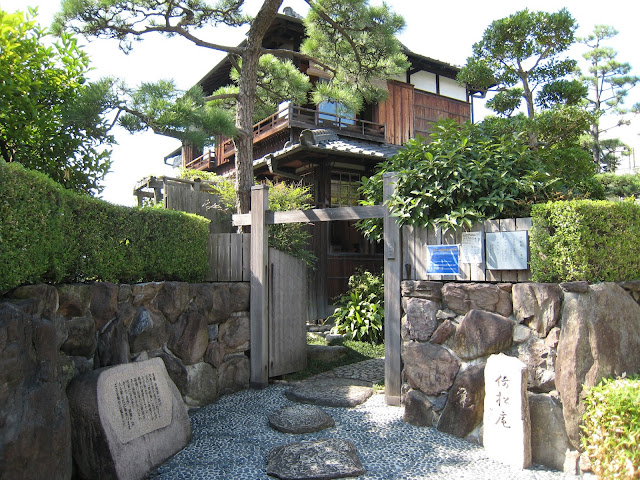 [Entrance to Isho-an]
Tanizaki lived here from November 1936 to November 1943, for seven years - a very long time for him to live in one and the same house, so he must have really liked Isho-an. In fact, in 1943 he did not want to leave but was forced to do so as his landlord planned to sell the house. Isho-an means "A house that leans on the pine trees" - a name that suited the original loation, as the pinetrees at the riverbank could be seen above the low wall that surrounded the house. Now Isho-an almost stands under the shadow of the elevated railway of the Rokko Liner and it rattles and shakes when a train passes. Perhaps it was not wholly accidental that the name of Tanizaki's third wife, whom he had married in 1935, was Matsuko - written with the charater for pine tree. She was a very practical woman and I guess Tanizaki also leaned a bit on her... 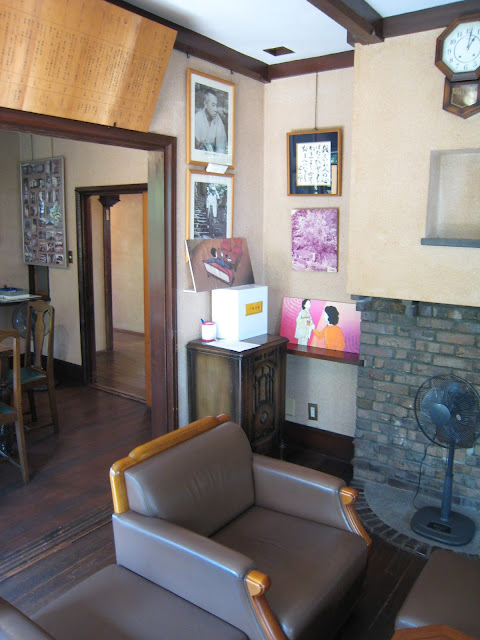 [Sitting room. The furniture is not original]
The house has many small interesting details. Note the dining room table which though small, can be extended - an example of the rationalist simplicity Tanizaki liked. The lamp hanging on the ceiling in the sitting room is a copy of the original and expresses Tanizaki's dislike of the bright lights you usually find in Western-style rooms: as stated in his In Praise of Shadows, he preferred half-dark and shadowy spaces, so the bottom side of this lamp is closed, and the light is only indirect. 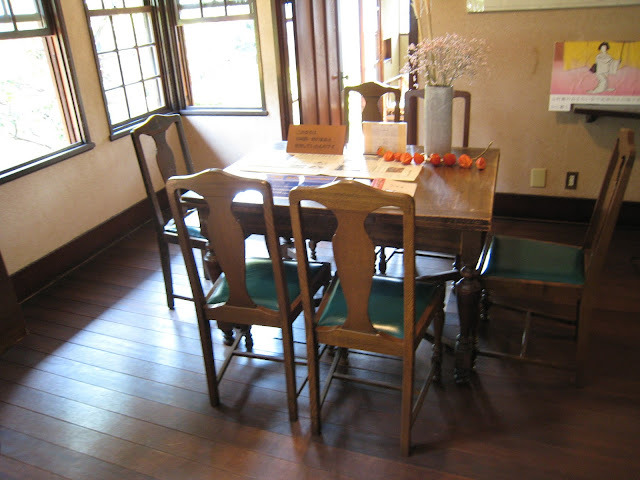 [Dining room. The table and chairs are original]
Tanizaki's wife Matsuko was from an old Osaka merchant family. While her elder sister Asako ran the family business, Matsuko took care of het two younger sisters Shigeko and Nobuko. She also had a daughter, Emiko, from her former marriage. These four women moved in with Tanizaki, something he probably was not unhappy about as he liked being among women. The house has two Western rooms and one Japanese room of 4.5 mats on the ground floor, where I also found a small room now used as office, the kitchen, the bathroom and the toilet. Upstairs were three tatami rooms, of 8, 6 and 4.5 mats. Not a bad space for two persons, but five, who are all grown-ups? How could Tanizaki find the peace and quietness to work? Isho-an is the sort of frail, traditional structure where you can be heard through the whole house even when only clearing your throat...

Well, Tanizaki did and did not. On the one hand he built a separate study in the garden of 6 and 3 mats, as his private creative domain, that unfortunately does not exist anymore. And on the other hand, he produced very little while living in this house. That was not only for lack of concentration - it were the war years and censorship was severe, so it became increasingly difficult for Tanizaki to publish his literature that was considered "too decadent." During the early part of his stay, he worked on the first version (there would be three!) of his translation into modern Japanese of the 11th c. Genji Monogatari, Japan's greatest classical novel. Not coincidentally, by the way, this is also a story about one man among many women... But even this translation of classical literature was censored in those terrible years... 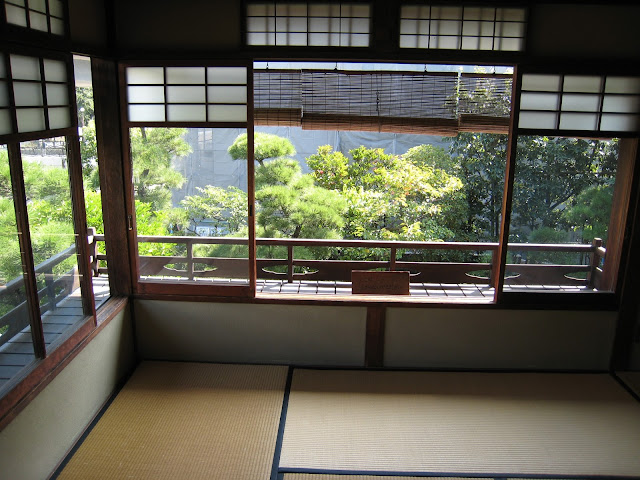 [Upstairs room]
For the rest, Tanizaki published nothing, but he started making sketches and notes and finally started writing what would become his own greatest (and now firmly classical) novel: the Makioka Sisters. This novel had a long gestation period and was born out of his life with Matsuko and her sisters: Mrs. Tanizaki became Sachiko in the novel and the sisters Asako, Shigeko and Nobuko correspond to Tsuruko, Yukiko and Taeko, while daughter Emiko became the novel's Etsuko. Much of the action in the novel is based on events in the lives of Tanizaki and his family in the late 1930s. I am not talking about the larger plot - the work was not autobiographical but purely a work of fiction - but about the small, seemingly inconsequential details of daily existence that together give life to the novel. Countless small facts from life at Isho-an and realistic details about Kobe / Ashiya found their way into Tanizaki's notebooks and subsequently into the novel. But as said above, at the same time the novel is a carefully structured work of fiction and not a record of Tanizaki's world from 1936 to 1941. Much that happens is fabricated, the characters are changed to suit the story. 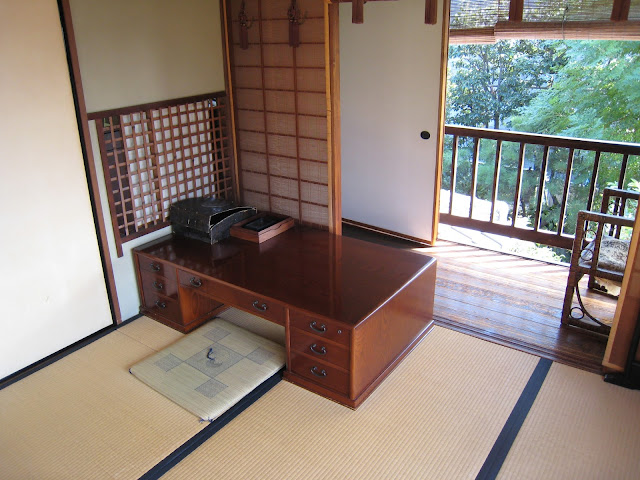 [Another upstairs room. The desk is not original]
Although there are several plot-lines in The Makioka Sisters, such as the attempts to marry off the third sister Yukiko, and the affairs of the fourth sister, Taeko (who conforms to the archetypal femme fatale in Tanizaki's works), the book's charm comes from the descriptions of daily life such as a family outing to view cherry blossoms. It is no exageration to say that The Makioka Sisters was born from Tanizaki's life in Isho-an... The book was finally completed after the war and published in 1948. The novel was an instant popular success, not only because of its qualities as a masterwork, but perhaps in the first place because the evocation of the life of an upper middle class family in the 1930s struck sentimental chords - a way of life that had been solidly wiped away by the war.