Hyakunin Isshu (One Hundred Poets, One Poem Each): Poem 23 (Oe no Chisato) 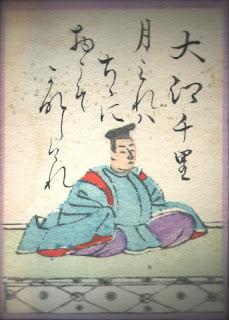 
When viewing the moon, the poet experiences the sad feelings brought about by autumn.

The idea that autumn was a season of sadness (and, for example, not of joyful harvesting) was introduced by Chinese poetry and had become conventional in the early Heian-period (in the course of the 9th c.). It was often combined with feelings of loneliness.

It is perhaps not coincidental that the present poet, Oe no Chisato, was one of the most famous poets in Chinese of his day; he also created a bridge between Chinese and Japanese poetry by writing the Kudai Waka in 894, where he composed 110 waka poems each based on a line of Chinese shi-poetry.

Although not part of the Kudai Waka, also for the present poem a Chinese origin has been suggested: in the Yanzilou sanshou, three jueju by Bai Juyi (772-846) which were also included in the Japanese anthology Wakan Roeishu. The first of these was probably alluded to by Oe no Chisato and is as follows:

The bright moon fills my window, frost fills my curtains
My blanket is cold, the lamp's last light brushes my bed.
In Swallow Tower, the frosty moonlit night,
Since autumn came, is for me alone drawn-out. 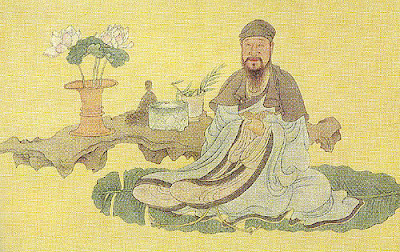 Bai Juyi wrote these poems about Panpan, a singing girl who after her patron (a minister) died, remained true to him and never married - she continued living alone in a tower called Swallow Tower on his estate. Although the poem by Oe no Chisato was in later times read as a lament by the poet himself, from this link with Bai Juyi it is clear that the speaker of the poem was intended to be a woman, the singing girl. Oe however turns the meaning of the last line on its head: Where the Chinese says that "since autumn came, the frosty moonlit night is long for me alone," Oe maintains in contrast that "it is not autumn for me alone."

Oe no Chisato was a nephew of Yukihira (poem 16) and Narihira (poem 17). He was a Confucian scholar and waka poet and flourished around 889 to 923. Ten of his waka were included in the Kokinshu.