Even today, that Kyoto is overrun by hordes of tourists, it is still possible to find quiet spots. One beautiful autumn day, we happened to find a quiet road (away from crowded Pottery Lane) from the Gojo crossing to the Higashiyama range and the grounds of Kiyomizu - the Road of the Dead, as the path cut through the immense graveyard belonging to the Nishi-Honganji Temple. 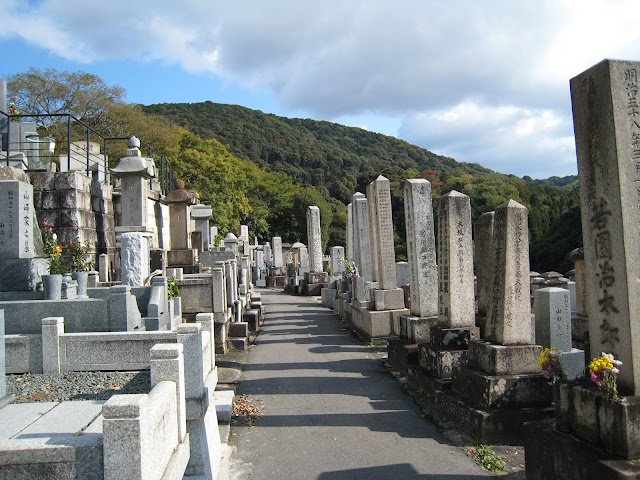 You will find the entrance to this little road between Gojozaka and the stone bridge leading to the Otani Honbyo, the funerary temple of Nishi-Honganji, to the right of a small drugstore. It leads up the hill with temples to the left, and the wall of the Otani Honbyo to the right. Where the Otani Honbyo grounds end, the real graveyard starts... We skipped the Otani Honbyo temple this time, as there was a funerary ceremony going on, moreover part of the buildings was being restored and therefore packed in the usual plastic sheets.

In the maze of the graveyard, we followed signs pointing to the site where Shinran, the founder of the sect, was cremated (called dabisho; his ashes are buried in the Otani Honbyo, at least part of them, because the sister-temple, Higashi Honganji also claimed its share of the heritage). He died in 1263 at the advanced age of 90. We found the site incongruously in a sort of pit between the overflowing graveyard and some ordinary houses. The fact that the honored founder was cremated and buried here, forms of course the inspiration for his followers to do the same. 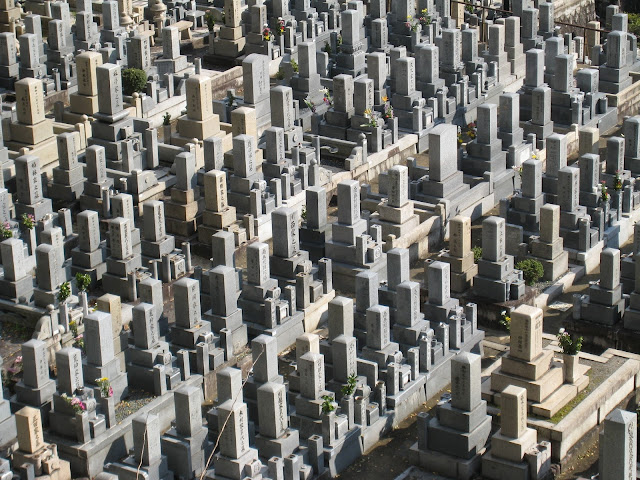 The shops selling gravestones, flowers and incense were all open and doing brisk business. Although not a Buddhist festival, we saw many people taking the opportunity of this holiday to visit the family graves to clean them. When you come here during the Obon Festival of August, relatives place lanterns with candles on the graves, transforming the cemetery into a fairyland.

The green and brown hills were beautiful when we entered the valley, and contrasted pleasantly with the gray gravestones. The 40,000 sq. meter large graveyard dates in its present form from the early 17th century, but I do not know if there are any really old gravestones left. The temple religiously checks the annual payments for the gravesites (this obviously is an important money cow) and attaches a yellow notice to graves whose owners are in arrear. I presume they will be demolished and the site sold again.

As every graveyard, this one, too, formed a small history lesson. The tall, pointed stones lining the path at fixed intervals belong to soldiers who died in China during the war. The sides of the stones were inscribed with the names of all the battles they took part in. 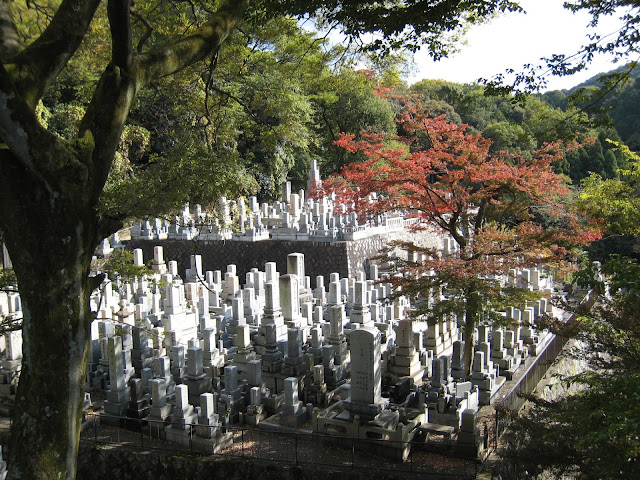 We also saw some beautiful autumn leaves, although most trees had probably been cut down in order to make space for the graves, which took up every available inch. The path came out into the grounds of Kiyomizu, next to a small restaurant selling amazake.

We had a great view over Kyoto, with Kyoto Tower visible in the distance. There was already a graveyard here in the Heian-period, called Toribeno, so for ages the people of Kyoto have been bringing their dead to this mountainside.

One last thought: of course these graves only contain ashes, not bodies, but still, they are sometimes uncomfortably close to each other. In life, people here live in houses that are too small for comfort, in death they are buried in tiny graves, and all the time they are as closely lumped together as a bowl of sticky rice...
Posted by Ad Blankestijn