A provincial town in the France of 1958. We see an attractive square with somewhat ramshackle houses and bistros, a street sweeper and horse-drawn cart gathering litter. Stray dogs are playing in the square and suddenly run away one after the other, to the suburbs. There a dachshund enters the gate of a modern house. The suburbs are a big contrast to the romantic town: Everything is sterile here, from the modern factories to the super-automated homes. And the inhabitants of course drive big American cars. 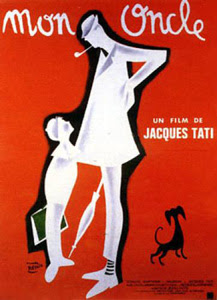 This is the home of the Arpels and their young son Gerard. Mr Arpel has a management job in a factory that produces plastic hoses; Madame is the sister of Monsieur Hulot. Everything in their house is automated, from the electric front door, the wonderful kitchen to the ugly fountain in the garden. The furniture is as all avant-garde, better fit for a museum than to sit on. Monsieur Hulot often visits his sister and is good comrades with his nephew. Although he is happy as he is, the Arpels want to reform him by coupling him to the woman next door during a disastrous garden party (that fountain!), or by giving him a job in the factory. The film is an obvious critique of consumerism and modernism.

Mon Oncle by Jaques Tati (1907-1982) is a comedy, but it is almost Zen-like in its quietude. There could be no greater contrast to the capers and gags of Charlie Chaplin or Buster Keaton, it could be no further removed from the noise of contemporary comedies. People do not fall down or get hit by bricks. They don't chase each other. They almost don't speak - Mon Oncle almost could be a silent film.

The film is built around the character of Mr Hulot, played by Tati himself. Monsieur Hulot has a kind character, but he is also gauche and socially helplessly inept. He always wears a shoddy raincoat, a hat and invariably carries an old umbrella, even in good weather. His trousers are too short and reveal his striped  socks. He also smokes a pipe, which he cleans by knocking the ashes out on the soles of his shoes. He is also very phlegmatic and never gets excited. But above all, he is completely harmless.

Tati's humor is of the quiet and under-cooled type. This film won't have viewers rolling on the floor from laughter. Perhaps you will smile sometimes. But after viewing the film, you will feel in a good mood that lasts for a long time and many images of the film will remain with you.

Tati was born in France from a Russian father, descended from the nobility, and a Dutch mother. Tati made only six full length feature films, in which he always played the leading role of Mr Hulot. He made his films with great care and craftsmanship.