Akutagawa Ryunosuke (1892-1927) was a short story writer, essayist and haiku poet who died young at age 35, but whose about one hundred stories and novellas have become a hard and fast part of the canon of modern Japanese literature, not in the least thanks to his stylistic perfectionism and keen psychological insight. Shortly after Akutagawa was born - with the original family name Niihara - , his mother went insane, and he therefore was adopted into the family of his maternal uncle, whose surname he assumed. From a young age he was a voracious and eclectic reader of Western, Japanese and Chinese literature, and at Tokyo University, where he went in 1913, he studied English literature. After graduation, he briefly taught English, before deciding to devote his life wholeheartedly to literature - he was a fixed contributor to the Osaka Mainichi newspaper. He married in 1918 and had three sons, one of whom became the famous conductor and composer Akutagawa Yasushi.

Akutagawa's first short story to be published was Rashomon, in 1915, and it was praised by veteran author Natsume Soseki, who became a sort of mentor. At this time Akutagawa also started writing haiku, perhaps following the example of Soseki - it is a genre in which Akutagawa's efforts only in recent times have been properly evaluated. In the next years, Akutagawa especially wrote stories set in the past, reinterpreting classical works or historical incidents, and infusing them with modern psychology. But he also wrote modern stories and, in his final years, autobiographical stories, which show his emotional exhaustion.

Akutagawa suffered from insomnia and hallucinations, a condition that had been worsened by an unhappy stint in China in 1921 for the Osaka Mainichi. While searching for new themes in his novels at a time that the "I-Novel" dominated the literary scene, he was harassed by personal misfortune: the burning down of his sister's house, the suicide of that sister's husband, the fact that as head of the family he had to look after those family members, a burden for which he didn't have the strength - also financially, as he only subsisted on his meager income as a story writer. Increasingly paranoid, in the end, he fled the world he found so uncomfortable. On Sunday, July 24, 1927, Akutagawa took a fatal dose of a sleeping aid (Veronal, a barbiturate with which Virginia Woolf had tried suicide but failed) and passed away aged 35. Beside his pillow he left a note in which he explained that he had killed himself because of “a vague unease about my future.”  In 1935, Akutagawa's friend, the writer Kikuchi Kan established the Akutagawa Prize, which is today is still considered as the most prestigious Japanese literary award for aspiring writers. 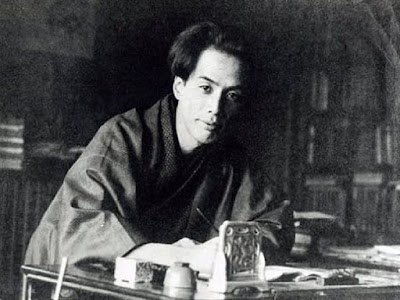 The best stories by Akutagawa are in my view:
And here are two great stories that as far as I know have not yet been translated:


Besides somewhat older translations which are still being reprinted by Tuttle, we have two volumes of excellent modern renderings of Akutagawa's prose:

Rashomon and Seventeen Other Stories, translated by Jay Rubin and with an introduction by Murakami Haruki (Penguin Classics, 2006)

There is only an overlap of a few stories between these two volumes. Rubin - well-known for his translations of several novels by Murakami Haruki - includes both a generous selection of the historical tales, modern fiction, and autobiographical works, while Keio University Professor De Wolf mostly selects stories set in modern times. Rubin includes nos 1-3 and 5-8 from the above list, and De Wolf nos 2, 4, 9, and 10.