In Kyoto, you find small temples in the most unexpected nooks and crannies. A very interesting one is Tako Yakushi (officially called Eifukuji), sitting right in the middle of youth paradise Shinkyogoku, in the center of the city. 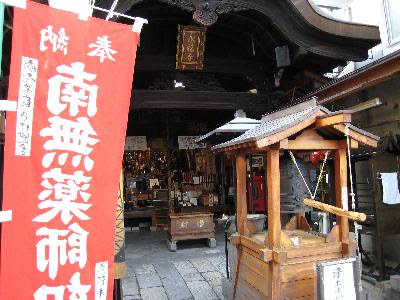 The temple originally stood in Nijo Muromachi and was founded in 1181. The engi, retold in the temple's pamphlet, informs believers about the miraculous origins of the temple. Here it is in my free translation:


In the Muromachi ward of Kyoto lived a rich man who shaved his head and sought his refuge in the Yakushi Buddha of Enryakuji on Mt Hiei. Year after year, he made monthly pilgrimages to this Buddha. But as the years went by, he became old and weak, and one day, he spoke in front of the Yakushi Buddha:

"I am getting too old to continue my practice of monthly pilgrimages. Please let me have your image to place in my home, Lord Yakushi!"

After uttering this wish, the devout believer descended from Mt Hiei. That night, the Yakushi Buddha appeared to him in a dream and spoke: "In a certain place, a stone Yakushi statue carved by St Dengyo [i.e. Saigyo, the founder of Enryakuji and Tendai Buddhism] himself has been buried. You can take that home."

Full of joy, the next day the wealthy man climbed the mountain and when he dug in the indicated spot he indeed found a holy image hewn from stone that emitted a wondrous light.

He took this image home and built a hall of six by four bays for it. This temple was called Eifukuji, or Temple of Eternal Bliss, and it greatly flourished and yound and old, men and women, flocked in great numbers to the temple to pay their respects.

In the Kencho period of Emperor Gofukakusa (1249-56) there lived a monk called Zenko in this temple. It happened at one time that his mother fell ill. Although he took good care of her, she did not recover and spoke from her bed to Zenko: "If only I could eat some octopus (tako), I like that so much from since I was young, that my illness might get better!"

Zenko was not allowed to buy octopus, a living being, for a meal because he was a Buddhist monk and therefore he was greatly distressed. Still, the thought of his sick mother was stronger than his awe for the precepts, so he took a wooden box in his arms and went to the market to find an octopus.

When he walked back, some people became suspicious that he, a monk, had bought a living creature for food and they followed him all the way to the gate of his temple, pressing him to show what was in the box. Zenko could not refuse and prayed with all his heart to the Lord Buddha: "I have only bought this octopus to help my mother recover from her illness. Lord Yakushi, please help me out of this difficulty!"

When he opened the box, the eight-legged octopus had been transformed into a set of eight sutra scrolls and a light shone from them in all four directions.

The people who saw this all pressed their hands together in prayer and sang the praises of the Lord Yakushi, the Buddha of the Lapis Lazuli Paradise.

Strangely enough, the scriptures turned again into an octopus who then jumped into the pond in front of the temple where he changed into the form of the Yakushi Buddha. He emitted a green Lapis Lazuli light and when this struck the head of Zenko's mother her illness was immediately healed. She rose from her bed and in a loud voice sang the praises of the Lapis Lazuli Buddha, over and over again.

Thus the temple came to be known as Octopus Yakushi. From then on, when people visited and prayed for relief from illness, they immediately were healed; when women prayed for children, they were blessed with offspring; and all difficulties and problems were eliminated.

This reached the ears of His Majesty the Emperor and in 1441 the temple received an Imperial License. Since then prayers have been said here for bountiful harvests, the Emperor's long life, and the peace of the nation. When one prays ardently for divine protection, no wish is left unfulfilled: in the present world the seven ills are immediately dispelled and the seven blessings immediately granted.

Toso, o-toso 屠蘇 A spiced medicinal sake traditionally drunk during Japanese New Year celebrations to pray for a healthy and happy year and a... 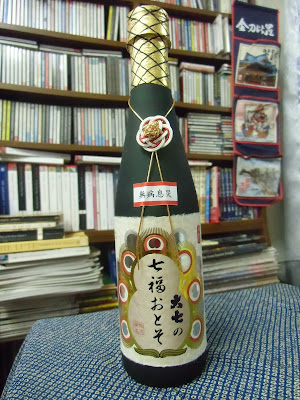