Empty hills, no one in sight -
you only hear the echo of voices.
Late sunlight enters the deep forest,
shines on the green moss again.

Sitting alone among cool bamboos,
playing the zither or long whistling,
deep in the forest, unknown to anyone:
the bright moon comes to shine on me.

You come from my old village
and must know about things there -
in front of the gauze window, yesterday,
had the winter plum already blossomed?

Getting off my horse, I offer you wine,
and I ask where you are going.
You say your ambitions were not fulfilled,
and you return to the flanks of South Mountain.
Just go - I will ask nothing more -
the white clouds are endless there.

I have sent you off in the hills,
the sun sets - I shut my rustic door -
the spring grass will be green again next year,
but you, my prince, will you be back?

The morning rain at Weicheng drenches the light dust,
the inn is surrounded by the fresh green of the willows.
I urge you to drink one more cup of wine -
west of the Yanguan Pass, you don't have any old friends.


(7) Sitting alone on an autumn night

Sitting alone, sad at my gray temples,
an empty room, almost the second watch at night.
In the rain, the hill fruits fall,
under the lamp, the crickets chirp.
My gray hair will never change,
the philosopher's stone is unattainable -
the only thing that fixes old age,
is to study Nirvana.

Since the middle of my life, I am much drawn to the Way,
late in life I made my home at South Mountain's slope.
When I feel like it, I go there on my own,
I alone know aimlessly its beauty.
When I walk to the head of the brook,
or sit and watch the gathering clouds,
I may meet an old man from the forest -
our talk and laughter make me forget to go home.

[After Wang Wei's "Snow Over Rivers and Mountains"
by Wang Shimin]

Wang Wei (699–759) was a Chinese poet, painter, calligrapher and musician of the Tang period. He was one of the most famous poets of his time - some 400 of his poems survive.

Wang Wei was born into one of the most important families of his day. He came to the cosmopolitan capital Changan at an early age (19), where he drew the attention of the highest circles through his gifts as a musician and poet. In 721 he obtained the prestigious jinshi degree in the Chinese exam system. In the course of his long and mostly successful civil service career, he was a few times for short periods transferred to the provinces, but the last twenty years of his life he spent almost continuously in the capital or on his estate south of Changan. In his private life he was a devout Buddhist.

In his lifetime, Wang Wei owes his fame as a poet in the first place to the occasional poetry that he wrote in large quantities as an official at court and in the capital (as is true of most other Chinese poets), but in later centuries and in the West it was his landscape poetry that was in the first place admired. This landscape poetry (in which the poet as a subject is hardly present) has been associated on the one hand with Wang Wei's Buddhism, and on the other hand with the art of painting. In ancient China, the contemplation of the landscape was regarded as a meditation on the Way and Buddha nature, which are especially clearly present in undistorted nature. The relationship between Wang Wei's poetry and painting has been described as "in his poems there is a painting, in his paintings there is a poem." Note that Wang Wei was not a mere superficial landscape poet: he was first and for all a mystical and religious poet. 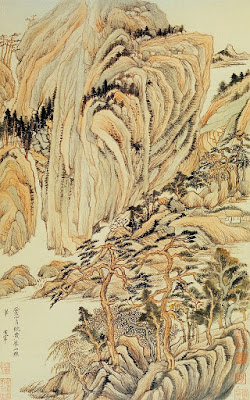 ["Landscapes in the Manner of Old Masters" (Wang Wei),
by Dong Qichang]

Notes
(Poems 1 and 2) These are 2 poems from the 20 poem "Wang River Sequence", which was calligraphied on a landscape scroll, together with 20 poems by Pei Di. As with all Wang Wei's paintings, only some later copies survive and all originals have been lost. The poems describe scenes at Wang Wei's country retreat in the hill valley of the Wang River. It is a very characteristic work, and the individual poems are often anthologized.

(Poem 3) This is the middle one of three poems "without title."

(Poem 4) Partings between friends and colleagues were an important social occasion for poetry writing. Most Chinese poets were government officials who would get a new assignment in the immense empire every three or four years, so partings among colleagues were frequent. The person who was leaving would be accompanied part of the way, and then a farewell banquet would be held. The present poem was translated into German by Hans Bethge and used by Mahler for his Das Lied von der Erde (see my article Mahler's The Song of the Earth and Chinese Poetry elsewhere in this blog). Rather than a conventional parting poem, it seems that the poet is speaking to himself - not successful in his official career, he decides to start living in retirement on his estate by South Mountain. It is one of Wang Wei's most famous poems.

(Poem 6) Idem. One of the items in Ezra Pound's Cathay is based on this poem. The poem became especially popular when it was set to music as a song of farewell.

(Poem 7) The term used for Nirvana is wusheng (non-birth; in Japanese musho), as Nirvana is beyond the realms of birth and death.

(Poem 8) South Mountain (Zhongnanshan) was to the south of Changan; Wang Wei had his retreat in its foothills (like many wealthy families from Changan).

Books of the Quan Tangshi that include collected poems of Wang Wei at the Chinese Text Project:

Lyric Poetry Around the World Index