On Passing the Ruined Capital of Omi
Kakinomoto no Hitomaro

Since the glorious reign
of the Kashihara Sage-Ruler,
by Jewel-Sash Mount Unebi,
each and every of the gods,
appearing in one line like spruce trees,
has exerted power over the realm beneath the sky.

Yet the heavenly lord, divine sovereign,
(whatever his intent)
left Yamato so full of the azure,
crossed the Nara hills so rich in green,
to exert power over the realm beneath the sky
from a remote place beyond the far heaven,
in the Land of Omi of the Racing Rocks,
in the Palace of Otsu of the Lapping Waves.

Cape Kara of Shiga of the Lapping Waves,
though you are unchanged,
in vain we wait for the courtiers’ boats.

Owada Port of Shiga of the Lapping Waves,
though your waters are still,
how could we meet the men of long ago? 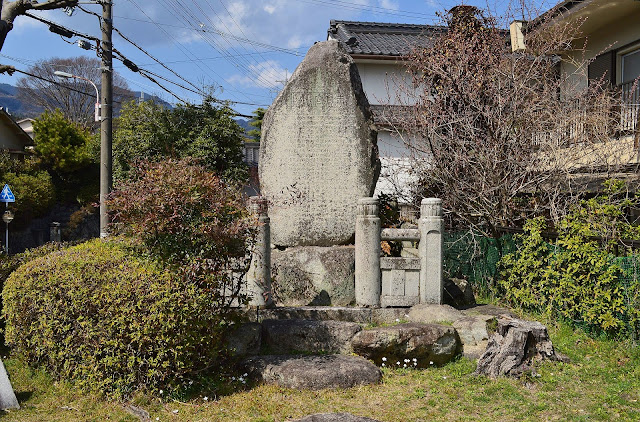 [Memorial stone on the site of the Omi Palace]
Kakinomoto no Hitomaro (660?-720?; fl ca 685-705) was a Japanese court poet serving Emperor Tenmu (r. 672-686), Empress Jito (r. 686-697) and Emperor Monmu (r 697-707). Hitomaro is by far the most representative Manyoshu poet and, with Saigyo and Basho, he has been called one of the three most esteemed poets in Japanese history. Many of his poems were of a public nature, praising the imperial house or containing solemn elegies about deceased members of the imperial family, but he also wrote work of a more personal type, such as an elegy on the death of his wife. Hitomaro incorporated elements of the national mythology in his poetry, and in his poems of praise splendidly sing about the natural scenery and divinity of the Japanese isles. Hitomaru fused refinement of expression with a feeling of majesty. For Hitomaro's poem included in the anthology "One Hundred Poems, One Poem Each" see my article on his poem on the copper pheasant. 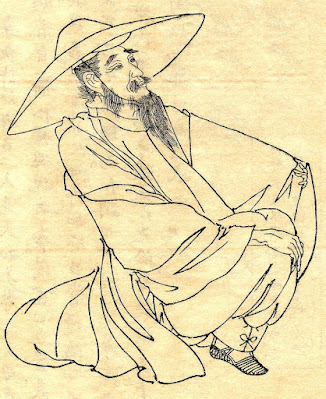 [Fantasy portrait of Kakinomoto no Hitomaro]
The above poem, with as subject the ruined capital at Otsu, was written during the reign of Empress Jito. Contrary to the other long poems (choka) by Hitomaro, this is not a celebration of the glory of the dynasty, but a poem of grief for a vanished time. Emperor Tenji had moved the palace from Asuka (in the province of Yamato, where it had always been located until that time) to Otsu, on the shore of Lake Biwa, in what was in the past the province of Omi and now is Shiga prefecture. He and his son ruled from this Omi Palace from 667 to 672, so it was just a brief interlude, which moreover ended in war.

Emperor Tenji (r. 662-671) had named his brother Prince Oama as his successor, but just before his death, he changed his mind, and transferred the succession to his son, Prince Otomo. The ensuing Jinshin War was won by Prince Oama, who moved the capital back to Asuka and reigned as Emperor Tenmu. He was succeeded by his wife, Empress Jito, who was in fact Tenji's daughter (and his own cousin). For the court of Empress Jito, the Omi capital was a somewhat sensitive subject: her own father had moved the palace there, so the move could not really be criticized, but on the other hand the present court was the product of a war that had been waged on the Omi capital. For more about Empress Jito and also about the Three Mountains of Yamato, see Poem 2 in my series "One Hundred Poets, One Poem Each".

Besides a lament for a bygone times and an elegy on a ruined city (as we often find in literature from all over the world), Hitomaro's poem may also well have been an attempt to ritually pacify the spirits of the dead courtiers of the Omi capital, as Haruo Shirane surmises. 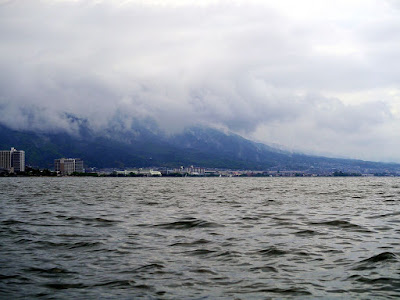 The above translation is my own, but borrows some ideas from both Shirane (p. 79-81) and Cranston (p. 190-192). Shirane is more literal, Cranston more gorgeous. I translate as usual as literal as possible.

Lyric Poetry Around the World Index