Hozugawa-kudari, "Shooting the Rapids in Kyoto"

The Hozu River is the designation for the upstream section of the Katsura River, between the Hozu Bridge in Kameoka City and the Togetsu Bridge in Arashiyama. The river originates in the Tanba mountains and finally, south of Kyoto, flows into the Yodo River. It changes name three times, because the upper reaches above Kameoka are called Oi River. Kameoka, a city of 85,000 in the basin NW of Kyoto, used to be a commercial center and a post town. In the 16th c. it was ruled by Akechi Mitsuhide, the warlord who eventually killed Nobunaga. 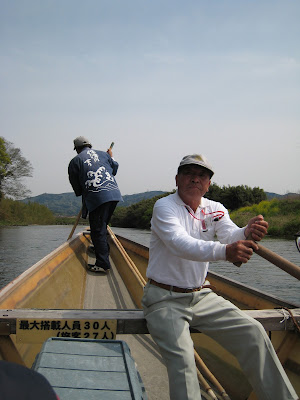 [Two of the three boatmen of the Hozugawa-kudari trip]

The Hozu River is about 16 kilometers long and snakes its way through the highland between Mt Atago and Oinosaka, at an elevation of 400 meters. It has carved out a deep gorge with sharp V-curves, strange rocks and fantastic cliffs. Although it was already used for the transport of goods to the capital in the Heian period, concentrated shipping only became possible in 1606, after engineering work under the direction of Suminokura Ryoi. 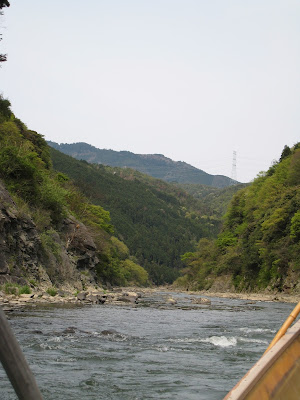 [Shooting into the canyon]

Swift, flat-bottomed wooden boats would transport rice, vegetables and firewood from the regions north of Kyoto to the capital. The boats were brought back by towing them, a laborious process taking five hours. Some parts of the tow path laid out by Suminokura are still visible, as are the rearrangements of rocks to make the river passable. One huge rock was even split apart by heating it and then pouring water on it. 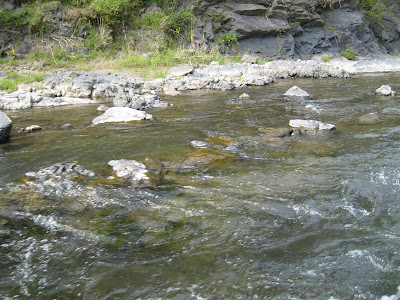 The transport boats lost their job when the railroad between Kyoto and Kameoka was built around 1900, but about fifteen years later they had transformed themselves into a flourishing tourist industry - which today is going stronger than ever. "Shooting the rapids," the Hozugawa-kudari as it is called in Japanese, takes between 75 and 120 minutes, depending on the force of the stream and the season. 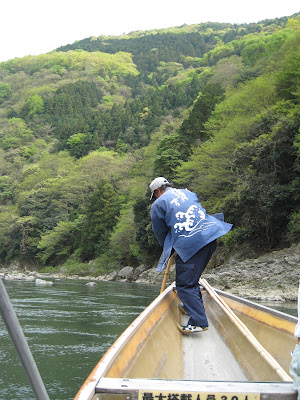 The flat-bottomed boats are operated by three people, two with a long bamboo pole in the front and back to push off against the rocks, a third one to row when the stream is not forceful enough to carry the boat along. The ride is beautiful for its scenery, especially in sunny weather, from springtime with cherry blossoms along the banks, through autumn with its red maple leaves. For an extra thrill, the boatmen steer the small craft on purpose at a short distance of the sharp rocks, but the only real danger are falling stones and the splashing waves. 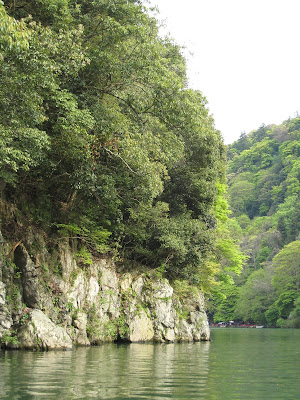 [Gliding through the fresh green of late April]

As usually in such situations, the human imagination has worked its Rorschach fantasy on the rocks along the way, and so we have frog and lion rocks, a mirror rock and a screen rock. You will also see the Lord's Fishing Spot, where Akechi Mitsuhide used to angle. In one spot stripes on the rocks are pointed out as being the traces of the tow ropes. In other places, where the boats are regularly pushed off with the bamboo sticks, indents are visible in the rocks, and it is the pride of the "pusher" to hit the exact spot. There are several bridges over the river, for the present railroad to Kameoka and beyond, and for a touristic train ride (Torokko Resha) with open cars that runs between Sagano and Kameoka over the old railroad. 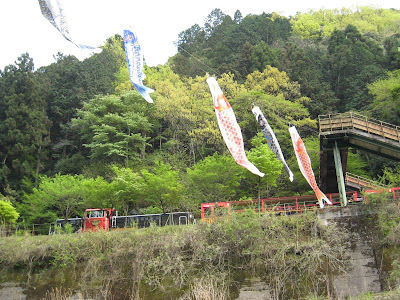 Suminokura Ryoi (1554-1614) was a wealthy merchant from Kyoto. In the 1590s Hideyoshi granted him a license for overseas trade with what is now Vietnam. This endeavor brought in huge profits for Suminokura and his son Soan - until the Tokugawas closed the country in 1635. Suminokura Ryoi used his fortune to open various rivers around Kyoto for commercial navigation (and new profits), the most important ones being the present Hozu River and the Takasegawa Canal he had dug along the Kamo River (which was too erratic in its water levels to use for regular transport services) south to the Yodo River. 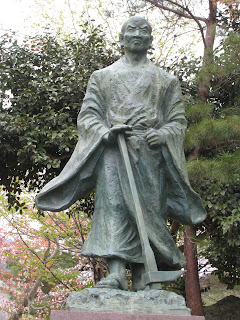 A statue of Suminokura stands in the Kameyama Park along the Hozu River. It is in a rather heavy, almost Socialist-Realist style - as a Chinese "hero of the people." On the opposite bank stands the Daihikaku temple, built by Suminokura Ryoi as a monument to the workers who lost their lives during the sometimes dangerous labor of improving the Hozu River. 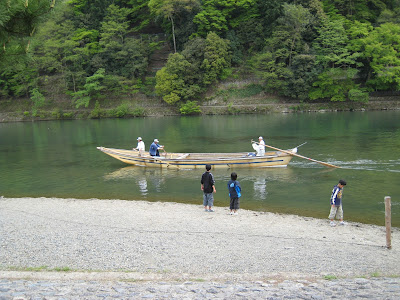