I had some doubts about Arashiyama as a hanami spot because I feared a terrible mass of people. In fact, it was not bad at all - masses do come to Arashiyama, about every weekend in season, but they tend to converge on a small area, the Togetsukyo Bridge and the street that runs in front of Tenryuji. Arashiyama and Sagano are so large and that even a large mass of people is spread thin here and few visit the more outlying temples. On top of that, not everyone has the energy to climb to the viewing platforms high up in Kameyama Park, which afford a great view of the Hozu River Gorge and the mountains clad in pinks and young greens. 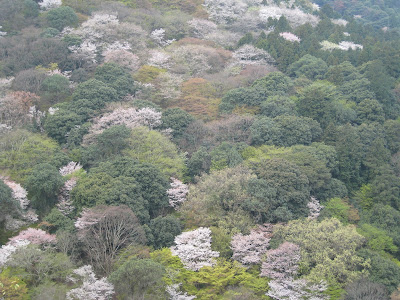 [Mt Arashiyama decked out in clouds of sakura]

And the sakura were just great - especially on the mountain slopes, where they hung as clouds of pink brocade. Apparently, the trees were planted here at the order of the 9th c. Emperor Saga, who had them brought from the sacred groves in Yoshino. 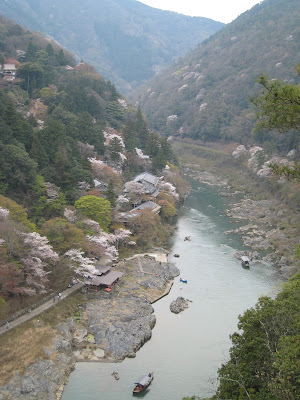 [Clouds of sakura in the gorge]

Arashiyama (or Ranzan in Chinese-style reading, as found in the names of hotels and restaurants) means "Storm Mountain" so at first sight it would not seem one of the most scenic spots in Kyoto, but that is only the name of the 381 m. tall mountain that rises up steeply on the right bank of the Hozu River here. The beauty is in the valley with its steep wooded cliffs, the river with the flat-bottomed boats that carry tourists via the gorge from Kameoka, the old-fashioned Togetsukyo bridge that spans it, the temples and their gardens, and the quiet countryside behind it all. 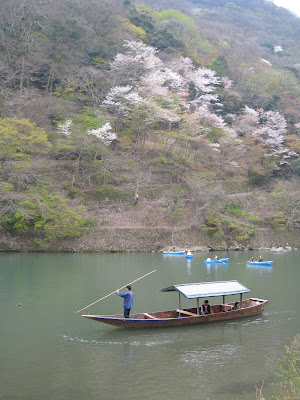 [Boat on the Hozu River near Arashiyama]

It was already a favorite spot among the Heian nobility, and many poets and writers came here for inspiration, not in the last place Basho who stayed in the Rakushisha of his disciple Kyorai. It was not only famous for sakura, but also momiji, autumn leaves. Arashiyama also figures in classical literature, from the Tale of Genji to the Essays of Idleness. 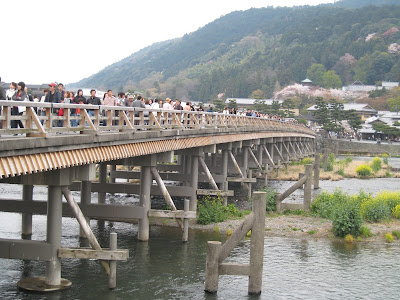 [The Togetsu Bridge ("Bridge to Ford to the Moon") has been here since Heian times. The pagoda on the opposite bank belongs to Horinji]

The temples are Horinji and Daihikaku on the west bank, and Tenryuji and Rinsenji on the east one. Tenryuji, of course, has one of the best classical landscape gardens in Kyoto, which borrows the scenery of Arashiyama. 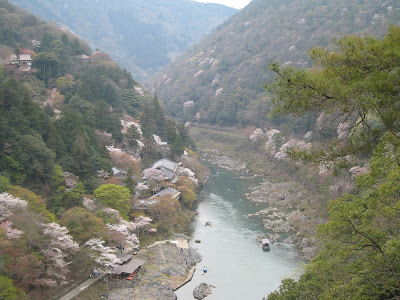 [Once more the gorge seen from Kameyama Park. The temple hall high up on the bank to the left belongs to Daihikaku Temple]

In fact, Arashiyama is beautiful in all seasons, even in winter when light snow decks the hills and the trees stand bare and brooding. Summer finds it deeply green in light rain, the summits veiled in mist. There are also several festivals. The third Sunday in May the Mifune Matsuri is held here, when decorated boats with people dressed as Heian courtiers will drift down the stream. The second Sunday in November sees another boat procession for the Momiji Matsuri.


As buses tend to get stuck in the traffic jams - especially in weekends - the fastest approach to Arashiyama is by one of the three train lines that serve it: the JR Sagano line to Saga-Arashiyama St (20 min from Kyoto St), the Keifuku-Arashiyama line from Shijo-Omiya St, or - convenient if you come from Osaka or Kobe - the Hankyu-Arashiyama line which branches off from the main Hankyu line in Katsura St.