Although late in the season, this weekend my wife and I visited the "Saigyo sakura" in what is called the "Cherry blossom Temple," Shojiji, in the hills west of Muko City. 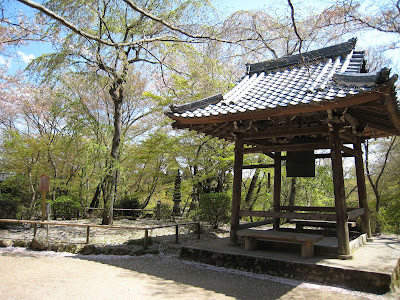 [Bell tower and Saigyo sakura (already without blossoms) in Shojiji]

Officially, there is only one "Saigyo sakura" - a tree planted by the medieval priest and poet Saigyo after he shaved his head to become a priest here in Shojiji. It is a third-generation tree, it is said, but it was already covered in fresh green leaves. Fortunately, around it there were still some other trees in bloom, and the best ones were the magnificent shidare-zakura at the back of the temple. These were just in full bloom! 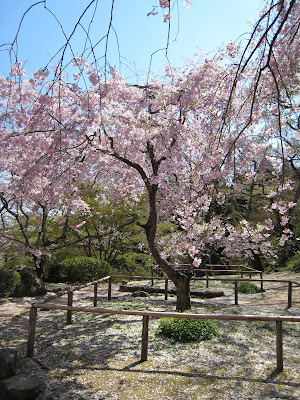 Besides the cherry trees, the temple also has a great collection of Buddhist statues, beautiful in all seasons: a Kamakura-period Yakushi statue not only carrying the usual medicine pot in his right hand (he is after all the Buddha of Healing), but with his other hand making a gesture as if to take some pills from that pot! The temple also has a full set of the Yakushi's attendants, the Bodhisattva's Nikko and Gekko (symbolizing the Sun and the Moon) and the Twelve Generals in comical poses. Saigyo was also present, in a Kamakura-period statue showing him as a lean and ascetic priest. All these statues stand in the temple's Treasure House, to which also the Rikishi deities from the temple gate have been moved for protection. 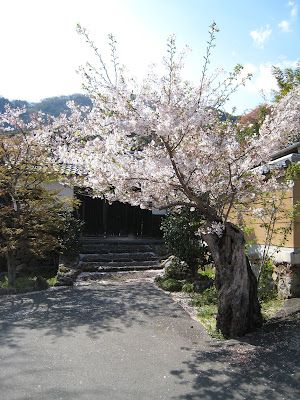 After Shojiji, we decided to visit nearby Shoboji, a temple new to us, and to our surprise, here, too, the cherry trees were in full bloom...

The Main Hall of this little known and quiet Shingon temple featured some interesting statues, such as the main image on the altar, a Thousand-armed Kannon with three faces - besides the central countenance, two extra faces look over the Kannon's shoulders in an original configuration. This statue is from the early Kamakura period. From the temple's founding (in the late Nara period, by a disciple of the Chinese priest Ganjin) dates a large Yakushi statue. Finally, I also encountered an interesting "running Daikoku" image. 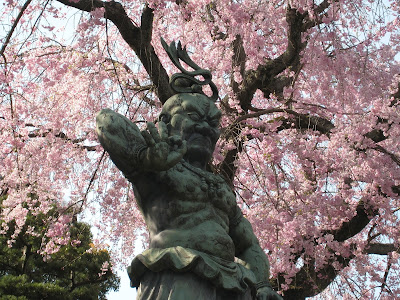 The garden of Shoboji is modern and characterized by the various large rocks which are meant to represent all kinds of animals. Such almost childish figurative thinking is far from traditional garden art, but happily you can see the rocks as just abstract elements - the resemblances with elephants and tigers are rather forced, anyway. 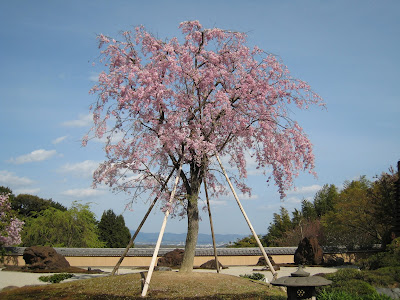 What makes the garden interesting is the shakkei, the "borrowed scenery" of the far-away Eastern Hills (Higashiyama - we are to the south here, so you can mainly see the low hills on which the Fushimi Inari Shrine stands) and, on the horizon, the imposing mountains that form the border between Kyoto and Shiga. On one of these stands the great Daigoji Temple.

It was masterful of the garden designer to plant just one slender cherry tree right in the middle of this scenery, as a foreground to the borrowed landscape. The rocks then form a sort of intermediaries that lift the eyes above the low garden wall towards the distant mountain scenery. Both Shojiji and Shoboji were very quiet, making this the ideal place to enjoy cherry blossoms.


Access: From JR Mukomachi or Hankyu Higashi-Muko Station, take a bus to Minami-Kasugamachi and then walk 15 min. Or take a bus to Rakusai-Kokomae and walk 20 min. There is about one bus per hour.

Note: Shojiji is also known for its maple leaves. In the immediate vicinity are two more places of interest, Gantokuji (Hobodaiin) which displays a national treasure Bodhisattva image of almost sensual beauty, and Oharano Jinja, a shrine set up as a local branch of the Kasuga Shrine in Nara, when the capital was transferred to Nagaokakyo in the late 8th c.