Hyakunin Isshu (One Hundred Poets, One Poem Each), Poem 3 (Kakinomoto no Hitomaro)

must I sleep alone
through the long night,
long like the dragging tail
of the copper pheasant
in the foot-wearying mountains? 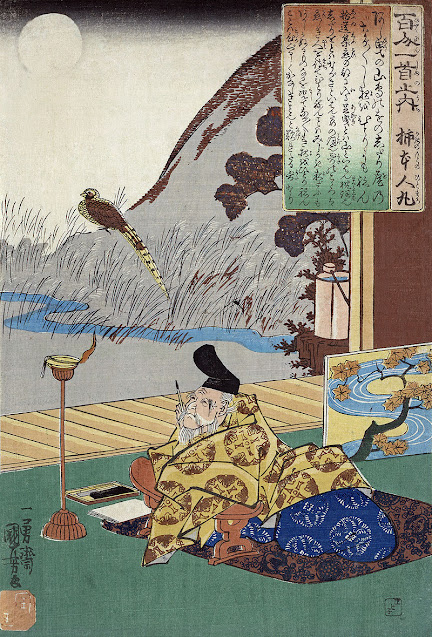 [Kakinomoto no Hitomaro and his pheasant
by Utagawa Kuniyoshi]
Notes
Commentary
Love poem set on an autumn night. The poet, unable to meet his beloved and having to sleep alone, complains of the slow passing of the night, which he compares to the great length of a pheasant's tail. And this in turn links to the folkloric belief that the male and female pheasants spent the night in different valleys. But it is a refined kind of loneliness, for the poet is also enjoying the autumn feelings.

The poem is a good example of how in Japanese poetry in general nature is used to evoke a state of mind. That is done here through the use of jokotoba, a preface, as mentioned above. Naganagashi, "long", is a pivot word as it both refers to the long tail of the copper pheasant and the long night spent alone. Note that the feelings for the beloved one are not stated explicitly, but are implied in the complaint of "having to sleep alone."

Seven different animals appear in the Hyakunin Isshu: deer (poems 5 and 83), plover (poem 78), grasshopper (poem 91), chicken (poem 62), pheasant (poem 3), magpie (poem 6) and hototogisu (Japanese cuckoo, poem 81). Deer, plovers and grasshoppers are introduced for their sad cry; the hototogisu because it was the harbinger of summer. 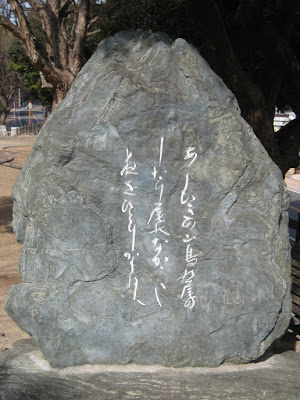 [Poem stone with the Hyakunin Isshu poem by
Kakinomoto no Hitomaro in the Kakinomoto Shrine in Akashi]
The Poet
The poet, Kakinomoto no Hitomaro (660?-720?; fl ca 685-705) was a court poet serving Emperor Tenmu (r. 672-686), Empress Jito (r. 686-697) and Emperor Monmu (r 697-707). He is by far the most representative Manyoshu poet and is also counted as one of the Thirty-six Poetic Geniuses. With Saigyo and Basho, Kakinomoto has been called one of the three most esteemed poets in Japanese history. In Ki no Tsurayuki's preface to the Kokinshu, both Kakinomoto no Hitomaru and Yamabe no Akahito were singled out as Uta no Hijiri ("Saints of Poetry").

It is fitting that Teika puts him near the beginning of his anthology. Among the poems ascribed to Kakinomoto, about 18 choka (long poems) and 70 tanka are considered as genuine - all are included in the Manyoshu. Hitomaru's art is both natural and complex. Many of his poems were of a public nature, praising the imperial house, but he also wrote work of a more personal type, such as an elegy on the death of his wife. Hitomaro is known for his solemn and mournful elegies of members of the imperial family, whom he described in his courtly poems as "gods" and "children of the sun." He incorporated elements of the national mythology as found in the Kojiki and Nihon Shoki in his poetry, and in his poems of praise splendidly sings about the natural scenery and divinity of the Japanese isles. In his personal poems, he vividly describes the powerful emotions of being separated from the woman he loved. His travel poems exquisitely describe the mood of the courtiers on these trips. He can be said to have created an ancient lyricism that expressed both human sentiment and sincere emotions. Hitomaru fused refinement of expression with a feeling of majesty. He coined many expressions that would become stock phrases in later poetry as makura kotoba, "pillow words". 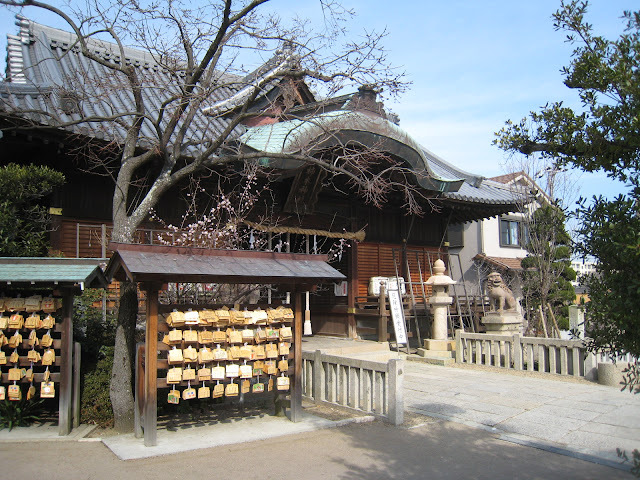 Visiting
Kakinomoto ni Hitomaru is honored in the Kakinomoto Shrine in Akashi, where poetry steles are scattered around the grounds, also inscribed with the present work. Hitomaru was deified in the centuries following his death, as a god of literature, scholarship, and fire safety (based on a pun on his name: hi-tomaru = "fire stop"). According to tradition, Hitomaro passed through the Akashi area multiple times while traveling between his home in Yamato province and his assigned district in Iwami Province, and a poem he wrote on Akashi Strait survives.

According to tradition, the shrine was founded in 887 by the monk Kakusho, in the grounds of Gesshoji temple. It was moved to its current location to accommodate the construction of Akashi Castle. In 1723 the shrine was granted the first rank in Japan's Shinto shrine ranking system and the shrine's deity was given the title Kakinomoto Daimyojin. The shrine is familiarly referred to by local people by the nickname Hitomaru-san. In the shrine grounds one also finds a monument constructed on the order of Matsudaira Nobuyuki inscribed with a 1,712-character biography of Hitomaro.
5 min on foot from Hitomaro-mae Station on the Sanyo Dentetsu line. http://www.kakinomoto-jinja.or.jp/) 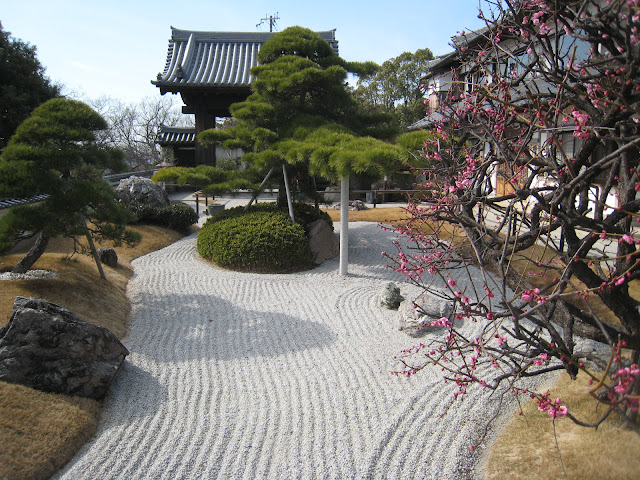 [Garden of Gesshoji Temple, the shrine neighbor
which in the past was coupled with it]