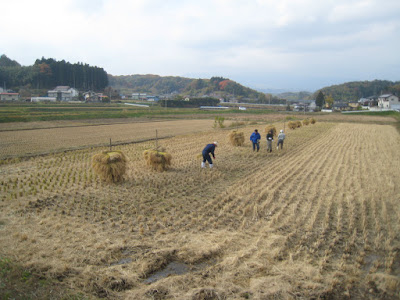 Notes
Commentary
The poems in the Hyakunin Isshu are in chronological order and the first seven poems date from the Asuka and Nara periods (7th and 8th centuries), the age of the Manyoshu.

The above is a poem admired for its evocation of the mood of autumn sadness. Teika ascribes the poem to Emperor Tenji (626-672; name also spelled Tenchi), the son of Emperor Jomei, but that ascription is dubious: a similar poem in fact appears in the Manyoshu where it is anonymous. It was first ascribed to Emperor Tenji in the Gosenshu anthology from the mid-tenth century, probably based on a tradition or document outside Manyoshu. 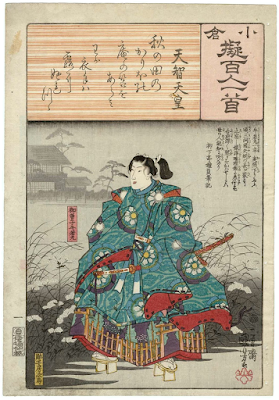 [Emperor Tenji by Utagawa Kuniyoshi (1845–1848)]
But Teika clearly believed that Emperor Tenji was the author and he must have put the present poem consciously in first position in his anthology: after all, Emperor Tenji was revered as the progenitor of the imperial line (all emperors in the Heian period stemmed from his blood line), and the connection between poetry and the imperial house was important to Teika. This poem could be interpreted as an expression of the "model" emperor's compassion for the lot of the common peasants, who had to live in leaking huts.

The poem however says little about the harshness of work in the fields but rather focuses in aristocratic fashion on the beautiful "yugen" aspect of lonely tranquility in late autumn. As such, it has always been much admired. The interesting thing is that while in classical Japanese poetry wet sleeves are usually associated with tears, because of an unhappy love affair, here the political aspect is paramount. Not all critics agree, however, and some read it as a love poem (Emperor Tenji was said to have competed for the hand of Princess Nukata with his brother and successor, Emperor Tenmu, but there is no proof for such a reading).
The poet
As crown prince, called Naka no Oe, Emperor Tenji broke the power of the Soga clan with the help of Fujiwara no Kamatari, and was also responsible for the Taika Reforms, reorganizing the government on the Chinese model. For many years he continued to rule as regent, even after the death of his mother Empress Saimei, and only was formally enthroned in 668. As Emperor he moved the capital to Omi (now Otsu in Shiga Pref.) and promulgated the Omi Code of Laws. Omi served for five years as the capital.

Visiting
There are three places associated with Emperor Tenji in Kyoto and Otsu. They can easily be visited together as they are all three located on the Keihan line to and in Otsu: 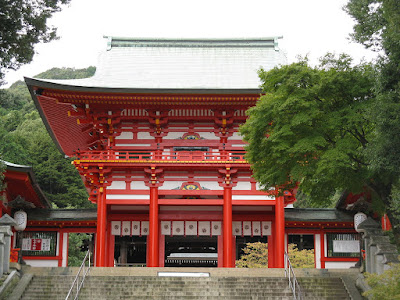 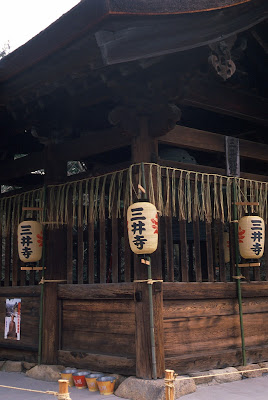